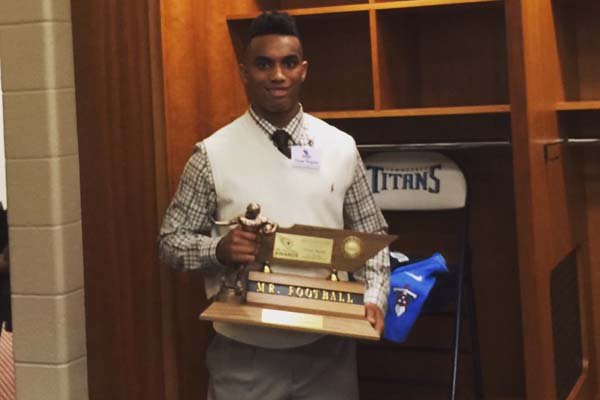 BEAVERTON, Ore. — Running back Chase Hayden, an Arkansas target, is in the spotlight because of being a high-profile and highly recruited prospect, but off the field he’s low-key and a homebody.

Quiet often an evening consists of he and his father, Aaron sitting at home and watching TV.

“Probably our biggest father and son thing is to just sit around and watch Netflix,” Aaron Hayden said. “We’ll watch the whole season of something whether it’s Narcos or Power. We just finished watching Friday Night Lights. That’s kind of his deal.”

The younger Hayden rushed for 2,625 yards and 37 touchdowns as a junior for Collierville (Tenn.) St. George's Independent School and was Mr. Football in Class 2A.

“You would think that he has all of this attention going on that he would be dating or hanging out and stuff like that, but literally he’ll say ‘Hey dad, can we go into the playroom and watch Friday Night Lights’,” Aaron Hayden said. “I’m a TV and movie guy too, so that’s kind of our biggest deal.”

Aaron, who played running back at Tennessee in 1992-1994, went on to play four seasons in the NFL. He said driving around the country visiting schools has been made the father and son bond even stronger.

“I think I have gotten to know him a lot better than I did before,” Aaron said. “When you’re in the car for six hours, five hours here or ten hours there, we’re just chopping it up. I learned a lot about him and I think he’s learning a lot about me. I’m sharing some of my war stories and he’ll tell me about some of the conversations he’s having with coaches and you’re just kind of comparing notes. It’s been a real fun process in that regard.”

Recruiting has drastically changed from the early 1990’s to now, said Aaron.

“I think the kids are under a lot more scrutiny,” Aaron said. “Everybody knows what you run, you can’t really hide if you’re not a fast kid. If you’re not an agile kid, you really can’t hide, The coaches use social media as part of their recruiting.”

The younger Hayden and his parents visited Arkansas on June 23 and he named the Razorbacks his leader after the trip. In two previous stories, Aaron voiced his approval of the Hogs and the atmosphere and Coach Bret Bielema was a major reason he was so impressed.

“We probably talked to him for an hour and 45 minutes and it was a lot about just life and not just football,” Aaron Hayden said. “That’s important to me as a dad. We’ve had some very long conversations with coach B and I hope Chase understands that doesn't happen for everybody that comes and visits the University of Arkansas.”

Bielema was well-versed on Chase, something his father didn’t overlook.

“You can tell he’s not just recruiting Chase, he knows Chase,” Aaron said. “He’s done his research. He put his film up and told us what he liked about him and he even talked about him playing in the Nickel (package) because he could cover as well. I can just tell he’s a priority for them.”

Aaron Hayden said Arkansas’ academic facilities and support for student-athletes were one of the highlights of the trip.

“They have a sociologist on staff,” Aaron Hayden said. “They have someone who’s specific job is career development and just the attention of detail they have for all student athletes is the most impressive I’ve seen out there from our visits and we’ve pretty much been all over the country. There’s some that talk about it, but there’s individual roles where that’s all you do at Arkansas.”

A very proud Tennessee alum, Aaron Hayden was surprised by the athletic facilities at Arkansas.

“I just thought the facilities were one of the top facilities around of the places we have been,” Aaron said. “I’m a Tennessee guy and I think our facilities are top-notch and I would say Arkansas is right up there with Tennessee.”