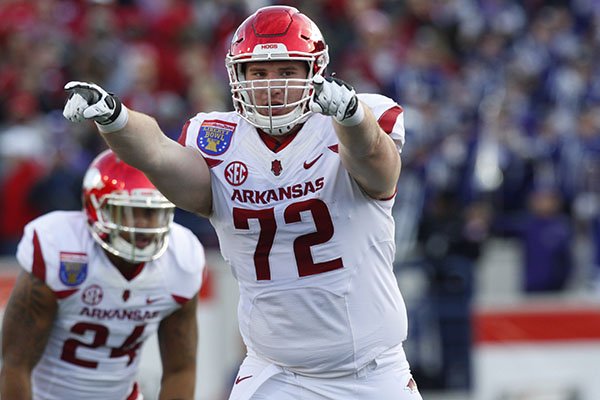 Arkansas offensive lineman Frank Ragnow lines up for a play during a game against Kansas State on Saturday, Jan. 2, 2016, at Liberty Bowl Memorial Stadium in Memphis, Tenn.

Offensive line coach Kurt Anderson also passed on identifying the first five, jokingly saying he wanted the media to have a chance to see for themselves when camp opened.

Senior right tackle Dan Skipper and junior center Frank Ragnow, who started all 13 games at right guard in 2015, are the lone returning starters on the unit.

Redshirt freshman Colton Jackson and sophomore Hjalte Froholdt wrapped up spring drills at left tackle and guard, respectively. Redshirt sophomore Brian Wallace had first crack at the vacant right guard slot, but he suffered a concussion and other physical setbacks that limited him in the spring.

Pressed further, Anderson confirmed that Skipper, Ragnow, Jackson and Froholdt would likely be manning the positions they held at the end of spring and that right guard is the "mystery" spot right now.

"We've got a lot of capable guys," Anderson said. "We've got guys that have worked their tails off and are going to fight for it. And that's not to say those other four spots are set in stone.

"There are some very capable guys that have either worked themselves into position this summer or have arrived on campus this summer and have put themselves in a position that is either going to provide depth or push guys for opportunities to play this year for the Razorbacks."

Linebackers coach Vernon Hargreaves sounded much more enthusiastic about the depth at his position compared to this time a year ago.

"With the guys coming back, all that experience you could call it, then with the young guys, they've been there now for a few weeks and hopefully they're going to have a chance to get in," Hargreaves said Friday. "It's kind of like it was a year ago, where when you asked me this question, I kind of wasn't sure. And then Dre Greenlaw came out of nowhere. I'm hoping I get another Dre Greenlaw this year."

Greenlaw, who was a true freshman then, and Brooks Ellis started the final 11 games at linebacker as Arkansas used mostly a 4-2-5 alignment, particularly after Josh Williams suffered a broken leg in Week 5.

"I'm cautiously optimistic, I would say, about where we're going," Hargreaves said.

Receivers coach Michael Smith said he expects senior Keon Hatcher to have plenty of motivation this fall. Hatcher had 13 catches for 198 yards and 2 touchdowns before going down with a broken foot in Week 2 last year.

Hatcher was not among the six players selected for the three preseason all-conference teams at SEC media days, though teammate Drew Morgan made third team with Texas A&M's Ricky Seals-Jones, behind first-teamers Calvin Ridley of Alabama and Christian Kirk of Texas A&M and second-teamers Malachi Dupre of LSU and Fred Ross of Mississippi State.

"That's fine," Smith said. "We don't need all the notoriety. We know what we have in our stable. Keon is definitely going to be motivated, especially coming off a season where he had to sit and watch the corps of receivers we have play the way they did and play well.

"And he's got a different motivation. He wants to go to the NFL. When you have a guy who's that hungry and he's still the leader of our corps, I believe great things are ahead of him."

Bret Bielema said there are players who are deeper on the depth chart are contemplating whether to stay with the Razorbacks or seek a transfer with camp looming.

Kicker Lane Saling opted to leave the program recently, while the departures of receiver Eric Hawkins and defensive back Willie Sykes were announced a couple of weeks ago.

"Lane just kind of came in after spring camp and it wasn't anything other than he just kind of lost a love of the game," Bielema said.

"Right now there's a couple of other guys that are kind of in a holding pattern. To me, that's kind of a good thing, to have guys that haven't gotten in trouble, haven't done anything wrong other than they want to have more playing time and they can't get it. That's a sign that you're building your roster in the right way.

Arkansas coaches were outspoken in the spring about their willingness to use fewer two-tight end sets unless someone emerged to pair with senior Jeremy Sprinkle, the top touchdown scorer (6) among tight ends in the SEC last year.

The remarks reflected on the Hogs' depth at wide receiver, but also on the urgent need for development of redshirt freshmen Will Gragg, Austin Cantrell and Cheyenne O'Grady, who were a strong core of the 2015 signing class.

"We were just being transparent with the media and saying, 'Look, this group has to grow up, and grow up fast,'" tight ends coach Barry Lunney Jr. said Friday.

"We need that group to be accelerated in their urgency, in their learning, in their maturity. ... What we need to do is make sure we're on a steady climb and progression of getting better, and if those guys continue to do that, I feel they're all going to be fine."

Lunney said Jack Kraus, who underwent knee surgery late last year, and Anthony Antwine, who has bounced from tight end to receiver, are both solidly in contention for playing time.

Offensive line coach Kurt Anderson has offered a bold prediction about the development in store for Colton Jackson and Hjalte Froholdt on the left side of the line.

When Anderson was reminded that left guard Sebastian Tretola was a second-team All-American and Denver Kirkland was a strong left tackle last season, Anderson agreed.

"Yup, but I believe in these guys and I believe in their ability," he said. "I know what my capabilities are as a coach and being able to get the most out of those guys."