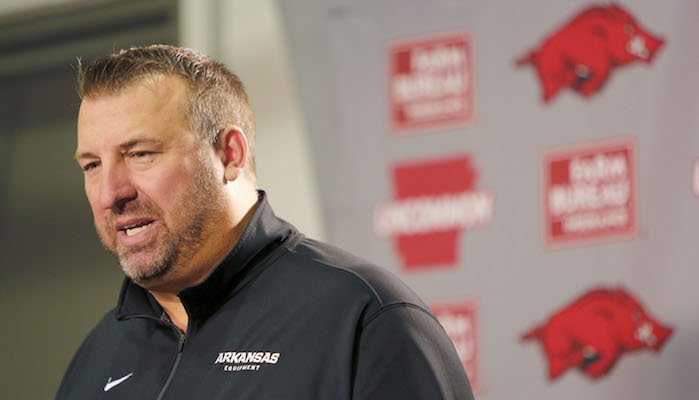 FAYETTEVILLE -- Arkansas and Arkansas State are getting together in Little Rock for some football at War Memorial Stadium.

But the state's two NCAA Football Bowl Subdivision programs aren't playing each other. They're going to be fellow campers.

Arkansas and ASU have agreed to hold a players camp June 5 in War Memorial Stadium, Razorbacks Coach Bret Bielema and Red Wolves Coach Blake Anderson said Thursday, and coaches from every college football program in the state are invited.

"Anybody and everybody that plays football at the college level in Arkansas," Bielema said. "You just need one to host and everybody else can come.

"I think A-State will probably host it actually."

Anderson said the Little Rock camp will cost $30 for each player.

Bielema said that with the NCAA board of directors' decision to rescind a ban on satellite camps -- which means colleges are allowed to conduct them away from campus -- Arkansas is looking to hold camps around the country -- including at Dallas Cowboys AT&T Stadium -- and even go "global" in the Bahamas and possibly Europe.

Arkansas has a long-standing policy of not scheduling other in-state colleges in any sports, but Bielema said he sees no issue with conducting a camp involving ASU.

"I just thought if there's something that we can do to promote the state of Arkansas and promote football and promote Little Rock and War Memorial and the history, why not do this?" Bielema said. "So we'll jump into it with them.

"You're doing all the things that are good for our state. I don't know why you'd limit it."

Bielema, Anderson and Ouachita Baptist Coach Todd Knight are members of the American Football Coaches Association board of trustees, which met in Phoenix earlier this week.

Bielema said he talked with Anderson and Knight about having a camp for Arkansas colleges, and they all agreed it was a good idea.

"We just said, 'Man, why don't we hook up and do this?' " Anderson said. "We'll invite every college in the state and have one camp there, and any kid that thinks he might want to play in the state of Arkansas needs to show up.

"The kids are going to decide where they go anyway. We just want to create an opportunity for as many of them as we possibly can.

"To me, it just makes sense. It's good for the state of Arkansas."

Bielema and Anderson didn't know each other well, but both said they became friends sitting next to each other at the board of trustees meetings.

"In my conversations with Bret, I never got anything from him but cordial," Anderson said. "Nobody has ever agreed for us to play each other, but I don't know how much he has to do with that. Probably not as much as people think. It's kind of been set in stone for a lot of years."

Anderson said he doesn't see a conflict of interest recruiting-wise by having a camp with Bielema.

"If we ever beat them on a kid head-to-head, I'm sure he'll scratch his head a little bit, but that hasn't happened yet," Anderson said. "We're going to keep taking swings at it, but we talk about us, we don't talk about them. And they do the same. They don't really worry about us."

Bielema said he's still working out the details for other camps this summer, but he spoke Wednesday with Cowboys executive vice president Stephen Jones -- a former Razorback -- and Arkansas will hold a camp in AT&T Stadium.

"I think we'll be one of the very few that does a pro stadium exclusively," Bielema said.

Bielema said Arkansas also is looking to be part of camps in Houston, New Orleans, Florida, Michigan, Illinois and Ohio.

"There's a whole dynamic that got opened here that is uncharted waters," Bielema said of SEC teams being part of satellite camps. "We're going on what I call the Hogwild Tour 2016. Just going to go where we need to go. We're setting up agreements right now and we'll see where the cards fall."