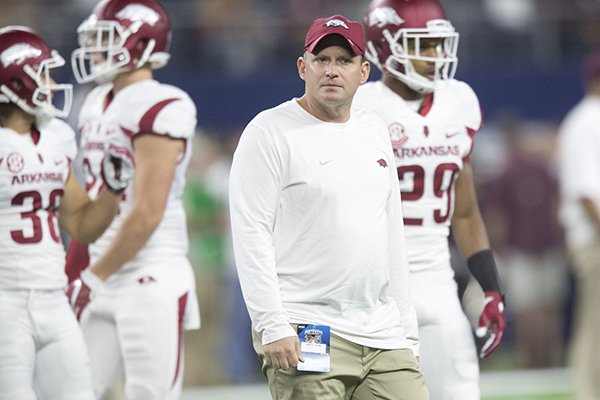 Arkansas defensive coordinator Robb Smith watches warmups prior to a game against Texas A&M on Saturday, Sept. 24, 2016, in Arlington, Texas.

Arkansas is expected to host an impressive list of visitors for the Florida at Reynolds Razorback Stadium in Fayetteville on Saturday, and athlete Kamren Curl is one of them.

“He said he enjoyed watching me and I was very impressive,” Curl said.

Curl, who's being recruited as a safety, is looking forward to Saturday’s visit.

“I just want to see the environment and how everything works,” he said.

He committed to Texas Tech in June, but recently reopened his recruitment.

Curl is aware a former Muskogee defensive lineman went on to play at Arkansas and is currently with the New York Giants. The Hogs haven’t extended an offer, but Curl hopes one comes his way.

“It would mean a lot,” Curl said. “I've always liked Arkansas. They’ve always had a pretty good football team, and one of the guys from my high school went.”