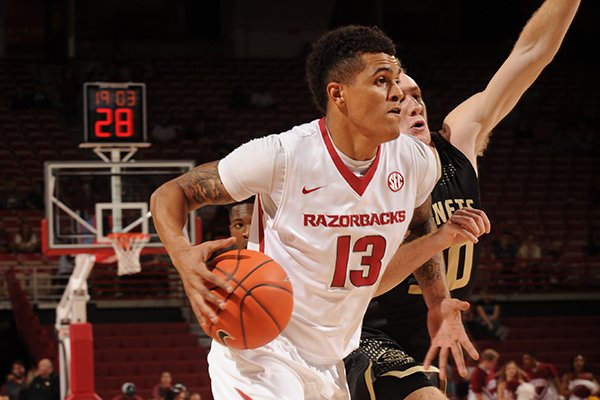 Arkansas' Dustin Thomas (13) drives past Emporia State's Josh Pedersen Friday, Nov. 4, 2016, during the first half of play in Bud Walton Arena in Fayetteville.

Early in the second half, Emporia State failed to get the ball past the foul line in the backcourt on three straight possessions, leading to seven quick Arkansas points in perhaps the most shining example of how the Hornets were completely and utterly outmatched. At one point, Emporia State had 21 turnovers and 18 points as Arkansas led by as much as 53.

The Hornets finished with 30 turnovers. Arkansas had 16 steals and nine blocks, including six by senior Moses Kingsley in just 21 minutes. Kingsley had a LeBron-esque chasedown block on a fast break in the first half, lingering behind to give the Emporia State player the impression he had a clear lane to the rim only to accelerate and swat the ball off the backboard. Anton Beard, Arkansas’ shortest scholarship player, even blocked a shot with his armpit.

The blocks and steals allowed the Hogs to leak out on the break and score 23 transition points and 42 off turnovers, with Kingsley in particular serving as the recipient of several outlet passes leading to easy dunks.

The opponent made it tough to take much away from the game about the Hogs’ defense, but Dustin Thomas looks like he may be a playmaker on the second row of the 2-2-1 press thanks to his length and leaping ability. Mike Anderson tested out a matchup zone in the halfcourt for a brief period in the first half, which led to a few tipped basketballs. The Hogs’ length should allow them to pester teams when they trap on the wings in the halfcourt.

Emporia State only shot 31 percent and looked uncomfortable most of the game. Arkansas had 28 deflections at halftime, well on its way to its goal of 40 for the game. The Hornets scored a horrendous 51.8 points per 100 possessions, an unthinkably bad number that stemmed from the talent gap, it being their first game and Arkansas locking in defensively after Anderson spent the week harping on it.

Obviously Barford can’t come close to matching the skill level and athleticism of Oklahoma City’s all-star point guard, but he plays similarly at times in that he routinely generates transition looks out of nothing by racing the ball up the court before the opposing defense is set.

He had a very Westbrook-like take early in the second half, jetting into the frontcourt after a made Emporia State basket, barreling toward the rim and drawing a foul as he sacrificed his body to get the contact while moving full speed.

Anderson said after the game that he got onto Barford for deferring too much in the first half. He’s an intriguing piece, because, also like Westbrook, he can use the mayhem he causes with his mad dashes to set teammates up. He had a team-high five assists in just 22 minutes and has shown flashes of creative passing in each of Arkansas’ exhibitions and its Red-White game.

Again: He isn’t Russell Westbrook or close to it. But he’s showed signs of playing the same way when he’s aggressive.

Arkansas is always going to be a primarily motion-based offense under Anderson, but the Hogs have had a lot of success running the spread pick-and-roll sparingly in the first two exhibition games, in large part because they have a pair of bigs with different skill sets that flourish in the PNR.

Kingsley affects the geometry of the floor every time he runs a PNR simply because of his threat as a roller. Defenses have to help and give a bump or he’s getting a layup or dunk. That in turn opens up shooters and gives the ballhandler a number of options.

Thomas’ ability as a passer makes him a good option in the PNR, too. Friday, he caught a pass on a short roll near the foul line, which caused a help defender to take a few steps toward the paint. Without hesitation, Thomas whipped a pass to the defender’s man, a wide-open Daryl Macon, who drained a 3-pointer on the wing. As a whole, Arkansas’ passing so far has been encouraging. The team has a

It’ll be interesting to see if Arkansas runs the pick-and-roll more frequently at all given Kingsley and Thomas’ ability to affect defenses.

Anderson said Adrio Bailey’s effort in the first exhibition game would lead to him getting more minutes Friday. He did, playing 13 minutes after scoring five points and grabbing five boards in just five minutes a week earlier. He impressed in the extra time, finishing with five points and eight rebounds, providing activity and energy.

He followed up a Beard miss with an authoritative putback dunk in traffic late in the game, showing off the athletic ability that lends his game to comparisons of a freshman Michael Qualls. If he earns a way into the rotation, he will have a great chance to land on SportsCenter. His combination of athletic ability and aggressiveness make him likely the second-best rim protector on the team. He was called for an iffy foul on what would have been a block and altered a few other shots around the rim.

It’s hard to know how Anderson will handle the frontcourt rotation. Kingsley and Thomas will get big minutes, while Thompson seems to be the third big. JUCO transfer Arlando Cook has been the fourth so far, with Bailey and Brachen Hazen getting some run against outmanned exhibition foes. All three may play against nonconference foes, but it’s more likely that only one will get meaningful minutes in meaningful games.

In that light, these early season auditions are potentially huge opportunities for a player like Bailey. That trio of bigs all have different ability they bring to the table, but Bailey’s motor and athletic ability make him a potentially impact energy big off the bench if he can earn Anderson’s trust.

Anderson used the game to tinker with different lineups and try out new looks. Without C.J. Jones (sprained knee), one of those looks was a three-big bench lineup.

The group, which featured Anton Beard and Manny Watkins in the backcourt with a combination of Bailey, Cook, Hazen and Thompson in the frontcourt, outscored Emporia State 16-11 over the span of 7:41, faring decently well. But the lineup lacked a lot of scoring punch and spacing was a bit cramped as a result of having four non-shooters and Beard on the court.

In that light, the need for Jones’ role as a floor spacer and a scorer became more evident. Even with Jones, Anderson may be better suited staggering the rotation so that Barford or Macon is on the court to provide ballhandling and scoring. Without him, it seems absolutely necessary. Will be interesting to monitor going forward, especially if Jones misses up to two weeks, like Anderson said he may.

— Hannahs has shown a lot of off-the-bounce ability so far. He was underrated in that regard last year, but has looked even more comfortable putting the ball on the floor.

— Manny Watkins wound up being the lead ballhandler several times in big lineups featuring just him and Beard as the only guards. For the second straight game, he did a nice job pushing the pace and making the right play in semi-transition. He’s not a player who will run the offense, but his improvement as a secondary ballhandler has been encouraging.

— Arkansas made 5 of 14 3-pointers Friday after making just 1 of 18 in the first exhibition game. Macon hit just 3 of 4 from 3-point range, Hannahs 1 of 5 and Beard 1 of 2. Dustin Thomas, Brachen Hazen and Manny Watkins each missed their only attempt. Without Jones, arguably the third-best shooter on the team, in the lineup, the Hogs didn’t get many 3s up. The 14 attempts were three less than they averaged last year, which was the least an Anderson team had ever attempted. Breaking Emporia State down off the dribble was a breeze, so the Hogs didn’t need to shoot 3s, but averaging 16 attempts through two games is interesting, albeit a very small sample size.

— Beard has played well in both games. He hasn’t forced the issue and has set up teammates well, charting seven assists to two turnovers.