Hogs have had the key to stopping Leonard Fournette 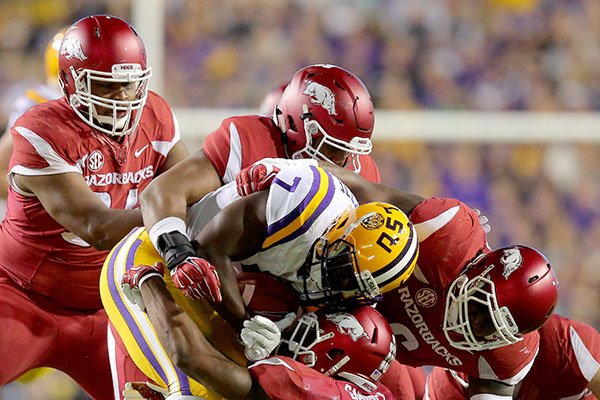 FAYETTEVILLE — Arkansas is coming off its best defensive performance of the season.

Now the Razorbacks face a team they have shut down two straight years.

LSU has combined to score 14 points and total 463 yards of offense in the past two years against Arkansas. The Razorbacks have won both games by 17 points.

Arkansas has held LSU running back Leonard Fournette in-check both times. Fournette rushed 19 times for 91 yards last season and 5 times for 9 yards in an injury-shortened game the year before.

The Razorbacks' defensive strategy last season was to force Fournette wide and use the sideline as a 12th defender. The key is to not let the 6-foot-1, 236-pound runner get momentum straight ahead.

"We have played them physical and established the line of scrimmage," Arkansas defensive lineman Taiwan Johnson said. "We've stopped Fournette from getting to his points and stopped him from getting downhill fast. I think if we can do that again, we'll have success again."

Arkansas will try to force Fournette outside the tackle boxes again this year. It may seem to be a strange strategy given the Razorbacks' inability to tackle along the edges in games against Texas A&M, Alabama and Auburn.

But Johnson said there is a difference between a running back running outside out of the I-formation and a receiver doing it on a jet sweep or a push pass.

"I think when you can get running backs going side-to-side, it slows down what the offense is trying to do," Johnson said. "It can really frustrate them and can get in the running back's head.

The Tigers run an offense comparable to the pro-style one run by Florida last week. The Razorbacks held the Gators to 12 rushing yards on 14 carries.

"We improved our gaps," linebacker Brooks Ellis said. "We made sure our gaps were filled and they had nowhere to go. If we did that against Auburn, we probably would have done a lot better."

Like Florida, LSU won't run as many sweeps and will huddle. The Tigers also lack a running threat at quarterback and haven't shown as many three-receiver formation sets as they did last year.