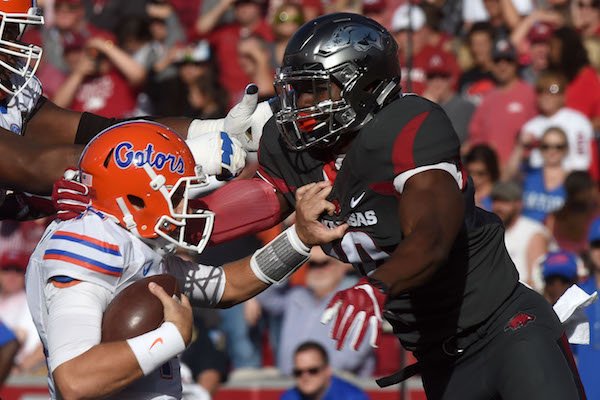 FAYETTEVILLE — Randy Ramsey became a starter at linebacker for Arkansas’ defense thanks to matchups the last two weeks.

The 6-foot-4, 228-pound sophomore transitioned from a situational, pass-rushing defensive end to the starting strongside linebacker as a result of Florida and LSU’s offenses allowing the Razorbacks to use their base 4-3 look for the first time this season. He provided a spark at times in his new role for a defense that needs his playmaking and speed.

The Florida and LSU schemes weren’t common for an Arkansas team that has faced predominantly spread offenses. This week’s matchup at Mississippi State is a return to that norm against the Bulldogs spread scheme, led by sophomore quarterback Nick Fitzgerald.

So what is Ramsey’s role this week?

“There may be a place for him,” linebackers coach Vernon Hargreaves said. “Certainly in passing situations coming off the edge, I think that’s certainly a place we can use him. Then on regular downs, we’ll see where it goes and the direction we plan on going in.”

An understandably coy response to a question that probably won't be answered until Saturday.

Ramsey wasn’t perfect against Florida and LSU, missing assignments. He wasn’t alone in that regard, either.

Even while adjusting to being moved back to linebacker, the position he was recruited to play, he flashed his skills, totaling six tackles, three quarterback hurries, 1.5 tackles-for-loss, a sack and a forced fumble the last two weeks.

The coaching staff still divvies up his practice reps, the result of his versatility and use as a linebacker-end hybrid. Defensive coordinator Robb Smith calls him the “joker” because he can fill a number of roles.

He may be asked to do that again Saturday against a Mississippi State offense that features Fitzgerald’s arm and legs. He has thrown for 1,850 yards and run for 854, more than twice as many as any running back on the roster.

The Hogs will have to be ready to stop the quarterback run game. Mississippi State has a somewhat unique approach, but Arkansas has generally struggled against dual-threat quarterbacks this year, part of a nation-worst run defense that allows 6.34 yards per carry.

The linebackers will need to play well, better than they did against LSU, when the Tigers ran for 390 yards on 7.6 yards a pop. Inexperience, aside from senior middle linebacker Brooks Ellis, is evident.

The coaching staff likely has a good idea of which way it will lean with what look the defense is in. The formations Mississippi State lines up in will have an impact. But keeping an eye on how the Hogs use their linebacker personnel will be worthwhile.

Ellis is entrenched at the Mike. Ramsey has assumed the role at Sam when needed. Dwayne Eugene has started the last four games at the Will, but true freshman De’Jon ‘Scoota’ Harris was active in the second half against LSU when he got on the field after the Tigers had taken control. Harris seems the likely candidate to continue to play the lion’s share of the snaps, but he and Harris are listed as co-starters heading into Starkville.

“It was a good opportunity to get Scoota in the game and get him more experience and let him play a little bit, because there’s nothing like being in a ballgame,” Hargreaves said of the LSU game.

Both players are still going through the growing pains of being inexperienced in the SEC. Eugene had a team-high 10 tackles against the Tigers. Harris finished with seven tackles, 1.5 tackles-for-loss and a sack, arguably the most encouraging performance to date for a freshman the staff is high on.

“For the little amount of time in there, he actually did a pretty good job,” Hargreaves said. “Just trying to build, man. Hopefully make him feel a little bit better about where he is and hopefully he’ll start to provide a little bit more depth for us.”

Arkansas’ run defense has largely been gashed. The Hogs have struggled against running quarterbacks. In that light, the Mississippi State matchup appears to be yet another stiff test for a struggling unit.

Coach Bret Bielema mentioned simplifying the calls after LSU beat the Razorbacks inside. The Hogs could use a number of different personnel groupings against the Bulldogs. What buttons the coaches push in the wake of another disheartening defeat will be interesting to watch as the Razorbacks search for their first win over Mississippi State in four years.