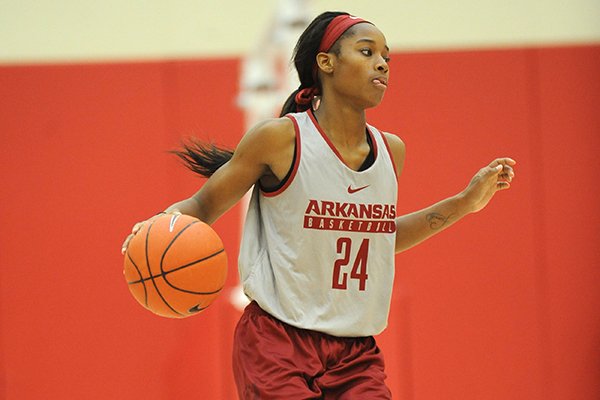 Arkansas guard Jordan Danberry drives with the ball Wednesday, Oct. 12, 2016, in the basketball practice facility on the university campus in Fayetteville.

FAYETTEVILLE — Arkansas will travel to Tulsa on Wednesday with two fewer players on the roster.

Both players were among six who knelt for the national anthem prior to an exhibition game earlier this month, but Dykes said that incident had nothing to do with either's decision to stop playing basketball for the Razorbacks.

"We don't even talk about that anymore," Dykes said when asked about the anthem incident. "...It had nothing to do with that at all."

Danberry was averaging 4.7 points and 3.8 rebounds per game for the Razorbacks (6-0). The Conway native was a five-star recruit out of high school, according to ESPN, and was the state's Gatorade Player of the Year as a junior in 2014.

As a freshman, Danberry played in all 30 games and started 13 times. She led the team with 70 assists and averaged 6.7 points per game last season.

Danberry had not started any of the six games this season and was averaging 12 minutes per game. Dykes did not give a reason for Danberry's departure, but said he did not think that playing time was a factor.

"I met with her (Tuesday) and told her how much I appreciated her saying yes to be a Razorback to start with," Dykes said. "She was one of the first young ladies I recruited. I told her I would help her going forward in any way I could at all because I want her to have success as a person wherever she goes. I want her to have some success beyond basketball."

Dykes said he will allow Danberry to transfer anywhere she wants, including to an SEC program.

"If she wants to play in the SEC or one of the nonconference teams we have scheduled next year, then we have to figure out how to guard her when that happens, I guess," Dykes said.

Without Danberry on the roster, Dykes said he expects freshman Aaliyah Wilson and junior Devin Cosper to earn more playing time off the bench.

The Razorbacks have also received a boost from freshman guard Jailyn Mason, who was also one of the six players to kneel for the anthem on Nov. 3. Mason has started all six games and earned the SEC freshman of the week award Tuesday after scoring 18 points combined in wins over Memphis and Navy in Reno, Nev., last week.

"If we were going to lose someone, it would probably be (better) at the guard spot more than on the inside," Dykes said.

Dykes indicated that he was not permitted to provide any details about Smith's medical situation. Smith, a Plano, Texas, native who transferred last year from Arkansas Baptist College, has not played this season, but Dykes said she is on track to graduate in the spring.