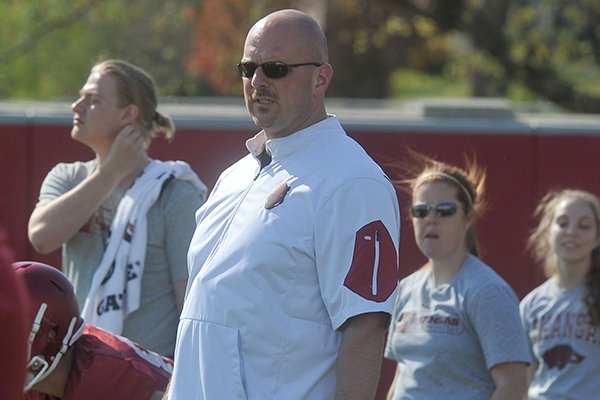 Discuss this story and interact with our recruiting analysts at the recruiting insider board.

"I've been talking to everybody on the coaching staff lately," Mbanasor said. "They've been recruiting me hard and trying to get me up there for an official. They're really a great staff."

ESPN rates Mbanasor a 3-star prospect and the No. 50 defensive tackle in the nation. He said he talks to Segrest most often.

"The relationship is coming along well," Mbanasor said. "He sees me as a D-end."

He also said he was impressed with the Hogs' 41-38, double-overtime victory over TCU on Saturday.

"I thought the defense played great especially the D-line. ... I was impressed with how much depth they had," Mbanasor said. "I saw [McTelvin] 'Sosa' Agim make some plays, and I thought that was really neat."

Seeing Agim, a defensive lineman from Hope, playing as a freshman was noticed by Mbanasor.

"Yeah, for sure it plays a lot into me deciding to stay with Oklahoma State or go somewhere else," he said. "I'm really just looking at playing time."

Mbanasor, who bench presses 330 pounds and squats 485 pounds, said what could sway him to Fayetteville.

"I think I just need to go up there and see a great environment and hopefully that will change my mind," he said.

Mbanasor's brother, P.J., was a heavily recruited cornerback last year that was pursued by the Hogs and is now a freshman at Oklahoma. After seeing his brother's recruitment, Nelson Mbanasor said he learned to explore all of his options.

"He took only one official [visit], I believe, and it was to Oklahoma," Mbanasor said. "I feel like he closed the door on other schools when he committed. He never gave other schools a chance like Arkansas and others, and I feel like that's something I need to do."

The SEC has won of 8 of the past 10 national championships and has lead the nation with the most selections in the NFL Draft for 10 consecutive years, facts not lost on Mbanasor.

Sept. 1 was the first day college coaches could communicate with junior prospects via direct message on Twitter or Facebook. Arkansas Coach Bret Bielema made sure to contact cornerback Ken Montgomery.

"He just told me I'm really big priority for Arkansas and they will love to have me there for a game," Montgomery said.

Montgomery, 6-2, 160, 4.58, of Tampa (Fla.) Hillsborough, is closing in on 20 scholarship offers, including ones from Arkansas, Southern Cal, Louisville, Nebraska, North Carolina State, Tennessee and Missouri.

Bielema reaching out has him hoping to visit Hogs for a game this season.

"Well, if the head coach is getting in contact with me, then he must mean business," Montgomery said.

ESPN rates Montgomery the No. 11 cornerback and No. 64 overall prospect in the nation. He recorded 23 tackles, 2 interceptions and a pass deflection as a sophomore. He said his instincts help him excel on the field.

"I know what's going on before the play even starts," he said.

He said Bielema is looking forward to having a relationship with him.

"He really wants to get meet my family and start a bond," Montgomery said.

Bielema also let him know he has ties to the Tampa area.

"He also told me his wife is from Tampa," Montgomery said.