Tyson Gay to give bobsledding, Winter Olympics a try 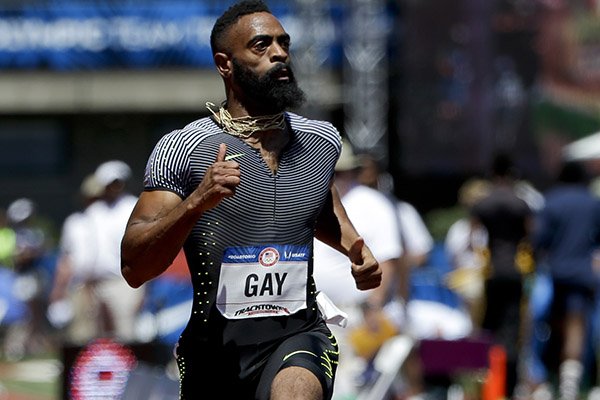 Olympic sprinter Tyson Gay is entered in this week's USA Bobsled National Push Championships, making him the latest track star to give sledding a try.

The push championships start Wednesday in Calgary, Alberta and are the first step toward a potential spot on this season's national team.

Gay has competed in each of the last three Summer Olympics. He was part of a team that won a silver medal in the 4x100-meter relay at the London Games in 2012, though that medal was ultimately stripped after Gay tested positive for steroids at the U.S. championships in 2013 and served a one-year suspension. He also had all results annulled going back to July 15, 2012, a period that included that year's Olympic competition.

One of the runners that lost his London silver medal because of Gay's positive test was Ryan Bailey, another bobsled rookie who is scheduled to compete in the push championships.

"I'm still not over it," Bailey said last month, referring to having his medal taken away.

And now it stands to reason that they could be teammates once again.

Bailey has impressed coaches so far, especially after winning the preliminary push championships on dry land in Lake Placid, New York last month. This competition takes place on ice and Gay has been practicing sled-pushing for only a few days, according to USA Bobsled and Skeleton.

But Gay's speed figures to give him a chance to make a huge splash. His all-time best in the 100 meters is 9.69 seconds, a time bettered only by three-time reigning Olympic 100 champion and world-record-holder Usain Bolt of Jamaica.

But his 2008 Olympics were troubled by a bad hamstring that hurt his chances of medaling individually, and a bad handoff in the 4x100 knocked the U.S. out of the mix in that event. His 2012 Olympics were erased by the positive test, and what could have been a bronze medal in the relay at Rio last month was lost when the Americans were found to have made a bad handoff and were disqualified again.

The Rio relay debacle was the ninth time since 1995 that the U.S. men were disqualified or failed to get the baton around at the Olympics or world championships. And that doesn't even include the medal that was lost in London after Gay's doping ban.

"It has to be the worst luck for this country ever," Gay said in Rio. "It's always something weird, stupid, simple, mistakes that always cost us and I don't understand."

He might have a shot at joining a different sort of four-man team now, one that runs together for a few seconds and then hops into a sled for a thrill ride down an icy mountainside chute.

Gay follows a long line of speedsters who will try to push a sled, a list that includes Lauryn Williams — a medalist in both the summer and winter games — as well as longtime U.S. hurdles star Lolo Jones, Rio Games double gold medalist Tianna Bartoletta and former men's competitors Edwin Moses, Willie Davenport and Renaldo Nehemiah.

Jones, a 2014 Sochi Olympian, will be in the women's push competition, as will 2014 Olympic bronze medalist Aja Evans.

In all, 56 competitors are entered in the championships, which start with solo events Wednesday and combination events Friday and Saturday. Drivers will analyze results before selecting their team for national team trials, which begin in Lake Placid next month.