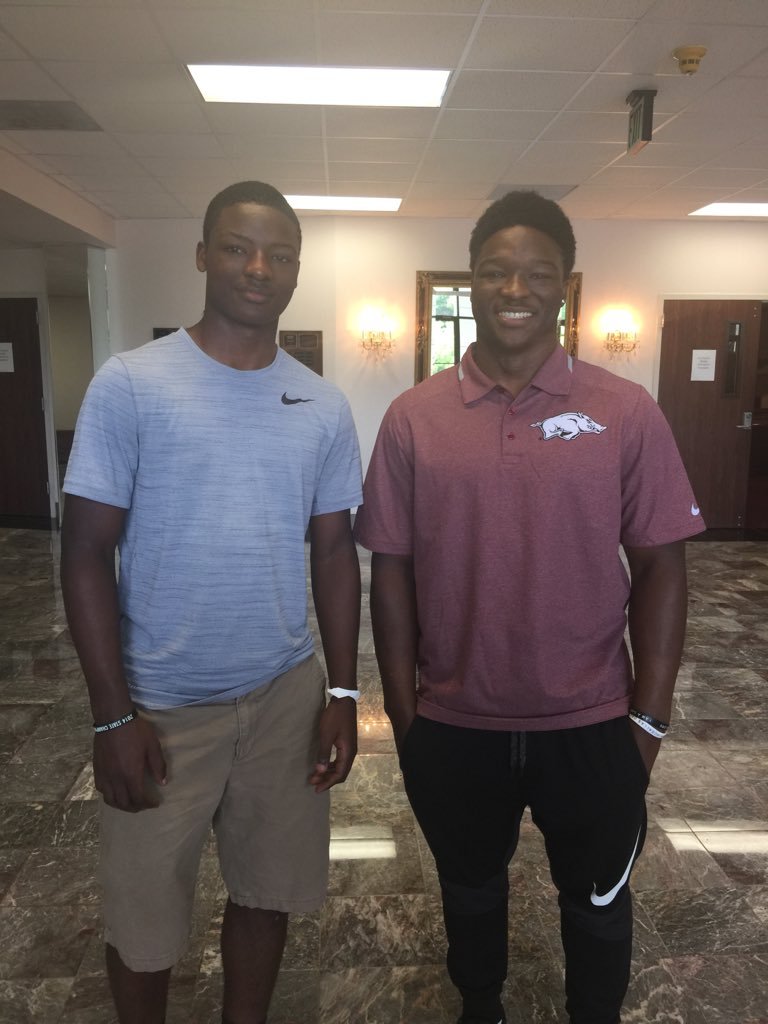 DALLAS — Highly recruited safety Brian Williams has been a regular at Arkansas’ games this season, and the trend likely won’t end anytime soon.

The younger brother of Hog running back Rawleigh Williams III will be in the stands for the Texas A&M game at AT&T Stadium in Arlington on Saturday along with about 14 other family members.

Williams, 6-1, 190 pounds of Dallas Bishop Dunne, may have the most scholarship offers of any prospect in the 2019 class, including Arkansas, LSU, Southern Cal, UCLA, Colorado, Nebraska, TCU, Texas A&M, Baylor, Auburn, Iowa, Missouri and others.

Following his brother will limit his visits to other schools.

“I should be at all the Arkansas games, so there probably won’t be any real time any visits, or I might go to TCU’s game during Arkansas’ bye week,” Williams said.

He attended the Razorbacks’ game against Texas State as a recruit along with teammate and highly regarded sophomore receiver Marquez Beason.

“It was another enjoyable game,” Williams said. “My brother played very well with 121 yards and two touchdowns, so I was happy for him and the way they were able to beat Texas State the way they were expected to beat them; it was a great win.”

Because of a game of his own, the younger Williams was watching last year’s Auburn game at home when his brother suffered the frightening neck injury.

“I’m happy for him, and I’m just happy he’s able to play again and do what he loves,” he said.

Williams has recorded 11 tackles, a tackle for loss, 3 interceptions, one for a score along with 2 pass breakups in three games.

“His knowledge allows him to play so fast, because he’s so smart,” Johnson said. “He understands what offenses are trying to do to him. What separates him from a lot of guys is he’s so intelligent. He knows the play before it even develops. When you have a kid that athletic and knows the play because he studies tape, he’s always going to be successful.”

Brian and Rawleigh have a strong bond, but like all siblings, they had their typical differences during their youth.

“My brother and I always got into brotherly fights , but it was always love at the end,” said a laughing Brian Williams. “We definitely fought over the smallest things like TV remote or playing a game or where we get to sleep. It was always fun.”

As they grew older, Rawleigh put his foot down.

“Especially as I started growing and kind of got taller than him,” Brian Williams said. “He definitely tried to put me back into my place and let me know who was the oldest.”