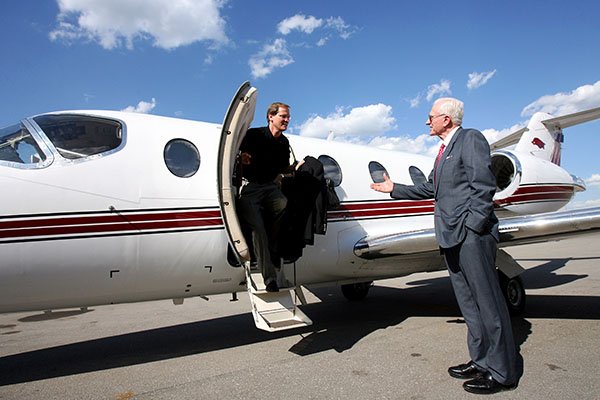 Arkansas athletics director Frank Broyles greets Dana Altman as he steps off a university plane on Tuesday, April 2, 2007, at Drake Field in Fayetteville. Altman would be introduced as the Razorbacks' head basketball coach later that day, but quit 24 hours later to return to his old job at Creighton.

FAYETTEVILLE -- Dana Altman concluded his opening statement at a news conference introducing him as the Arkansas Razorbacks' basketball coach with a request.

"I'm 48 years old," Altman said standing at a podium on a stage in Walton Arena. "And with your permission, I'd like to finish my career here at the University of Arkansas."

Dana Altman is the third college basketball coach in the past five seasons to take a team to the Final Four after accepting a job and backing out to return to his previous position.

Altman, who returned to Creighton in April 2007 after taking the Arkansas Razorbacks job, will coach Oregon against North Carolina in a Final Four matchup tonight.

Gregg Marshall, who returned to Winthrop after being hired at College of Charleston in June 2006, led Wichita State to the 2013 Final Four.

After Billy Donovan led Florida to back-to-back national championships in 2006 and 2007, he was hired as coach of the NBA’s Orlando Magic. A week later he returned to Florida, which he led to the 2014 Final Four.

A rundown of prominent coaches who changed their minds after accepting jobs:

YEAR COACH HIRED BY RETURNED TO

NOTE Cremins was hired as College of Charleston’s coach after Marshall backed out of the job.

Razorbacks fans may laugh, cry or simply sigh when reminded of Altman's request.

Altman is now 58 and tonight -- on the weekend marking the 10-year anniversary of accepting the University of Arkansas, Fayetteville job -- he'll coach Oregon in the Final Four against North Carolina.

"I don't wish Dana any ill will," said Jim Counce, a heart surgeon who was an Arkansas player and assistant coach. "But I won't be pulling for Oregon in the Final Four."

Altman never coached a game for the Razorbacks.

A day after being announced as Arkansas' coach on April 2, 2007, Altman was on a private plane flying back to Omaha, Neb., to remain the coach at Creighton.

The Eagle Scout for Troop 101 in Wilber, Neb., was on the job at Arkansas for barely 24 hours, arriving one afternoon and leaving the next.

Arkansas fans may have wondered whatever happened to Scout's honor?

"Everything happened so fast," said Woody Bassett, a lifelong Fayetteville resident and attorney who earned his undergraduate and law degrees from the UA. "It was just a very strange moment in Arkansas basketball history."

Altman conducted an impromptu farewell news conference in the Walton Arena parking lot. He apologized to Arkansas administrators for his about-face and said it was "totally a family decision" to return to Creighton.

"I poured my heart and soul into Creighton University for 13 years, and in the final analysis, I just can't leave," Altman said. "I truly believe when I made this decision that Arkansas is a special place.

"I had other opportunities before, and I always turned them down. I got a little bit further this time, and I do apologize for that. ... I just wish I had come to that decision earlier."

"I was flipping through the channels, just to see what was on," Townes said. "I thought it was a joke."

As news spread of Altman's reversal, reports surfaced that he was concerned about whether some players would be academically eligible and that some had flunked drug tests.

A day after Altman's reversal, Arkansas announced two players had tested positive for marijuana use and one player was on academic probation. The players weren't identified because of federal privacy laws, according to a news release.

No Razorbacks were ineligible the next season.

John White, Arkansas' chancellor at the time, said that when Altman learned of the drug test results and academic suspension, he admitted he didn't encounter many similar issues at Creighton but that he wasn't uncomfortable taking the Razorbacks job under those circumstances.

Altman already was having doubts about leaving Creighton, Trainor said, before he saw reports of the Arkansas players' academic standing and drug tests April 3.

Altman called Creighton Athletic Director Bruce Rasmussen the night before and received an assurance he could have his old job back, Trainor said UA officials learned.

"I don't really look at him leaving Arkansas as a rejection of our program," Trainor said. "I look at it as a decision he made that he wasn't ready to leave Creighton."

Altman, who has an overall career record of 597-312 in 28 seasons at Marshall, Kansas State, Creighton and Oregon, was in Atlanta at the 2007 Final Four when he accepted the Arkansas job late on a Sunday night.

The next morning he flew to Omaha to see his family -- including wife, Reva, and their four children -- and meet with his Creighton players. Then he flew to Fayetteville for a news conference.

"By the time he arrived in Fayetteville, he'd already had a very long and emotional day," Trainor said. "He appeared to be emotionally drained."

Trainor said that shortly before White, Broyles and Altman were to go onto the Walton Arena court to address media members and fans, Altman asked for a moment by himself as they were in the training room.

"He went back in the offices there and didn't come back for quite some time," Trainor said. "As it's happening, you attribute it to nerves and maybe some fatigue, but I think all of those emotions played into his ultimate decision to return to Creighton."

When Broyles handed Altman a Razorbacks cap at the news conference, Altman put it aside instead of on his head. Broyles led the crowd in a Hog call and Altman joined in halfheartedly.

"I'm not sure my friends in Omaha would like to see me do that," Altman said.

Altman's subdued reaction to being named Arkansas' coach made more sense the next day.

When White talked to Altman and learned he was on the verge of leaving Arkansas, they met for about two hours. White wasn't able to change his mind.

At White's request, Counce came to Walton Arena to talk with Altman before he returned to Creighton, which at the time was in the Missouri Valley Conference.

"I think a lot of it was the enormity of the situation that he faced," Counce said. "Moving from a mid-major program he'd built into a winner to a high-profile SEC program where expectations were going to be very high, it suddenly dawned on him that maybe he was biting off more than he was willing to chew."

Broyles, in Augusta, Ga., attending The Masters golf tournament as he did on an annual basis, talked with Altman on the phone but couldn't persuade him to stay.

Trainor spent much of the day with Altman.

"In the end, I think some Creighton fans were restless and you heard more about the backlash of Arkansas," said Tom Shatel, a columnist at the Omaha World-Herald since 1991. "Whenever they didn't make the NCAAs or lost a big Valley game, I'd hear someone say, 'Well, he didn't want to be here.'

"But that was the minority opinion. When he left, he was still popular. But it was no surprise. I think most fans thought he would eventually leave again, and go find a power conference where he could make a run at the Final Four."

Could Altman have made a Final Four run with Arkansas?

"I think he would have been successful at Arkansas, but you can't say he would have taken the team to the Final Four," said Pat Bradley, a former Razorbacks All-SEC guard. "He might have had the same results here he's had at Oregon, but who knows?

"Every situation is unique. What a guy did at one place doesn't necessarily mean he could do it at another place."

Mike Anderson has a 128-74 record in six seasons as the Arkansas coach, including 26-10 this season with the Razorbacks' second NCAA Tournament appearance in three seasons.

Before Oregon hired Altman after the 2009-2010 season, Anderson was at Missouri and among the coaches who turned down the Ducks' job.

Anderson coached Alabama-Birmingham and Missouri to a combined six NCAA Tournament appearances in nine seasons before returning to Arkansas.

"You look at Coach Anderson, and he was on the staff so long with the Hogs, but his experiences at UAB and Missouri prepared him for taking the Arkansas job," Bradley said. "There were a lot of challenges when he came back, but he was ready for it because of what he'd been through at his other jobs."

Counce said when Altman made his quick exit from Arkansas, it created a poor perception nationally about the program.

"Mike Anderson has proven Arkansas is still a great job," Counce said. "I think Mike is the absolute best coach for our program. He's done an amazing job, particularly this year.

"I think he's going to take us back to the years where we can consistently go deep in the NCAA Tournament."

Bassett said Anderson is popular with Arkansas fans because of his commitment.

"We all know Mike loves Arkansas, and this is where he wants to be," Bassett said. "He's all in.

"No one knows what would have happened if Dana Altman had stayed, but what we do know is Mike's here and he has the program going in the right direction."

John Pelphrey was hired from South Alabama to be the Arkansas coach after Altman. Pelphrey's first Arkansas team went 23-12 and played in the NCAA Tournament, but the Razorbacks were 46-47 the next three seasons, which resulted in his firing.

"Now we have one of the best coaches in the country in Mike Anderson," Trainor said. "While it was a rocky road, we ended up with the right coach.

"If that's what we had to go through to get to where we are, I'm fine with that."

Trainor drove Altman to Drake Field when he flew back to Omaha. They were in the SUV that was going to be Altman's courtesy vehicle.

"Coach Altman was a very quiet individual anyway," Trainor said. "I know he felt bad about the way things had transpired.

"He didn't intend to take the job and then back out. It was an awkward situation."

Trainor said Altman was gracious in asking him to thank everyone at Arkansas for the opportunity -- however brief -- to be the Razorbacks' coach.

"We felt he was going to have a very successful tenure at Arkansas," Trainor said. "But if his heart wasn't in it and this wasn't where he wanted to be, then it wouldn't have been a good fit."