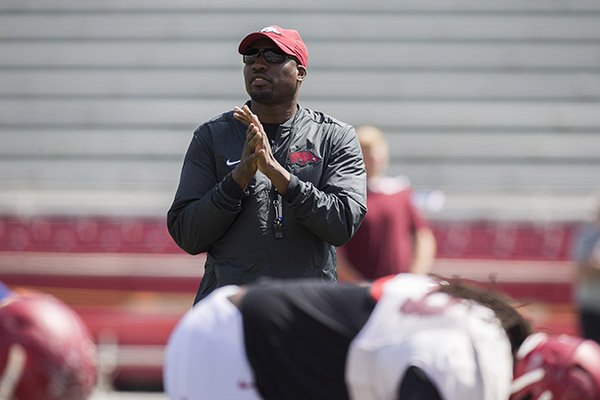 Gooden said he appreciated that Rhoads and Scott were the first coaches to see him during the evaluation period.

"Going into the season Arkansas was on my wish list, and Monday, the first day of evaluation period, they came by," Gooden said. "They were the first school to come by to see me at practice."

Gooden traded direct messages with Arkansas Coach Bret Bielema on Wednesday and said he plans to visit the Hogs for the spring game on April 29.

"He said the staff loves my film and wants me to be a part of the program," Gooden said of Bielema.

Gooden said he respects Scott, who joined Bielema's staff on Feb. 7 after spending two seasons with the New York Jets as a defensive quality control coach.

"Coach Scott coming from the league, he's told me about my game," Gooden said. "That was huge especially coming from Arkansas."

Gooden was a 4-star prospect out of Haywood High School in Brownsville, Tenn., and committed to Mississippi State for the 2016 class, but had to make his way to junior college. His said the Bulldogs don't have an inside track with him and he is "pretty open."

One thing Gooden said he feels strongly about is spending time with kids and mentoring them.

"Growing up, I always looked up to a local athlete," he said. "So once I got older, a lot of kids started coming up to me. I stopped going to day care when I was 13. I was like the oldest kid there, and I use to take care of the kids."

Gooden said he makes it a habit of staying in touch with youth in his hometown.

Gooden, from western Tennessee, said he is familiar with Hogs basketball guard Jaylen Barford, who's from Jackson, Tenn.

"He told me Fayetteville is a great place and Arkansas is a good program and they'll take care of you," Gooden said. "It was good catching up with him and seeing his success translate from the Juco level."