Will Thursday's game be the Hogs' last Little Rock hurrah? 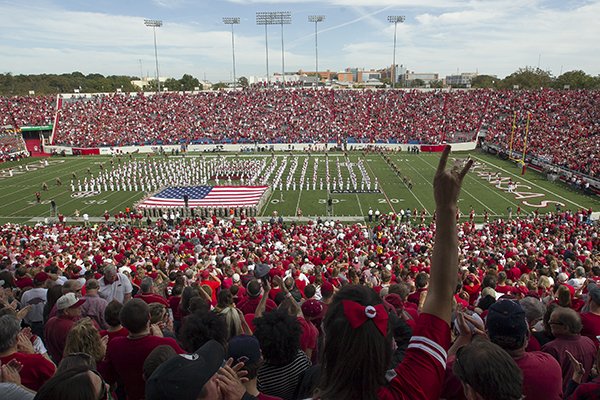 Arkansas fans wait for the kickoff of a game against Georgia on Saturday, Oct. 18, 2014, at War Memorial Stadium in Little Rock.

There seems to be a multitude of questions surrounding the Arkansas Razorbacks' season-opening game Thursday night at Little Rock's War Memorial Stadium against Florida A&M.

How bad will the traffic be?

How many fans of the University of Arkansas-Fayetteville will be there?

Will this be the final date between the Razorbacks and War Memorial Stadium, possibly ending a long and storied history that helped make the Hogs the state's team?

Yes, there is a year left on the contract and it calls for a game next season against an SEC opponent, which if it happens would most likely be against Vanderbilt.

But at this point, it seems a possibility that perhaps the UA athletic department will reach into its deep pockets and just offer to buy the game out for $350,000 to $500,000.

The UA nets about $1 million more for a game in Fayetteville than Little Rock.

It would be a sad sports historical note and might sever more connections between UA and southern, eastern and central Arkansas.

Most fans in these parts seem weary of opponents like the Rattlers, who opened their season Saturday on ESPNU with a 29-7 victory over Texas Southern in Tallahassee, Fla.

Times have changed, and it is a sweeping change from coast to coast.

It seems the No. 1 priority for athletic departments is to raise money, more than ever. Not picking on the UA, but that is the reason for the most recent Reynolds Razorback Stadium expansion, to add expensive suites.

Admittedly, it will be an aesthetic upgrade to the stadium, too.

Not long after the NCAA, college athletics' governing body, changed its leadership from former athletic directors to school presidents, the schools themselves moved away from old coaches like Frank Broyles and Vince Dooley and went with businessmen who had a sports background.

To be successful, these new athletic directors must justify their salaries -- and that of a few of their head coaches -- by raking in as much long green as possible, and one of those ways, the latest, is to play a game off campus.

Not a FAMU in Little Rock, but what Alabama and LSU, to name just a few, do.

These are the type of games networks pay big bucks to televise, but the added advantage, and perhaps the No. 1 reason Nick Saban has made this a habit in recent years, is recruiting exposure.

Georgia, and, especially Texas, are states with an abundance of talented football players. It's why the Razorbacks play Texas A&M in Arlington, Texas. It helps both teams recruit.

Oklahoma has long played Texas in Dallas, and for just as long the Sooners have recruited north Texas hard, an area where Oklahoma State and Missouri also fill their rosters.

It's an area the Hogs should be able to infiltrate on a more regular basis because recruits all over the country are very aware of how many NFL players the SEC produces.

Football fever is upon us.

It was present in church last Sunday when a dad said he was taking his son to the game this Thursday and it continued all week and included grandfathers.

There might be one more game next season, maybe not. Regardless, it will be a historical night when the curtain comes down on this long running play and this could be the last chance to be a part of it.