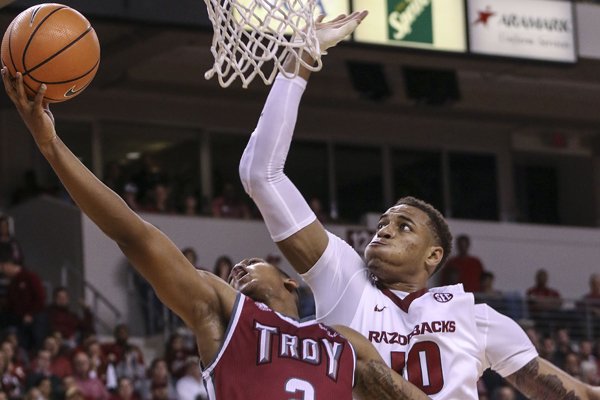 Anton Beard added 11 points and freshman Daniel Gafford had 10 for Arkansas, which entered the game leading the Southeastern Conference in scoring at 88.1 points per game.

Wesley Person scored 25 points to lead the Trojans (5-6), who lost by only eight points at No. 8 Kentucky earlier in the season. Alex Hicks added 16 points and 10 rebounds in the loss.

Arkansas trailed by as many six points in the opening minutes, but Macon scored eight straight points to key an 18-2 run that put the Razorbacks firmly in control.

Troy: Person came Saturday averaging 20.3 points per game and having scored 20 or more points in five straight games. He continued that streak, but it wasn't without a struggle at times for the senior — who finished 5 of 15 from the floor and 4 of 11 on 3-pointers.

Arkansas: The Razorbacks continued what's been nothing short of season-long domination in their wins while earning the 25-point victory. They entered the game with an average margin of victory of 23 points in their first seven wins this season, and they topped that against the Trojans.

Troy is at Austin Peay on Tuesday.