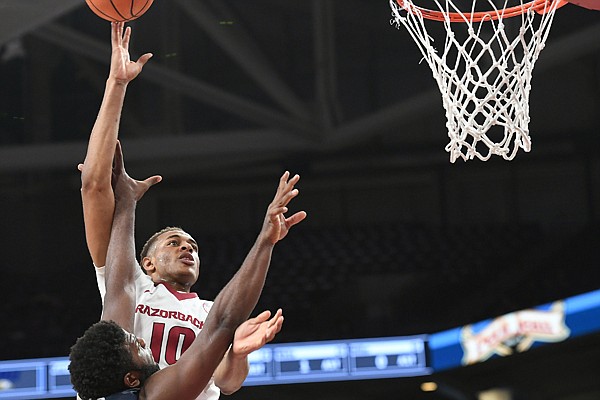 Arkansas' Daniel Gafford shoots over the top of Oral Roberts defender Chris Miller during a game Tuesday, Dec. 19, 2017, in Fayetteville.

The Razorbacks turned in one of their top home performances of the season Tuesday, which says a lot considering how well they've played in Bud Walton Arena to this point.

Arkansas' defense and active hands fed its offense in the win. By halftime all eight Golden Eagles that took the floor had at least one turnover. The Razorbacks turned 16 first-half Oral Roberts turnovers into 25 points – two more points than ORU had at the break.

Oral Roberts was visibly flustered by the full-court pressure in the early going, turning the ball over on more than half of its possessions midway through the first half. Anton Beard, Daryl Macon, Jaylen Barford and even Adrio Bailey came away with steals and numerous deflections.

Deflections is a stat you hear Mike Anderson talk about regularly. The more active Arkansas is defensively the better, obviously. He came away from the win against Troy pleased in that area after recording 50. It isn't something that's kept up with in Arkansas' stat broadcast system, but you can find the numbers in the team's game notes.

I would not be surprised at all if Arkansas set a season-high in deflections against Oral Roberts.

Arkansas forced ORU into 27 turnovers, the most by a Razorbacks team in nearly four years.

Just under the 10-minute mark in the first half, Anderson threw a unique lineup on the floor.

It was a tall and rangy one, especially along the front line, that included Daniel Gafford (6-11), Dustin Thomas (6-8), Arlando Cook (6-8), Anton Beard and Jaylen Barford.

It was the first time the group had been on the floor at the same time all season. It will be interesting to see if Anderson will go back to it perhaps in conference play later this month.

Would you believe Jaylen Barford had only six steals entering Tuesday's game? It's true.

Against Oral Roberts he was as engaged defensively as perhaps he had been all season, coming away with a career-high five steals.

It was just one aspect of a really well-rounded game for the senior, who also led Arkansas with 18 points on 8-of-9 shooting.

The first time Gafford saw a double team Tuesday, he spun baseline a bit out of control before throwing a rocket of a pass over the outstretched hands of Daryl Macon.

The second instance was much better as he hit a cutting Dustin Thomas, who was fouled at the rim. Thomas missed on both free throws, but the play was an example of Gafford's basketball IQ and ability to learn from possession to possession, which is special.

The freshman finished with a career-high four assists, more than he'd totaled in Arkansas' last five games combined and half of his season total coming into the game.

Holmes does it again

Holmes gave them another reason to go wild, too, knocking down a floater to set the final score. He's now scored in seven straight games he's played in, and with each appearance becomes more and more of a fan favorite.

It's fun to see the fans and his teammates react to his buckets.

Following the game, Jaylen Barford continued his campaign to have Holmes come in for a postgame press conference.