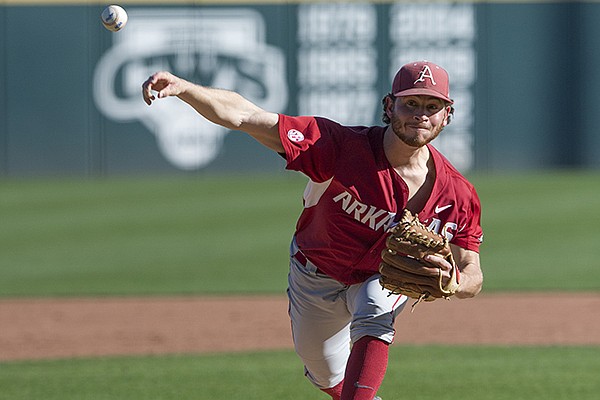 Arkansas senior Josh Alberius throws a pitch during a game against Miami (Ohio) on Sunday, Feb. 19, 2017, in Fayetteville.

FAYETTEVILLE — Josh Alberius has become a media favorite, ever since most figured out that hitting coach Tony Vitello and teammates had dubbed him The Cockroach “because you can't ever get rid of him.”

There aren't many fifth-year players in college baseball these days. Mostly, you get that deep in a college career because of injuries. Alberius got there because he came as an infielder (with no hitting prowess) and eventually converted to pitching.

New Arkansas pitching coach Wes Johnson had heard that Alberius was called The Cockroach, but he hung a new name on his staff stalwart. He called him Big Al because of his mound presence.

Excuse me, but I prefer The Cockroach.

“The Cockroach is pretty good,” Alberius grinned. “I still like that.”

The interesting aspect is that his longevity means he's the lone Arkansas player who recalls two games – a split – with Bryant University in a regional at Kansas State four years ago. The Hogs play host to Bryant with three games this weekend. Starting times are 3 p.m. Friday, 2 p.m. Saturday and 1 p.m. Sunday.

“I was a redshirt,” Alberius said. “But I remember them. They were pretty good.”

Yes, Bryant is pretty good. The Bulldogs have been in three of the last four NCAA tournaments. Head coach Steve Owens is in his seventh season. He took Le Moyne to three NCAA regionals in 11 seasons, including a 2004 trip to Baum Stadium.

If there is anyone on the UA roster who knows more about Bryant, it would be Luke Bonfield, a native of Skillman, N.J.

“I grew up close to there,” Bonfield said of the Smithfield, R.I., school. “It's not far from where I lived in New Jersey. And I saw them play every year since they usually came to play at Rutgers, about 15 minutes from my home.”

Bonfield was a blue-chip prospect with eyes set on the SEC from start to finish, but Bryant was not out of the question.

“I knew about them, because they were good,” he said. “They have good players.”

“There are a lot of people close to them and there is a lot of baseball played there,” Van Horn said. “They are going to get a look at a lot of talent and they get a lot of it.”

The theme of the Wednesday visit with Van Horn was pitching. Among the first questions asked was about Isaiah Campbell. He's out with a sore triceps in his pitching arm. Clearly, he won't pitch this weekend.

There was a suggestion that he might be saving Campbell for a Tuesday trip to Louisiana Tech. After all, Tech saved its weekend ace for a midweek game against the Hogs last year. That didn't seem to be on Van Horn's radar.

“No, I really don't know when (Campbell) will pitch again,” Van Horn said. “But it would be more likely to be on the weekend at Frisco.”

That would be for the a tournament March 3-5 when the Hogs face Arizona, Nebraska and Oklahoma State in Frisco, Texas.

In the meantime, Van Horn knows he'll need more arms than the Hogs used in a three-game sweep of Miami (Ohio) on the opening weekend. The Hogs used eleven pitchers - none more than once - and all were solid. They gave up just two runs while striking out 36 against just six walks.

“They threw strikes,” Van Horn said. “The team we faced was aggressive. They were swinging the bat, but when they didn't and we did get behind, our guys battled and looked good.”

While there is no midweek game this week, the Hogs get with it next week. There are two midweek games in Ruston, La., then three in Frisco.

Beginning next Tuesday, Arkansas will play 15 games in 20 days.

“We are going to need a lot of pitching starting this weekend,” Van Horn said. “That's the challenge for our staff. As far as Isaiah, we will just keep re-evaluating him. We think he's going to be fine, but we are being cautious. You do understand that he's a guy who can give you some innings, so we are missing that right now.”

So far, it's been more about competing for a chance to pitch. They'll all get to throw plenty going forward. Are there other candidates aside from Campbell who did not get on the mound last weekend?

Van Horn said yes, including a couple of freshmen.

“I'd start with Evan Lee," Van Horn said. "He might get to start a midweek game at Ruston. He's a very good freshman. And there's another freshman you didn't see this weekend, a side-armer we really like, Angus Denton.”

Denton wasn't dressed out for the Miami series.

“He came down with the flu and we haven't seen him since Friday morning,” Van Horn said. “Whether or not Angus could pitch this weekend, we aren't sure, but he's very good.”

Lee is one of the prizes of the freshman class. He's a two-way player who did get one pinch-hit plate appearance last weekend. He walked and scored. The Bryant product is a hard-throwing lefty on the mound, although he swings from the right side at the plate.

“Evan is one of our better pitchers,” Van Horn said. “We just didn't get him on the mound last weekend, but he's going to get innings as we head into this next stretch, maybe as a starter.

“We think he's good enough to pitch on the weekend, but he's a lefty and the Miami lineup was almost all from the right side. I think he is going to start Tuesday at Louisiana Tech if we don't need him this weekend.”

Van Horn is pleased with what he's seen so far, although he'll know more when the Hogs face some adversity. They played with the lead all weekend against Miami and won by a combined 21 runs.

“Miami did get the bases loaded with one out when it was 2-1 on Sunday,” Van Horn said. “That was about the only time they put any pressure on us. You are thinking, they are probably going to tie it or get the lead. Then we get out of it with a double play. Carson Shaddy did a nice job turning it at second.”

Speaking of Shaddy, Van Horn said the converted second baseman (from catcher, third and center) settled in as the weekend progressed.

“I thought he was nervous, stiff that first game,” Van Horn said. “He didn't field it too well. He just looked stiff. I told him, 'Settle down, relax.' He finally did. I think he'll be fine there.”

New shortstop Jax Biggers looked smooth and aggressive in handling all seven of his chances.

“He came and got the ball,” Van Horn said. “He looked good in the field. But he was nervous swinging the bat, a lot more than what we'd seen the bulk of the fall. I think he'll be good there. He just needs to play some games.”

The Hogs probably were tighter than usual for the opener. Van Horn said there had been plenty of talk about the 13-game losing streak to end last season.

Did he think about that losing streak at any point Friday, a 7-0 victory after the Hogs scored six runs in the first inning?

“Yeah, I was thinking about it at the start of the game,” Van Horn said. “Then we had the big first. That helps things. I was thinking, it's been a long time since we had an inning like this. It sure was good.”