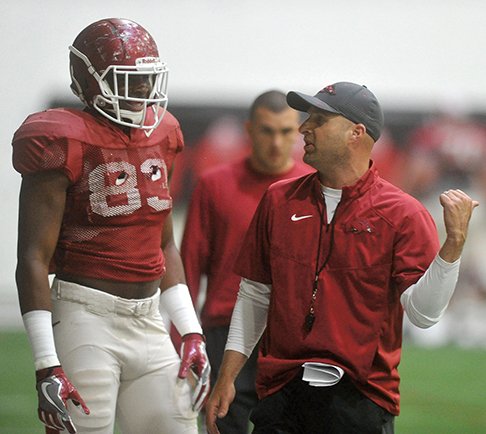 NWA Democrat-Gazette/Michael Woods UP SPRINGS SPRINKLE: Arkansas assistant coach Barry Lunney Jr. works with tight end Jeremy Sprinkle (83) during practice April 5 in Fayetteville. With Mackey Award-winning Hunter Henry departed for the NFL, Sprinkle is ready to be the Razorbacks' No. 1 tight end after catching six touchdown passes a year ago.

Arkansas continued to show tight end Luke Ford how much he’s wanted in Fayetteville on Thursday when the entire coach staff Facetimed him.

“I was extremely excited and little bit nervous when i was going to FaceTime every coach at Arkansas,” Ford said.

The Hogs were the second school to offer Ford, 6-7, 250 pounds, of Carterville, Ill.,on Jan. 23 and he now has 12 offers from schools like Oklahoma State, Minnesota, North Carolina State, Rutgers, Illinois and others.

He plans to visit Fayetteville on March 13.

“They were just talking about how they like me a lot and can’t wait until I get down there,” Ford said. “Talking about my family and how’s school, lifting and basketball was going.”

Ford showed his sense of humor when he got a chuckle out of the coaches when comparing his basketball skills to one of the best in the NBA.

“I told them I was Steph Curry on the court,” Ford said.

The coaches also talked to Ford’s mother, Lisa and his brother. Tight ends coach Barry Lunney Jr. has been leading the Hogs’ efforts to land Ford and Thursday was just a reminder of how important of a recruit he is to the Razorbacks.

“They say I’m their number one priority,” Ford said.