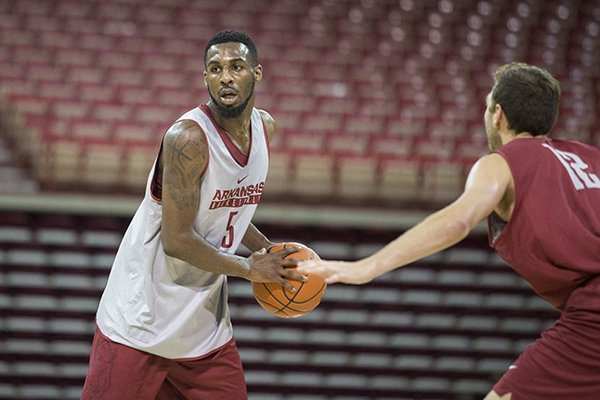 FAYETTEVILLE -- The recent emergence of backup center/power forward Trey Thompson and athletic, energetic forward Adrio Bailey have reduced the playing time of Razorbacks' forwards Dustin Thomas and Arlando Cook, but not their value.

Arkansas would not have eked out a victory over Texas A&M last Wednesday at Walton Arena without Thomas and Cook.

Foul trouble benched both senior center Moses Kingsley and Thompson during the first half. So Thomas played both forward and center during his nine first-half starting minutes. Cook logged seven first-half minutes off the bench.

Those minutes proved pivotal to the game.

Thomas and Cook each tallied two buckets that Arkansas desperately needed after the Razorbacks hit only one of their first eight shots. Thomas also grabbed three first-half rebounds. For the game, Thomas totaled nine points, five boards and a steal.

Kingsley and Thompson flourished during Arkansas' second half against A&M, but knew they wouldn't have started the half ahead without Thomas and Cook.

"D.T. and Arlando, they were big," Thompson said. "With me and Mo in foul trouble, they were attacking us, but D.T and Arlando held it down for the most part in the first half."

Thomas, redshirted last season after transferring from the University of Colorado, and Cook, an acclaimed junior college transfer, have played varying lengths in every game. They've learned in Coach Mike Anderson's system that it's not how long you play but how efficiently.

"I think they're all about winning," Anderson said. "Whatever time they get out there, I think they want it to be efficient basketball, and that's what you're seeing. They're being effective. These guys are new guys and they are just getting comfortable with what we are doing."

And with what they are bringing to the game.

"They're bringing energy and I think they're playing the game the right way," Anderson said. "Dustin Thomas, he's playing with a lot more confidence. You can see that. Offensively, defensively, he's fixing things and for longer periods. I think Cook, the same thing. He probably hasn't played as many minutes, but the minutes when he's out there, he's very, very active. He's productive."

When you add Bailey, who had a free throw and two steals in his seven first-half minutes against A&M, and Thompson, who had five points, six assists, three rebounds and a steal in the same game, and the misbegotten power forward position on last season's 16-16 team becomes a powerful plus for the Hogs when they visit Auburn tonight.

"For that forward spot that you're talking about, we're getting some productivity," Anderson said Thursday. "Some double-doubles. Some points, some rebounds, some defensive presence out there, shot-blocking. And in Trey's case last night, we got assists from that position. I think it's completing our team a little bit more."