Oklahoma State coach would like to play Arkansas more often 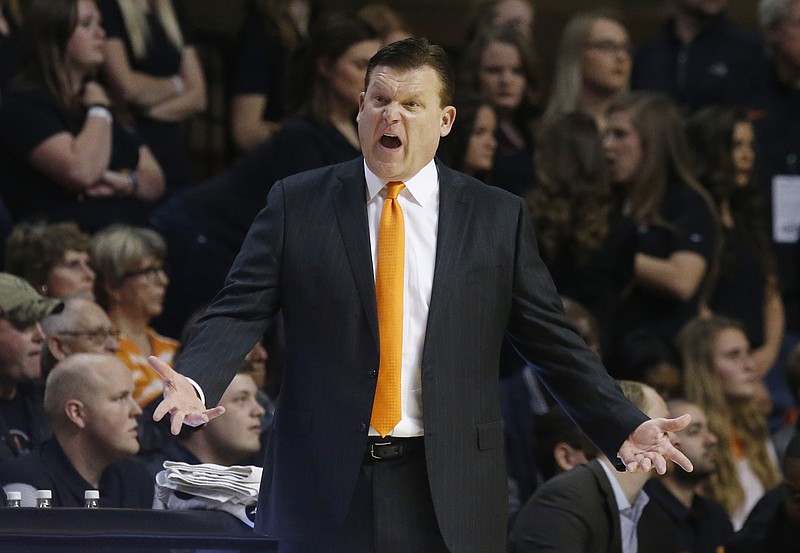 FAYETTEVILLE — Arkansas is scheduled to play Oklahoma State on Saturday for the first time in more than 13 years.

The game was not scheduled by the programs, but instead by their conferences through the Big 12/SEC Challenge, which is in its third season. Arkansas-Oklahoma State is one of 10 games between the leagues on Saturday.

First-year OSU coach Brad Underwood indicated Monday that he would like to see an annual game between the Razorbacks and the Cowboys, whose campuses are separated by about 180 miles, or around three hours driving time.

"They're so close to here, it's a shame we don't play every year or create the rivalry," Underwood said following an 89-76 win over TCU. "I'd love that. (For) our fans, their fans, it'd be a good deal."

There is a long history between Arkansas and Oklahoma State, which first played against each other in 1925. Saturday's meeting will be the 51st all-time between the programs.

Only Tulsa has played more nonconference games (59) against the Razorbacks.

Arkansas and Oklahoma State played 44 times between 1930-71, including twice in the NCAA Tournament. Unlike a football series between the schools that was played almost every year in Little Rock, the basketball teams played most of their games on-campus either in Fayetteville or Stillwater, Okla.

The teams only have played four times since 1971, however. Oklahoma State won all four meetings from 2000-03, which were played at neutral sites in Tulsa and North Little Rock before moving to the campuses for the final two seasons.

The 2000 and 2001 games pitted legendary Arkansas coaches Nolan Richardson and Eddie Sutton on opposing sidelines. Richardson was hired by the Razorbacks after Sutton left Arkansas for Kentucky in 1985.

#OKState hosts Arkansas on Saturday in the #Big12SECChallenge -- Asked Brad Underwood about it & thought he had an interesting response. pic.twitter.com/llxvldyRti