Diamond Hogs have several new faces in the infield 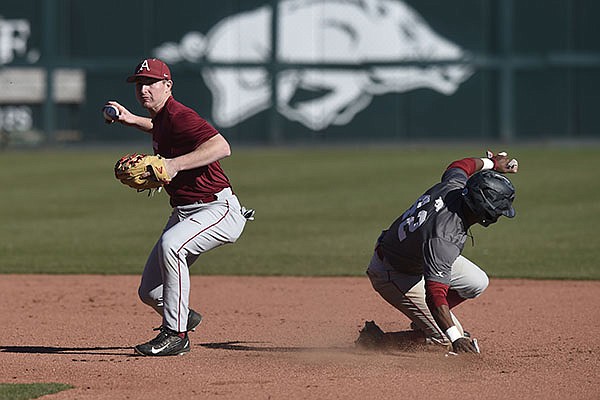 Shortstop Jax Biggers throws the ball to first base after tagging out base runner Jaxon Williams during practice Friday, Jan. 27, 2017, at Baum Stadium in Fayetteville.

"Probably both corner positions on the infield," Van Horn said. "Those are probably the two main positions.

"It's just going to boil down to who can play the best defense along with the bat. It might start out we go more with an offensive guy and let him learn that position a little bit, and then have to maybe make some defensive replacements late in the game."

The Razorbacks struggled to find consistency on the corners last season, which led to several errors during a 26-29 campaign. Arkansas signed several junior college transfers and freshmen during the offseason that likely will see playing time early this year.

JUCO transfer Jared Gates and freshman Jordan McFarland are top candidates at first base. Junior Chad Spanberger also could play the position and also has played outfield and as a designated hitter.

"McFarland had a pretty good fall," Van Horn said. "He's a good hitter from the right side. He has a little bit of power and he runs for a big guy. He can play some first, but possibly DH and play some outfield.

Gates and McFarland also are candidates to play third base, but the leading candidate coming out of fall practice appeared to be Hunter Wilson, a JUCO transfer who started two years ago at Stephen F. Austin.

"Hunter has an unbelievable glove," said Blaine Knight, a projected opening weekend starting pitcher. "I know he's new, but I love what he can do. He's got experience and he glove it and throw with the best of them."

In the middle infield it appears the Razorbacks will rely on Carson Shaddy at second base and Jax Biggers at shortstop. Biggers was highly-recruited out of Cisco Junior College in Texas and had offers from Arizona State, Baylor and Auburn.

Shaddy has played several positions during his career, but Van Horn said he projects best at second base. Shaddy played third base for much of last season, but committed a team-high 14 errors.

Most of the errors came from throwing the baseball, which Shaddy struggled to do following offseason Tommy John surgery. He had bone spurs removed from his elbow last summer and said he feels 100 percent for the first time during his career.

"He has done a tremendous job learning (second base)," Van Horn said. "For the first time since he's been at the university his arm feels good. It's been fun to watch him throw all the time and still smile, and not have a lot of soreness in that arm."