Hogs' catcher 'so much at the McCann level it's scary' 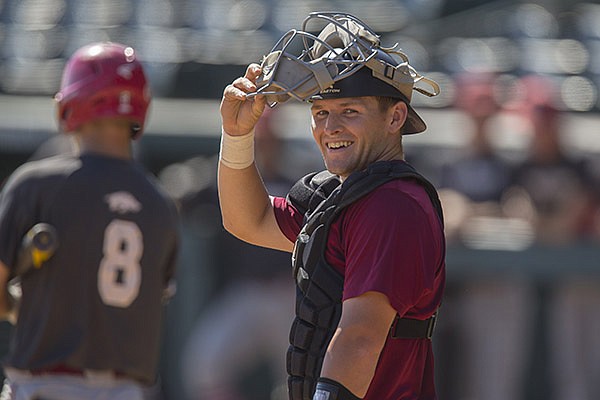 Arkansas catcher Grant Koch looks toward the dugout during a scrimmage Monday, Oct. 17, 2016, at Baum Stadium in Fayetteville.

Van Horn’s catchers have included Brady Toops, Brian Walker, James McCann, Jake Wise and Tucker Pennell - all multi-year starters whose names are still familiar to Arkansas fans. Toops and McCann arguably have the two most significant plays in the history of Baum Stadium.

But one trait has fallen off at the position in recent years. After McCann finished second on the team with a .302 batting average in 2011, the Razorbacks’ catcher hasn’t hit well.

Wise, a three-year starter, was a career .201 hitter. Pennell, a two-year starter, batted .238. Both were typically tucked toward the bottom of the batting order.

But that should be changing this season. Sophomore catcher Grant Koch can hit as well as he can throw, and he can do both pretty well.

Koch was one of the Razorbacks’ top hitters during fall practice. He hit around .450 and had at least five home runs during the fall scrimmages (an official tally wasn’t kept), and also had several more extra-base hits.

At a Glance: Grant Koch

Notable: Had Arkansas' lowest strikeout total among batters with 50 or more plate appearances in 2016.

Because of that performance he has the potential to not only be a big bat for the Razorbacks, but a middle-of-the-order hitter.

“He’s so much at the McCann level it’s scary,” Van Horn said. “He’s a little bit of a thinker like McCann, although he’s not likely to yell at someone. He’s like (McCann) in that you don’t have to worry about what he’s going to be doing on a Saturday night or on the field at practice, or in the class room. You are going to get the same guy every day.

“He had a great fall, maybe the best fall of everyone.”

Koch flashed potential at the plate as a freshman. He started 21 games and also was used in some pinch-hit situations.

He only batted .276, but often came through with timely hits. His 21 hits accounted for 14 RBI.

“It helps their hitting the more they’re hooked up behind the plate,” said Wes Johnson, Arkansas’ first-year pitching coach. “They start to see sequences and start to understand why pitchers are throwing certain stuff.”

Koch said his defensive viewpoint has helped his offensive game.

“I take every pitch I catch as an opportunity to track a ball,” Koch said. “That helps hitting-wise. A lot of times you know what pitch is coming.”

But there is more to Koch than his offense. He also has learned his position better after an off-season working with Josh Elander, a volunteer coach who was a minor league player of the year in the Atlanta Braves organization.

“He was an extremely traditional guy,” Koch said of his work with Pagnozzi. “What I liked about him is that he let me be myself and he taught me that there is no set form, no specific way to catch. As long as I got the job done, he was always supportive. He always had that knowledge that he gained and would give that to me every single day on how to call pitches, how to call games. I think that can really help me at this level.”

Koch said he throwing stronger and more accurate after a summer in the weight room. Blaine Knight, a likely starter on the pitching staff, sees other differences. 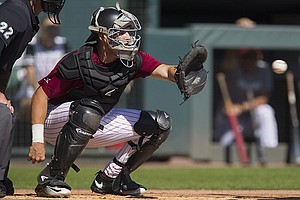 “In high school you could kind of get away with what Grant’s style of catching was,” Knight said. “He was gloving at the ball in the dirt instead of gloving up; stuff like that. You can get away with that in high school but you can’t in college. If there’s a guy on first and a ball is in the dirt, they’re gone.

“Now, his whole style is almost a mimic of Tucker. I almost thought Tucker was catching me a couple of times in the fall. It’s kind of weird.

Johnson said he is hopeful Koch can eventually call his own pitches, although Johnson will call games to start the season.

“His tools are really good, meaning he receives well and throws well,” Johnson said. “Those haven’t been issues at all. Now you’ve got to coach his brain on sequences and situations…and that’s stuff that Grant has really taken off on and is going to give him a chance to be pretty good this year.”

Koch also was voted a team captain along with a pair of fourth-year players, infiedler Carson Shaddy and right-handed pitcher Dominic Taccolini. Being a captain is another trait that Van Horn’s best catchers have had.

“Grant is not real verbal, but with him being a captain now he knows he can say something if he sees it’s needed,” Van Horn said. “They will listen to him because of the way he practices and carries himself.”