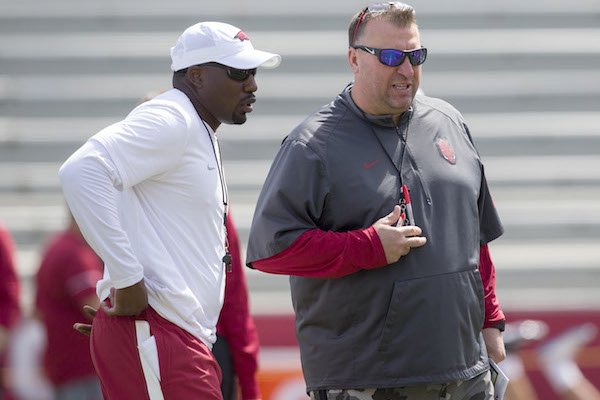 Arkansas Razorbacks will host one of their top remaining targets in the 2018 class when defensive lineman John Mincey arrives in Fayetteville this morning for an unofficial visit.

Mincey, 6-4, 265 pounds, 4.7 seconds in the 40-yard dash, of Homerville, (Ga.) Clinch County received a scholarship offer from the Hogs in May to go along with approximately 20 other scholarship offers from schools like Florida, Georgia, Auburn, Mississippi State, Kentucky, Washington State, Oregon State and others.

"I just want to take a good look at the campus and talk with the coaches," Mincey said of the Razorbacks. "They're looking forward to me coming down."

Defensive line coach John Scott Jr. recruits Georgia and has convinced several of that state's prospects to travel to Fayetteville for a visit. Mincey said Scott stays in contact with him and that helps his interest in the Hogs.

"He's a just a good person," Mincey said. "He tells me good things that can happen to me and I would be a good fit for the program and I also believe that too."

An excellent visit could convince Mincey to commit to the Hogs.

If Mincey does pledge to the Razorbacks, he said it's likely he'll stop visiting other schools.

Beck, 5-9, received her first scholarship offer from the Razorback on July 13 and that likely won't be her last. She was thrilled to get the offer from Neighbors.

"If I did go there. I would have somebody to talk to about Arkansas because my dad went there and my dad is my role model," Beck said.

Beck averaged 15 points, 6 rebounds, 3 assists and 3 steals for Fayetteville's freshman team this past season. Beck attended a team and individual camp at Arkansas this summer and was able to get to know Neighbors.

"I like Coach Neighbors," Beck said. "I think he's a very cool guy He makes me feel very comfortable. He gets us."

Beck and three others who have received offers from the Razorbacks, guard Sasha Goforth of Fayetteville, guard Destiny Salary of Jonesboro and forward Taylen Collins of Muldrow, Okla., play for the Arkansas Banshees Premier 16-under.

Neighbors has seen the Banshees several times this summer, most recently on Sunday at the Battle of the Bayou in New Orleans.

Beck is a fan of the way Neighbors coaches and lets his team play.

"I like his coaching style," Beck said. "He went over how he runs his plays at the team camp and I like the style of play."

Her father played with a relentless effort and hopes his daughter does the same.