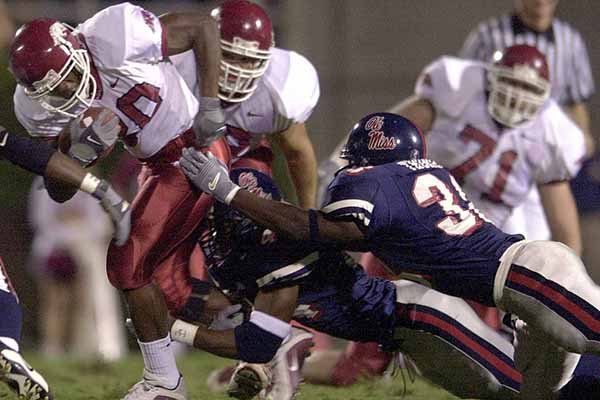 Arkansas running back Fred Talley carries the ball during a game against Ole Miss on Saturday, Nov. 3, 2001, in Oxford, Miss.

The mind is a mysterious thing that can even rewrite history given enough time.

Take for instance the Arkansas-Ole Miss seven overtime game 16 years ago, which came in No. 3 on the list of most memorable games since Arkansas joined the SEC 25 years ago.

Think about that game and who is the person that should immediately come to mind, Matt Jones.

In some ways, rightfully so, because Jones completed 3 of 6 passes and each of his completions was in overtime and he also has the two-point pass completion to DeCori Birmingham in the 7th overtime that put the Hogs up 58-50.

Jones, though, was not your starting quarterback that day. Zak Clark played most of the the first three quarters.

It wasn't until the last play of the third quarter, in fact, when Jones came in and ran 6 yards for a first down with the Razorbacks facing a third and 6 that he was the quarterback the rest of the way.

He and that game are written in ink as part of sports history for the University of Arkansas, Fayetteville.

Jones stood especially tall on a night when Houston Nutt later said they ran out of plays in overtime and were drawing up new ones in the dirt.

Jones ran for 100 yards in the game, 55 of them in overtime. He ran for two touchdowns in overtime, plus his three completions accounted for 61 yards.

He was so elusive, so quick to improvise, the Rebels basically sold out to stop him and the running game in the final quarter and the seven overtimes.

Yet, he obviously was not the only hero in a game that for the first and only time your trusty scribe quit typing on deadline.

The game had blown through the extended state edition deadline before the fifth overtime, and the decision was made at that moment to keep taking notes, but to stop writing, deleting and editing. The game was that compelling. And for the record, the updated deadline was made with ease.

The Hogs took a 58-50 lead, then turned it over to Eli Manning, the Ole Miss quarterback.

Manning, who passed for six touchdowns and 312 yards, led his team to another touchdown and the roar in Oxford could be heard in Tupelo.

But the Rebel yell was swallowed in an instant when Jermaine Petty stopped the two-point conversion at 10:20 p.m. on a game that had started at 6:06. What you heard then was the thrilled whooping and hollering of a handful of Hogs fans.

In that game Tony Bua had 13 tackles, Eddie Jackson added 10 and a total of 11 Razorbacks had at least 4 tackles.

The Razorbacks ran 106 plays and 80 of them on the ground. Arkansas converted 16 of 26 third downs and were 3 for 3 on fourth downs. It was a total team effort on both sides of the ball. The offensive line allowed zero sacks and only two tackles for loss in what became an instant classic.

It received the No. 1 vote as most memorable game of this Silver Anniversary series by your trusty scribe.

Neither team was ranked but it was the fourth consecutive victory for the Hogs who had started 1-3 and the lone victory win was against UNLV, a 14-10 escape -- uglier than a Seattle rainstorm -- when every Razorback quarterback but one saw action -- Matt Jones.

Ole Miss came into the game 6-1 and riding a five-game victory streak including a 35-24 victory at LSU the week before. The Rebels then lost the next two games and both teams finished the season 7-4.

It was not a great season, but it was a great game, and in the mind of at least one the most memorable game in the last 25 years.