State of the Hogs: SEC champ Brooks heading to nationals with flair 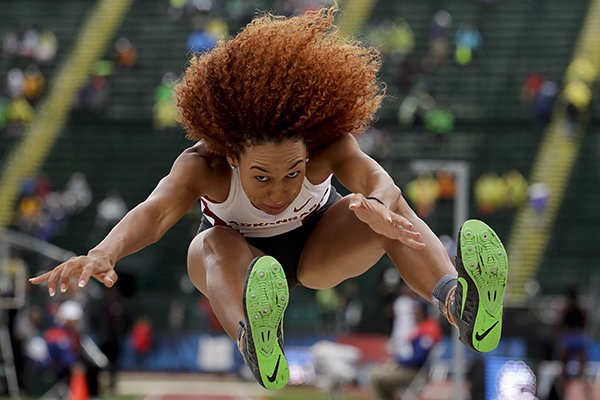 FAYETTEVILLE — When you meet Taliyah Brooks, there is a tough choice in picking the dominant feature. Is it that wonderful, bright smile, or the brilliant red hair?

Both are beyond awesome.

Then, there is the way she takes off at the long jump pit for another great sight. That wonderful red afro parts behind her, sticking straight out. It's a show stopper as she soars through the air, hitting record marks over and over.

I told Brooks my thoughts on her hair and smile this week during an interview ahead of next week's NCAA Track & Field Championships in Eugene, Ore. Brooks won the SEC championship and ranks second nationally with 6,099 points in the heptathlon, and figures to score at the NCAA meet for the No. 2 Arkansas women.

The redshirt junior from Wichita Falls, Texas, is always vibrant, but she's especially excited for this trip. It's going to be a rare meet where she's not trying to score in three or four events, but instead just focusing on the heptathlon.

“We want Taliyah just to specialize in the multi event next week,” said Lance Harter, the longtime Arkansas coach fully aware that specializing in the multi is really not speciality at all.

Brooks, a six-time All-American, usually tries to give the Razorback points in the long jump or one of several running events, too. She's the UA record holder in the long jump (21-0), having originally broken a 23-year-old school record last year.

“This is going to be great because it's the only time I've ever been 100 percent completely fresh for the multis,” she said. “Really, I don't remember when I've ever just done the multis. I've been doing the long jump and the 800 in addition since I was young. I guess it goes back to when I started the multis in about the seventh grade.”

There are events that are more fun than others. She loves the long jump and high jump. The throws are just OK. It's the hurdles she talked about the most.

“Oh, yeah, the hurdles,” she said, smiling and shaking her head, that beautiful hair wiggling.

“Me and the hurdles have trouble. I have a love-hate relationship with the hurdles.”

Taliyah Brooks competes during the heptathlon high jump at the U.S. Olympic Track and Field Trials, Saturday, July 9, 2016, i... + Enlarge

There is only love for that hair. She dyes it red.

“My dad calls me Red,” Brooks said. “It's naturally curly. I don't put anything on it. Some of my teammates on our track team call me Red, too.

“On social media, sometimes I just put #FeartheFro. It's funny, my (two) sisters all have the same hair. We look identical.”

Brooks had a hard time just picking track, much less just concentrating on the multi events as her calling card. She was more than a track athlete growing up.

“My love was basketball,” she said. “I played point guard and I really did enjoy playing. I thought I was going to run track and play basketball here.

“Tom Collen was the basketball coach here and recruited me for basketball along with Coach Harter for track. I was prepared to do both, then Coach Collen was replaced by Coach (Jimmy) Dykes by the time I got there. The deal was, I could play both. Coach Harter thought that was fine. Coach Dykes said I could. I really liked him.”

“I tore my ACL in my next to last basketball game in high school,” Brooks said. “So when I got here, I had to rehab that. I had to put basketball on hold. I still wanted to do it at some point.”

Dykes said she was good enough to play basketball for the Razorbacks.

"There was also some talk that one of her sisters was going to come here to play, too," Dykes said. "They are both really talented.”

Then, there was another serious injury in the spring of her true freshman year. She sustained a cracked hip bone in the long jump. There were other injuries in that spill, including a torn hip labrum. She was done after just two meets and was granted a medical redshirt.

“The real problem was that I'd gained weight while rehabbing the ACL surgery,” she said. “I got up to 150. My normal body is 123. That's why I got hurt I'm sure.

“So I had to lose weight while I was on crutches. That's tough to do.”

“He helped me lose 25 pounds to get back to my good weight,” she said. “I guess everyone gains a little weight as a freshman, but it was beyond the typical freshman 15 because I was hurt.”

By Andy Shupe Taliyah Brooks of Arkansas laughs as she competes in the high jump Friday, Jan. 15, 2016, during the Arkansas Invitational at... + Enlarge

That was not a fun freshman season.

“No, lots of bumps and bruises,” she said. “When you are hurt and can't compete, it's tough. It's all I've known.”

Harter called it “hard times.” It's difficult to take meets away from a competitor.

“You get to feeling like an outsider, because of the rehab,” Harter said. “You can't travel and we work hard to make sure they still feel part of the team. But it's still easy to fall into something that's almost like depression.”

There is little doubt Brooks is a fierce competitor.

“She is vicious,” Harter said. “If she played football, she'd play offense, defense and special teams. She'd ask for the ball on the goal line. If you are in the final seconds, she'd demand the ball.

“So when we are figuring points in a conference meet, she'll tell us, 'I have a break in the multis here, so give me this, give me that,' and just volunteers for event after event. She'll say, 'I can do this and this.' She is about the team.

“Her mind is so strong. You have to be like that to do the multi events. The mind has to be stronger than the body.”

Brooks didn't deny any of that. It's that ability to compete that helps her as she goes through the grueling schedule of the multi events.

She's got a little less on her plate next week at Eugene. It's not like she asked for a lighter load, but there was a smile when it came up.

For an instant, that smile might have been brighter than that beautiful red hair.