State of the Hogs: Mortensen impressed by fans in marathon game 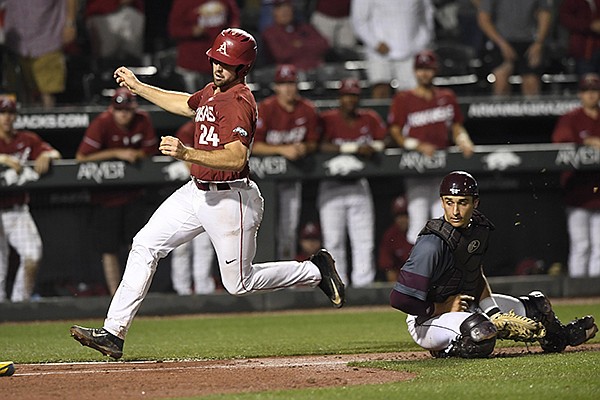 FAYETTEVILLE — Missouri State opens the NCAA Super Regional at TCU on Saturday. With all due respect to the fans at Lupton Stadium, it's safe to say the Bears will see a more tamed crowd than their last one.

Whether you talked to coaches, fans or media, there was no one who has ever seen anything like Game 6 of the NCAA Fayetteville Regional.

That was the case until I ran into Chris Mortensen just before Game 7 on Monday evening. Mortensen, decked out in a Razorback shirt, smiled and explained his déjà vu experience.

Mortensen, ESPN's NFL Senior Analyst, lives in Tonitown. He's a regular at Baum Stadium in the spring when his pro football schedule is the lightest. He's got more time than usual as he continues to recover from throat cancer that sidelined him last football season.

It was Mortensen who was ready for a wonderful tale when I asked if he'd seen anything close to the six-hour game of last weekend. Yes, he'd seen something amazingly similar in the summer of 1985. The Atlanta Braves and New York Mets played a 19-inning game (with two rain delays) that also went six hours. The Mets won 16-13.

Mortensen was the beat writer covering the Braves for the Atlanta Journal Constitution. He finished his story at 6 a.m. after the game for the paper's afternoon edition, just as I did this week for WholeHogSports.com.

“What I can tell you is that the games were so much alike,” Mortensen said. “Rain, time, the craziness. What I must tell you: the Hog fans represented better.”

The stands in Fulton County Stadium were empty at the conclusion of the game, after starting the night with a sellout of 44,947. There was no one left but players and workers when fireworks were set off at 4 a.m. on July 5.

“They were going to have a fireworks show that night, July 4th,” Mortensen said. “They went ahead with the fireworks, which alarmed all the nearby residents.”

Mortensen fell in love with this Arkansas team. He likes to tell stories of watching them last year, too, when he left MD Anderson Hospital in Houston during his chemo treatments to watch three UA games at MinuteMaid Park.

On the 2017 Razorbacks, he said, "They were so much fun to watch. They were really good. I love going to Baum Stadium. This team with all of that power and the way Chad Spanberger caught fire just made the spring a lot of fun for me."

Mortensen is still trying to regain strength in hopes of returning to ESPN in some capacity this coming NFL season. He said watching the Hogs gives him energy.

We all need a little boost this week. That's what happens when you watch baseball all night.

Mort called the UA-MSU game the most memorable he'd watched since that Braves game, won by the visiting team. There are some noteworthy elements of that Braves game, including a former Razorback in the dugout, Mets catcher Ronn Reynolds.

However, Reynolds is a sad asterisk. He is the only position player from either team not to play in the game. It's the way his 1985 season went from start to finish. He was the backup to Hall of Fame catcher Gary Carter. Seldom did Carter take a break and he didn't in that marathon.

There was controversy in both games. The Mets filed a protest in the game when pitcher Dwight Gooden was required to take the mound for at least one pitch after a third inning rain delay. Davey Johnson, the Mets manager, was later ejected along with Darryl Strawberry in the 17th inning for arguing a called strike.

Umpire Terry Tata gave Johnson the heave ho and then said, “Davey, at three o'clock in the morning, anything is a strike.”

Missouri State coach Keith Guttin was upset with the NCAA decision to continue the game at 12:35 a.m. He also thought another shower about two hours later should have brought on the tarp for a second time. The Bears led 8-7 midway through the eighth inning at that point, then promptly gave up four runs as they slipped around in the rain, just as the Hogs did in the top of the inning.

“Give Arkansas credit for coming back,” Guttin said, “but I don't think games should be decided in the rain at 3 a.m.

"I think you need to ask the umpire what was said because I would probably be suspended if I say the truth."

Guttin was livid when Arkansas coach Dave Van Horn seemed to convince home plate umpire Ramon Armendariz to reverse a decision to bring out the tarp in the eighth inning. In reality it was the NCAA's on-site liaison, Gene McArtor, who made the call to play on.

McArtor was head coach at Missouri for 21 seasons. That might have infuriated Guttin, too.

Van Horn was right in arguing that the conditions were about to improve and the grounds crew could work some magic with drying dust. And, he said, if the Hogs had to play on a wet field, the Bears should, too.

There were several Arkansas baseball legends oblivious to all of it.

Former Arkansas baseball coach Norm DeBriyn was in bed early Sunday night because he had an early trip to Little Rock the next morning to play in a charity golf tournament for the Arkansas Sports Hall of Fame. DeBriyn, bothered by a neck issue, went to bed soon after the first pitch at 9:10 p.m.

“I had no idea what was happening,” DeBriyn said this week. “My wife (Caroline) came in at 1 a.m. I asked her who won. She said, 'It's just in the third inning. They are in a rain delay. They are going to play all night!' I couldn't believe it. Would anyone?”

Detroit catcher James McCann, another Arkansas baseball legend, planned to watch it. But he fell asleep almost immediately and had no idea of the result until the next morning. He texted during Game 7, “I'll stay awake tonight: Calling the Hogs in Detroit. I can only imagine the atmosphere at Baum this morning. It's a wonderful place and most of the greatest memories of my life happened there.”

It all comes together to make it the most remarkable game almost everyone has ever attended at Baum Stadium, or anywhere else if you ask Van Horn or his players.

“I'll remember it for the rest of my life,” Van Horn said.

It was even something to talk about that night after the Bears earned a 3-2 decision in Game 7 to advance to the Super Regional and end the UA season.

Van Horn said the lack of offense in the finale – just nine hits combined by the two teams – was due to the late finish earlier that morning. He said he was tired and he didn't play and the position players (more than the pitchers) were too exhausted to put together any offense. He got home from the park about 6 a.m.

DeBriyn commented on the lack of offense, too. He said worn out legs slow down bat speed. The lack of hits for two good offenses made sense. "That's absolutely what can happen," he said.

Tony Vitello was still talking about the all-night affair on Wednesday after being announced as the new head coach at Tennessee. The former Arkansas recruiting coordinator and hitting coach said there was no thought of fatigue as the coaches left the stadium Monday morning. They were still giddy.

“Coach Van Horn and I were joking after showering in the clubhouse after the game,” Vitello said. “I think that win will live forever in Razorback history and tradition. Neither one of us were even tired. We both said we felt like we were in Las Vegas.”

Mortensen thought it was like he was in Atlanta, but with better fans.