Swamped: Whistles got in way of upset bid 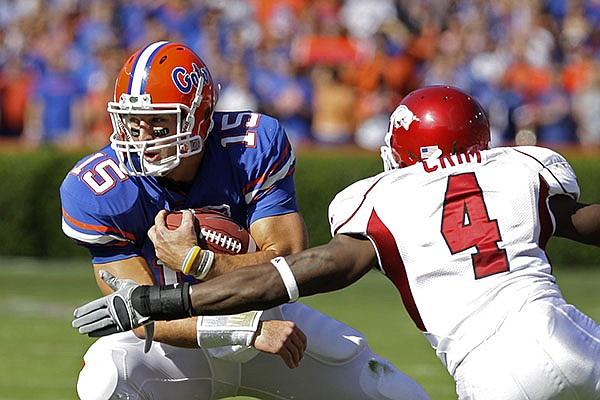 FAYETTEVILLE — Upstart Arkansas, in its second season under Coach Bobby Petrino, gave defending BCS champion and No. 1 ranked Florida a scare to remember at The Swamp on Oct. 17, 2009.

If not for a handful of controversial decisions by the officiating crew, which drew a suspension from the SEC office following the game, the 2009 Razorbacks might have notched one of the biggest upsets in school history.

Florida survived with a 23-20 victory in the record books, but a series of questionable penalties and non-calls all benefitted the Gators.

Why This Game Mattered

Arkansas, in the midst of rebounding from a 5-7 season in 2008, lost out on a chance to upset the No. 1 team and break the Gators' 15-game win streak.

The officiating crew led by Marc Curles was suspended until Nov. 14. The most egregious offense was for Curles’ personal foul call against Arkansas defensive lineman Malcolm Sheppard when he was clearly not the aggressor. But many other decisions helped the Gators:

“We were definitely frustrated and upset. … We played our hearts out and it looked like the game just got taken away from us towards the end,” said Arkansas defensive end Adrian Davis in 2013 when reminiscing about the game four years earlier.

Said Sheppard in 2013, “After the game’s over, you go back and look and you know everybody’s been a part of games that were called unfairly, but I’ve never been a part of one that was called to that extent before.”

The pass interference on Broadway and the personal foul on Sheppard came on back-to-back plays in the fourth quarter with Arkansas leading 20-13 and led to a Florida touchdown.

“That PI call on Broadway, like that was crazy,” Sheppard said. “When it came to the personal foul that I got, it was like what can you do? It’s like somebody taking destiny or free will out of your hands.

The officiating decisions clearly angered NFL receiver Terrell Owens, who famously wrote on Twitter during the game that the officials were "cheating."

Arkansas Coach Bobby Petrino drew a reprimand from SEC commissioner Mike Slive the following week for commenting on his weekly TV show on the no-call on the Hogs sideline against Johnson, “Unfortunately in Florida they don’t call it that way.”

“It’s been a rough week,” Curles told Solomon. “As soon as I saw the play in question [the penalty on Sheppard] on the DVD after the game, I knew then that the call was not a good one. It’s been eating at me ever since.

The SEC’s action on Curles and crew was the first time the conference had publicly announced a suspension, according to AL.com.

“I had a bad game,” said Curles, who told AL.com that he received between 75 and 100 negative e-mails and phone messages after the game. “My regret is because of something I did, my whole crew is suffering because of it.”

Despite the controversial officiating decisions, the Razorbacks had a chance to take a late lead after driving 56 yards to the Florida 20 with the game tied 20-20. Arkansas could not convert on a second and 4 or third and 4 from there, then Alex Tejada missed a 38-yard field goal try.

The Gators drove 69 yards in 2:59 to win it on Sturgis’ 27-yard field goal with nine seconds remaining.

The game was tight statistically, with Florida out-gaining the Hogs 391-357 in total offense. The Razorbacks won the turnover battle 4-0, with fumble recoveries by Zach Stadther, Jerry Franklin, Broadway and Tramian Thomas on two turnovers by Tebow and one each from Aaron Hernandez and Chris Rainey.

Three of Florida’s lost fumbles came in the first half.

“Wow, six sacks and four turnovers,” Meyer said. “Six sacks? I don’t know if we’ve ever had six sacks. Yeah, we’ve got to get that fixed.”

Arkansas’ best play came when Mallett stepped up in the pocket and hit a streaking Greg Childs deep down the field. Jarius Wright was still blocking a Florida defensive back 70 yards down field to help Childs complete the 75-yard catch-and-run touchdown to give the Hogs a 20-13 lead with 9:40 remaining in the game.

The Razorbacks’ other touchdown was scored by Broderick Green on a 1-yard run early in the second quarter after a sack by Jake Bequette forced a Tebow fumble recovered by Stadther at the Gators’ 31.

Petrino said on his Sunday TV show he was “unsatisfied” after talking to then-SEC coordinator of officials Rogers Redding about the calls in the game.

“It’s unfortunate that in the fourth quarter there’s probably three plays that the officials made that were the difference in the game,” Petrino said.

“The game was so close and I felt like they were doing anything they possibly could to now allow an upset that day,” Broadway said. “A lot of things were called that were definitely not the right call.

“I remember those referees getting suspended. Unfortunately they get suspended, take a little pay cut, but we don’t make history. I think that’s what bothered us the most about that game.”