Three-minute crash: Hogs black out with victory in sight 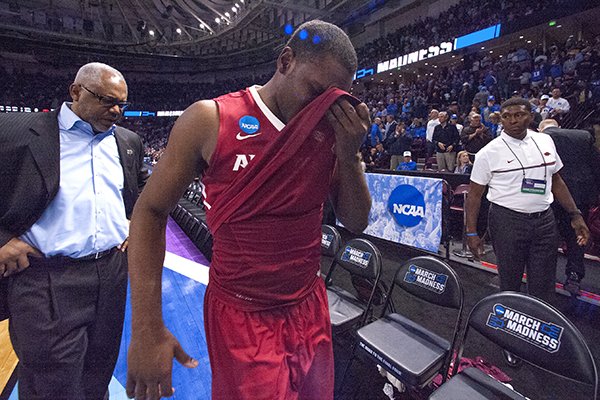 Arkansas senior Manny Watkins and his father, Razorbacks assistant coach Melvin Watkins walk off the floor following a 72-65 loss to North Carolina in the NCAA Tournament on Sunday, March 19, 2017, in Greenville, S.C.

GREENVILLE, S.C. -- In a season full of big comebacks for the Arkansas Razorbacks, it looked like they might pull off their biggest Sunday night against North Carolina.

The No. 1 seed Tar Heels dug in defensively and held the No. 8 seed Razorbacks scoreless the final 3:28 to win 72-65 in a second-round NCAA Tournament game at Bon Secours Wellness Arena.

North Carolina (29-7) advanced to play Butler in the South Regional semifinals in Memphis.

The University of Arkansas, Fayetteville (26-10) fell short of making the Sweet 16 for the first time since 1996.

Arkansas didn't score after guard Jaylen Barford hit a layup to put the Razorbacks ahead 65-60.

"We just didn't execute on offense down the stretch," Arkansas guard Manny Watkins said. "When we had the lead we kind of played on our heels a little bit instead of attacking and trying to score. ... That's on us."

Daryl Macon -- who led the Razorbacks with 19 points --came back into the game after sitting out for a 2:59 stretch because of leg cramps.

Macon got the ball with the shot clock running down and had to heave up a shot that missed the basket as he was swarmed by North Carolina defenders.

"I had to jack something up just to get the ball out of my hands," Macon said. "We didn't come out and execute that possession as well as we had been doing the entire game."

The Tar Heels went up 68-65 with 44 seconds left on a tip by Kennedy Meeks after a mss by Joel Berry, who knocked down Arkansas forward Adrio Bailey as he drove to the basket.

But after rallying from down 17 points in the first half to take a five-point lead, the Razorbacks couldn't hang on to win.

TURNING POINT The Tar Heels outscored the Razorbacks 12-0 the final 2:56.

KEY STAT North Carolina had a 16-4 edge in second-chance points.

UP NEXT Arkansas goes into the offseason.

Razorbacks Coach Mike Anderson said he thought Berry would either be called for a charge or for taking too many steps.

"I thought he ran over one of our guys," Anderson said. "If he didn't, he traveled."

Anderson added the no-call wasn't the difference in the game.

"I just thought we had some bad turnovers at the wrong time or we didn't get a good shot," he said.

Rather than play for a three-pointer down 68-65, the Razorbacks looked for a quick score going to senior center Moses Kingsley, who was fouled by Hicks with 25.2 seconds left.

Kingsley, who came into the game shooting 75.0 percent from the line, missed both free throws.

The Razorbacks still had a chance to send the game into overtime when Berry missed the front end of a 1-and-1 opportunity with 20 seconds left.

Arkansas senior guard Dusty Hannahs got the ball and was looking for game-tying three-pointer, but Justin Jackson made a steal and dunked with three seconds left to clinch the victory.

Hannahs was asked the game if he believed Jackson fouled him.

"I thought I got fouled quite a bit," Hannahs said. "But that's how the game goes.

"No excuses. I should have been stronger with the ball. That's it. That's all I've got.

"It was just tough. We were so close."

"So there's some toughness there, too. The guys stepped up and made some plays."

Macon's three-pointer put Arkansas ahead 58-55 with 8:16 left and started a 10-5 run by the Razorbacks and they were on the verge of winning a sixth game away from home in which they trailed by 12 or more points.

But the Atlantic Coast Conference champion Tar Heels had a comeback in them, too.

"I don't think they had an open shot the last three minutes," Williams said. "Every shot they took was challenged."

Junior guard Anton Beard scored 10 points off the bench for the Razorbacks. Kingsley and Barford each scored nine points and Hannahs had eight.

"I think we just dictated what we wanted them to do instead of letting them attack us and doing what they wanted to do," Berry said. "I think that last three minutes we forced them into some bad shots."

It was the third consecutive NCAA Tournament appearance for Arkansas that ended with a second-round loss to North Carolina.

"We came to dance, not to do the one step," Anderson said. "We wanted to bust up some brackets.

"But close don't get it done. At the end of the day I thought they made more plays than we did.

"I thought we had some bad decision-making going down the stretch. You can credit that to their defense, but you can also credit it to our guys making the wrong decision."