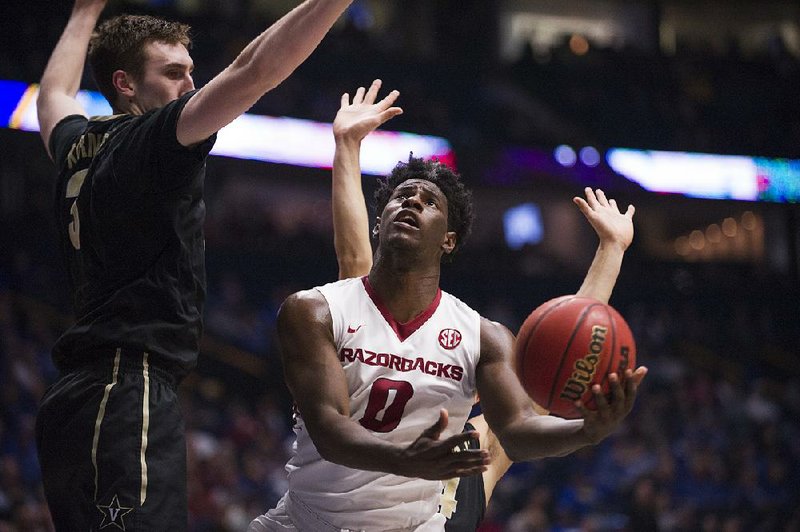 NWA Democrat-Gazette/J.T. WAMPLER Arkansas' Jaylen Barford eyes the hoop while Vanderbilt's Luke Kornet defends Saturday March 11, 2017 at the SEC Tournament at the Bridgestone Arena in Nashville. Arkansas beat Vanderbilt 76-62 and will play Sunday in the championship game against Kentucky.

This is the second installment in a 12-part series reviewing the 2016-17 season for each of Arkansas’ scholarship players.

— Played much better as the year went on and he grew more comfortable with his role, averaging 16.4 points in the final 11 games, a big spike from the 11.2 he put up the first 25. Became a much more aggressive scorer who hunted his shot late in the season. His 27.4 usage rate led the team and it ballooned to 31.2 in the final 10 games.

— Volume scorer capable of getting hot and going on game-changing solo runs over the course of a minute or 2. Flashed this ability to take over a game more as the season wore on.

— Strong upper body and deft touch allowed him to finish creatively around the basket better than anyone on the team. His sturdy frame gave him the ability to finish through contact, evidenced by his team-high 16 and-1s.

— An elite transition scorer. Shot 60.2 percent from the floor and averaged 1.188 points per possession in transition, according to Synergy Stats, which put him in the 74th percentile nationally. He was at his best as the ballhandler, able to get a head of steam and barrel downhill toward the rim. His 61.8 percent shooting and 1.197 points per possession as a ballhandler in transition put him in the 90th percentile of all players.

— Can finish above the rim. His 8 dunks ranked second on the team.

— A good backdoor cutter with a feel for when the defense is leaning the wrong way and overplaying passing lanes.

— Perhaps the team’s best post-up threat. Used his size to exploit mismatches when posting guards on the block. Made 6 of 8 post-up shots, a small sample size but a gaudy figure that put him in the 97th percentile nationally.

— Shot a solid 75.2 percent from the foul line on a little more than 3 attempts per game. He plays with a physicality that probably warranted more calls when he attacks the rim, whistles he may get on a more frequent basis next year with a raised profile.

— Used his strength to fight over ball screens and stay a part of the play on a fairly consistent basis. Also used his frame to his advantage when walling off opponents' drives.

— Turned up his intensity on the defensive end late in the season, averaging 2.4 steals in the final 7 games.

— Routinely displayed toughness. Played with an edge, didn’t back down to anyone and was willing to go to bat for his teammates. He led by example and his full-bore ahead attitude rubbed off on his teammates.

— Inconsistent shooter who had 7 games with multiple made 3-pointers but hit just 26.6 percent of his attempts from range. Ranked in the 62nd percentile in shooting off the dribble, but made just 16 of 64 catch-and-shoot jumpers, which ranked in the 17th percentile in the nation. Some of his misses were forced shots as a result of the shot clock dwindling or the offense bogging down. Did make 8 of 20 jumpers between 17 feet and the 3-point line, a solid number for a low-percentage shot.

— Had nearly as many assists (72) as turnovers (71). Showed flashes of being a playmaker who could get into the teeth of the defense, draw help and find a teammate for a dunk or 3-pointer, but was inconsistent in that regard. The expectation of being a lead guard seemed to affect his play early in the season when he limited his shots and was content at times to be a ball-mover. But his playmaking took a hit as he became more assertive. In those final 11 games, he had just 17 assists to 27 turnovers. His 11.6 assist percentage ranked fifth on the team and fourth among the 5 rotation guards.

— Was not typically an efficient scorer, the result of his jump-shooting inconsistency and the difficulty of the shots he often took. His .443 effective field goal percentage, which makes 3-pointers worth 50 percent more than 2s to reflect their value, ranked eighth among the nine rotation players. The tough shots he hit in transition were harder to make in crowds, evidenced by his 53.1 percent shooting around the rim in halfcourt settings, a mark that ranked in the 46th percentile nationally. He made 9 of 35 runners, which put him in the 25th percentile.

— Got lost off the ball occasionally or helped and couldn’t close out in time. Opponents shot nearly 46 percent on catch-and-shoot jumpers when he was the primary defender, a mark that was in just the 12th percentile nationally.

— Had trouble preventing dribble penetration against quicker point guards at times, which could lead to defensive breakdowns elsewhere.

Barford’s finish to his first year at Arkansas was impressive and encouraging, the type of close that points to a potential all-SEC senior season. He has a chance to be one of the most dynamic players in the conference if he can find the balance between scoring and playmaking. His penchant for taking tough jumpers drags down his percentages, but he has potential as a shooter and it feels like the numbers don’t always do him full justice as a scorer.

His aggression, toughness and the force he plays with create an impact that goes beyond stats. He will be a vital cog for the Razorbacks next season.