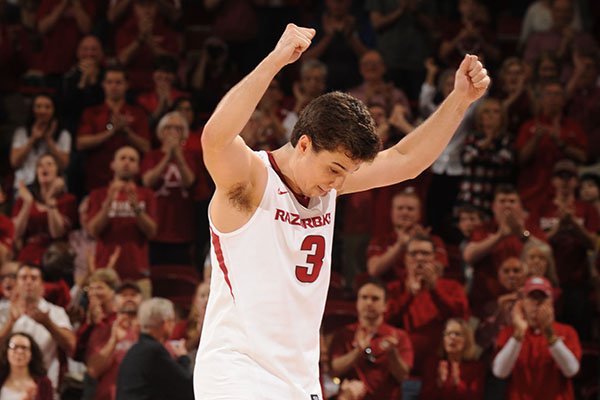 Arkansas guard Dusty Hannahs is applauded as he walks off the floor during a game against Georgia on Saturday, March 4, 2017, at Bud Walton Arena in Fayetteville. Hannahs tied for a game-high 15 points in his final home game for the Razorbacks.

FAYETTEVILLE — This is the fifth of a 12-part series reviewing the 2016-17 season for each of Arkansas’ scholarship players.

— One of the SEC’s elite scorers. Two-year scoring average at Arkansas (15.4) ranks just outside the top 10 in school history. Versatile offensive player able to score from anywhere on the court. As a senior, had 12 games of 17 or more points and 4 of 20 or more. Could heat up and go on game-altering scoring spurts, pouring in several quick buckets over the span of a few possessions. Scoring average dropped from 16.5 as a junior to 14.5 as a senior, but his per-40 average didn’t change much (dropped from 24.4 to 23.3), a reflection of his usage rate climbing slightly from 26.5 to 27 even with a more-balanced roster around him.

— His shooting made life easier for him and his teammates, forcing opponents guarding him to stay attached and thus opening up the floor for the rest of the offense. Arkansas averaged an explosive 115.8 points per 100 possessions with him on the floor. Dropped from 43.3 percent from 3 to 38.7, but the latter still ranked fourth in the SEC and is a great number for a volume shooter who commands as much defensive attention as Hannahs does. Made multiple 3-pointers in 24 games and had 3 or more in 12. Great form.

— Compact shot and quick release allowed him to get attempts off with defenders in his grill. Defenses are always aware of his location and wary of helping off of him, but he still ranked in the 88th percentile nationally by shooting 42.7 percent on catch-and-shoot jumpers, according to Synergy Sports, good for an excellent 1.273 points per possession.

— Excellent feel for reading the defense coming off pindown screens and either curling and meeting the pass if he had a defender on his hip, cutting straight to the wing if he had an opening to potentially get a shot off or fading to the corner if the defender shot the gap. Averaged 0.989 points per possession and ranked in the 64th percentile coming off screens.

— Dangerous working off of ball screens because of his ability to take advantage of misplays and rise up for a jumper or leverage the screen and fear of his shot into a driving lane. Averaged 1.015 points per possession as a pick-and-roll ballhandler, which ranked in the 93rd percentile nationally.

— Shot an impressive 41.7 percent on isolations and averaged 1 point per possession, which ranked in the 86th percentile. Had an arsenal of head feints, ball fakes and other trickery that allowed him to get defenders off balance and generate separation. Shot an incredible 50.7 percent on runners as a junior, ranking in the 92nd percentile.

— Average finishing around the rim (52.2 percent, 43rd percentile), but his runner was an elite weapon he shot 44.8 percent on and ranked in the 88th percentile with. Could release it at different points and adjust in mid-air while still making it at a high rate.

— Led the SEC in free throw percentage, making 90.8 percent of his foul shots.

— A scorer first and foremost whose 9.6 assist rate ranked last among the 5 rotation guards and seventh among the 9 regular rotation players. His role was to put the ball in the basket. But when he did decide to pass, he was very good at it. Threw pinpoint dimes on tough attempts, including displaying a good feel for hitting bigs on pick-and-rolls or pick-and-pops on occasion.

— Competitor who played with fire, something that came out in different ways, whether it was directed at an opponent he hit a shot against or toward Mike Anderson, imploring his coach to allow him to stay on the floor.

— Prone to taking tough, contested shots. By definition a weakness, but tough Hannahs shots seemed to generally wind up with good results more often than bad.

— Struggled against some longer, upper-echelon teams. Shot a combined 16 of 49 (32.7 percent) from the floor and 5 of 20 (25 percent) from 3 in 5 games against North Carolina, Kentucky and Florida.

— Had 43 assists to 60 turnovers, not a good ratio but not necessary given his role and the aggressiveness with which he needed to look for his shot.

— Arkansas allowed 111.3 points per 100 possessions with him on the court, the worst defensive rating on the team. Improved as a defender both in ability and effort, but still below average on that end.

— Had trouble staying with quicker guards off the bounce. Ranked in the 41st percentile as an isolation defender.

— Struggled to fight over or through screens, grading in just 28th percentile at defending pick-and-roll ballhandlers and the 8th percentile defending off screens. Offenses shot 49 percent in both scenarios combined.

Hannahs put together one of the best two-year scoring runs in Arkansas history, endearing himself to fans and making him a marked man across the SEC. He could do it all on the offensive end of the court. His numbers were highly impressive, but the impact his mere presence on the floor had on the defense can’t be undersold. He was an incredibly valuable piece who will be difficult to replace next season.

Hannahs isn’t on draft boards, but it wouldn’t be a surprise if he is able to play in the NBA’s Summer League, an opportunity to prove himself and potentially earn a training-camp invite or pave the way for other opportunities.