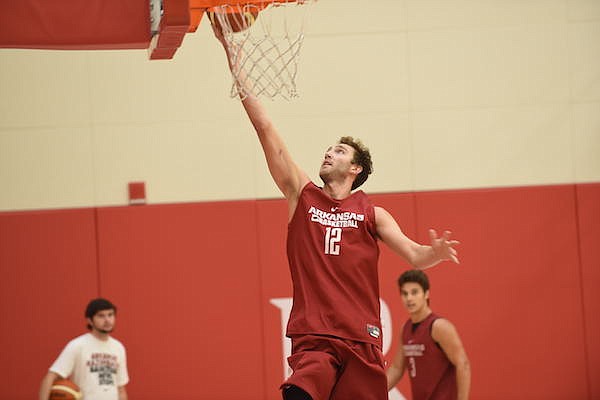 FAYETTEVILLE — This is the sixth of a 12-part series reviewing the 2016-17 season for each of Arkansas’ scholarship players.

— Almost nonexistent sample size for his freshman year given his role as the 12th man who only played late in out-of-reach games, but his biggest strength moving forward is a skill set that could lead to him developing into a stretch 4. He showcased this during practice leading up to the team’s August trip to Spain.

— Has a good shot and could develop into a floor spacer at the 4 if he improves. Probably the most likely big on the roster to develop into a perimeter threat. Continuing to improve as a shooter and further separating himself as the best among the bigs would go a long way toward earning him minutes.

— Has a knack for rebounding. Tracks the ball well off the rim, squeezes through tight spaces to get position and uses an above-average vertical to snare boards.

— Can finish above the rim thanks to his hops.

— Needs to continue to add strength in order to be able to play in the paint as required. Gained 16 pounds, going from 189 to 205, since arriving on campus.

— Tended to get in trouble when he tried to put the ball on the floor in August. Ballhandling ability has likely improved since then and it’s important he continues to progress in that area given that he will need to be able to confidently and effectively attack closeouts if he can establish himself as a shooting threat.

Hazen has a unique and valuable skillset no other big on the roster possesses, but faces a logjam for playing time at the 4, with Dustin Thomas and Arlando Cook presumably returning next year as seniors, fellow freshman Adrio Bailey possessing perhaps the most potential of the bunch, Trey Thompson able to slide over to the 4 and high-flying incoming freshman Darious Hall a good bet to compete for playing time.

Hazen will need to improve his all-around game while continuing to develop physically in order to have a chance at cracking the rotation. He was relegated to garbage-time minutes as a freshman and will need to make a jump to have a bigger role moving forward.