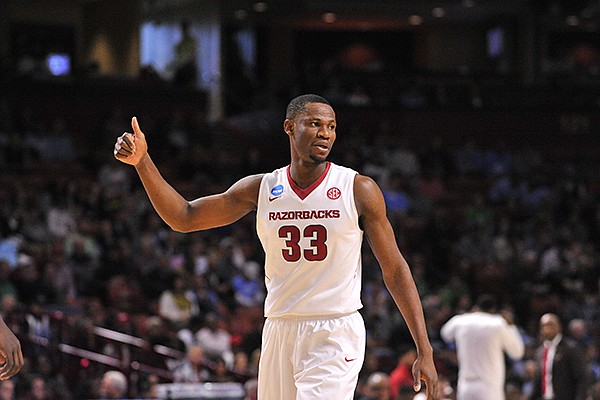 FAYETTEVILLE — This is the eighth of a 12-part series reviewing the 2016-17 season for each of Arkansas’ scholarship players.

— One of the best shot blockers in school history. His 93 blocks as a senior and 256 career rejections both rank third in school history. Led the SEC in blocks this season after finishing second as a junior. Had 11 games of 4 or more blocks as a senior. A menace for opposing offenses thanks to his athleticism, 7-3 wingspan and timing. His rim protection was vital for a team that didn’t consistently get good perimeter defense from its guards. Beyond the blocks, his presence served as a deterrent to some opponents, while his ability as a weakside help defender allowed him to alter countless other shots.

— Struggled at times to create his own offense, but was still a good finisher around the basket when set up by teammates. Had the athleticism to generally finish well in the paint. His field goal percentage dropped from a fantastic 54.8 percent as a junior to a below-average 46.7 percent as a senior, but he had to create his own shot more often this season as a result of different personnel surrounding him. He was actually better finishing around the rim on non-post up possessions as a senior, shooting 56.3 percent compared to 55.6 percent his junior year, according to Synergy Sports. The difference: He averaged 4.2 non-post up shots per game around the rim as a junior, but just 2.4 as a senior. Not having Jabril Durham to set him up made a big difference.

— Jumper came and went, but he was a threat to knock down the mid-range shot and even added 3-point range to his game. His ability to pass as a jump shooter added another dimension to his game and made him that much more difficult to guard. Shot 41 percent on jumpers, including knocking down 7 of 16 3-pointers. Has a somewhat flat shot and didn’t always get great lift, but could get hot. Also was able to pump fake, attack a closeout and put the ball on the floor one or two times to get into the paint for a good look.

— Used athleticism and stamina to be a factor running the court. Averaged 1.6 transition possessions per game and shot 63.2 percent on the break while drawing fouls 30 percent of the time. His 1.228 points per possession in transition put him in the 80th percentile nationally.

— Could be a very good passer from the low block. Made steady improvement in this area and averaged a career-best 1.9 assists per 40 minutes as a senior. Arkansas was at times able to successfully play inside-out through him, which mitigated some of his low-post struggles, to an extent. Arkansas averaged 0.962 points per possession when Kingsley passed out of post-ups, better than the 0.914 the Hogs averaged overall in the halfcourt.

— Morphed into a very good free throw shooter for a big man, hitting 75.7 percent of his foul shots as a senior after combining to shoot 63.7 percent his first 3 years.

— An anchor for the defense. Arkansas allowed just 98.6 points per 100 possessions when he was on the court, nearly 5 points less than the team average.

— Used quick hands to rip opposing guards several times when switched onto ballhandlers in the pick-and-roll.

— By far the best rebounder on the team. Averaged 7.7 per game and grabbed 15 percent of available rebounds while on the court, ninth in the SEC. Arkansas ranked 333rd out of 351 teams in defensive rebounding and would have been a disaster on the defensive glass. Pulled down a little more than 1 of every 5 available defensive rebounds (21 percent), which ranked seventh in the league. That’s a pretty incredible rate given how often he contested shots.

— Had a smaller offensive role than he did as a junior thanks to a more-balanced roster around him. Was visibly frustrated when he didn’t get touches at times, but did a commendable job not letting it affect his defensive effort.

— Played his best basketball of the season in March, stepping up for the stretch run. Had huge games against Ole Miss, Vanderbilt and Seton Hall, outplaying all-conference big men and controlling the paint as Arkansas earned big victories. It was an up-and-down, at-times-frustrating senior year, but Kingsley showed up in March.

— Kingsley post-ups were the least efficient regularly utilized part of Arkansas’ offense. Shot a very impressive 50 percent on post-ups as a junior, but just 39.8 percent as a senior. Kingsley finished 4.8 post-up possessions per game as a senior and Arkansas averaged just 0.763 points per possession on them. Post-ups are already generally inefficient by themselves anyway, but Kingsley ranked in just the 44th percentile nationally on them because of turnovers and missed shots.

— He was the subject of greater defensive attention, often being doubled on the touch in the post. He struggled to handle this at times, his turnover rate on post-ups jumping from 16.1 percent as a junior to 19.7 percent as a senior.

— At times, he struggled to establish deep post position and was unable to create it after receiving an entry pass. Other times, he simply failed to finish good looks around the rim. His jump hook His touches decreased as a whole, which may have led to him forcing it at times. He wasn’t the same threat with his back to the basket as a senior. Didn’t have a reliable go-to move. Shot just 25 percent on hook shots. Was far better against single coverage on the right block (shot 44 percent) than the left (36.5), but had about the same amount of possessions on the right (70) as the left (55).

— Appeared disengaged on the offensive end at times, floating around the perimeter and not moving with great purpose. Likely the result of playing with ball-dominant guards.

— Possessed enough quickness to hang with most guards off the dribble, but tended to gamble for steals most of the time he was switched onto guards on the perimeter. Quick hands allowed him to pick some pockets, impressive for a big, but he often was left out of position after lurching for steals and coming up empty, leaving the defense compromised and effectively playing 4 on 3 without its rim protector in the picture. This became an issue at times because he had a tendency to invite and accept switches rather than hedge and recover or drop back and ice ball screens. Switching to a zone served to keep him planted in the paint more often later in the year, which helped.

— Hunting blocks took him out of the picture on the defensive glass at times, an issue because Arkansas was so bad at keeping teams from killing it with offensive boards. But Kingsley faced a catch-22. Opposing guards routinely got to the rim, so he had to challenge shots, which then opened the door for opposing bigs to put back misses he helped force.

— Not great taking away the roll man on ball screens, not a huge surprise given Arkansas’ issues with the action most of the year.

— Despite his abilities as a rim protector, his one-on-one post defense was average. Sturdy bigs were able to carve out space while a few athletic bigs could score over him. Opposing bigs shot 45 percent on post-ups against him, which put his post defense in the 50th percentile. Not bad, to be sure, but not great, either.

Being named preseason SEC Player of the Year put undue pressure on Kingsley, conjuring expectations of a big-time low-post scorer who would anchor Arkansas on both sides of the ball. The roster makeup wasn’t going to allow for that to happen. The influx of Jaylen Barford and Daryl Macon was obviously a major plus for the team, but Kingsley’s offense suffered, both in raw numbers and in quality of looks.

But he was still a dominant rim protector and a superb rebounder. He raised his offensive game to another level in March, but his shot blocking and work on the glass never went anywhere. For those reasons, he was Arkansas’ most important player. He had a stellar career full of memorable moments. The frontcourt future is bright for Arkansas, but Kingsley will not be easy to replace.

He does not appear to be on the draft radar at the moment, falling outside the top 100 prospects for both DraftExpress and ESPN. Whether or not he is drafted, it seems likely he would get a chance to play in the NBA’s Summer League, where he could audition for a training camp invite. The D-League or overseas routes would obviously be open to him if he doesn’t make an NBA roster.