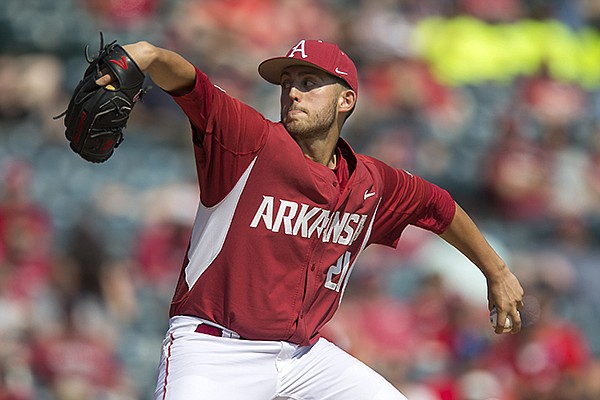 FAYETTEVILLE — There was much consternation over the last two years when the Arkansas baseball team fell short in left-handed pitching.

Among those with high baseball IQ, the questions I was asked most often when touring Baum Stadium during games concerned the need for more lefties. Here were a few of the regular questions:

“Why can't we get a few crafty lefties?”

“How many lefties are in the next recruiting class?”

“Does Dave Van Horn have something against left-handed people?”

OK, that last one wasn't really serious, but I did hear it. And there was a point to the question, that the Razorbacks needed more lefties on the baseball team.

Van Horn, the veteran coach, always has coveted lefties. But the key is that so do the MLB teams that draft high school lefties and pay them well. A lefty with a blazing fast ball has a slim chance to make a college campus.

You can recruit a ton of them, but that doesn't mean they make it to college. You have to over-sign and also look for a few that don't have a 90 mph fastball. Those juniors throwing 90 might be throwing 92 by the time they finish high school and they are going to be gobbled up by the draft.

Here is the key number: Only 10 percent of the world's population is a lefty. Some have suggested that about half of those are crazy. Doesn't everyone know at least one crazy left-hander?

I fly fish with two of them and it's always been tough to figure out where to stand when they ask for help on the river.

The Hogs seem to be fine on lefty pitching right now. Although there is not a lefty starter in the weekend rotation, pitching coach Wes Johnson has used several lefty hurlers this year. Evan Lee, Kacey Murphy, Weston Rogers and Matt Cronin all have made multiple appearances.

There are four left-handers redshirting. Senior Jordan Rodriguez pitched 25 times in relief last year, but failed to make the active roster this season.

“You must have (left-handers) and we do now,” Van Horn said in the fall. “We are able to do so many more things as far as situational changes now.”

That's not just on the mound. Van Horn has more options at the plate, too. As you might guess, the rest of college baseball has the same problem. They have staffs dominated by right-handed pitching. So what's the answer? You better have some lefty bats in the lineup and on the bench.

“We are better there, too,” Van Horn said this week. “We may have four or five left-handed hitters in our lineup every day. We can go heavier than that.

“You want to be able to build your lineup so that a situational pitcher is not going to see a hitter from the same side of the plate and be able to get through an inning.

“Now there are some pitchers who are able to handle it either way. You see that change-up that is the pitch a left-hander is going to throw to your right-handed hitters and that enables him to get through your lineup a couple of times.”

Among the newcomers playing every day who hit from the left side are shortstop Jax Biggers (.295 batting average, 2 HRs) and center fielder Dominic Fletcher (.272, 6 HRs). Chad Spanberger (.237, 4 HRs) is a lefty returnee. Eric Cole, another returning player, hits from both sides. Catcher Alex Gosser hits from the left side, but he's a backup to Grant Koch, one of the SEC's best power hitters and defenders.

The Hogs expect to get big things from another lefty newcomer, junior college transfer Jared Gates. He's battling back from hand surgery in January. He was among the team's best hitters in the fall.

Other lefty hitting newcomers are infielders Matt Burch, Hunter Wilson, Jack Kenley and Lee, a two-way player who is both a pitcher and a solid prospect at the plate.

“I think you are going to see Evan play every day next year and hit when he's pitching,” Van Horn said. “He's very mature for his age and talented as both a pitcher and hitter. He looks and acts like he's 25.”

The flexibility of the roster is one of the reasons the Hogs are off to 20-5 start, including 5-1 in the SEC as they head to Alabama this weekend.

“I think it's helped us,” Van Horn said. “We have options when we are making out the lineup. There are times you get the (analytics) and they tell you that you need more lefties (in the batting order) that day. We can do that.”

So when I'm strolling around Baum Stadium these days there's an easy answer when someone wants to know if Dave Van Horn has something against lefties.