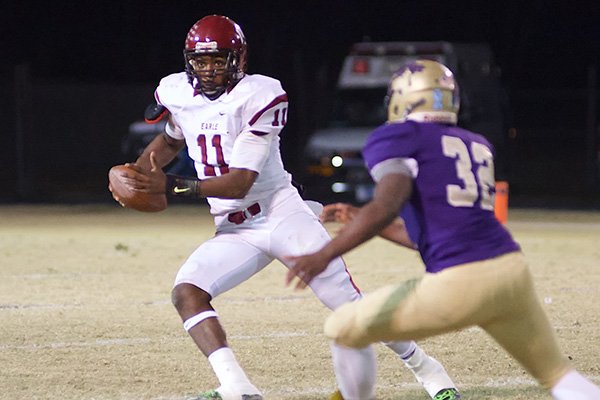 Arkansas appears to have made some inroads in the recruitment of quarterback Gerry Bohanon after hosting the Earle prospect Friday and Saturday.

“I can say the best part about the visit were talking with Coach Enos and Coach B,” Bohanon said. “The scrimmage was nice too, but I hate it rained because the spring game was going to be great. I enjoyed each and every minute spending time with the staff and just being on campus.”

Bohanon, 6-4, 215 pounds, has scholarship offers from Arkansas, Alabama, Georgia, LSU, Baylor, Auburn, Ole Miss, Mississippi State, Tennessee and others. He said the Hogs told him about the option to play quarterback.

“I have a shot at doing whatever I want,” Bohanon said. “If I win the job as quarterback, then I will be the starter.”

ESPN rates him the No. 7 dual-threat quarterback and the No. 117 overall prospect in the nation. Enos spoke about plans for him at quarterback.

“They have some things they're adding to the system that I do well,” Bohanon said.

“He really wants me to come and join him,” Bohanon said. “Competition at the position would only make us both better and also we both could make the team a lot better. He's a great dude. He recruits me very hard. He also mentioned he doesn't mind the U of A taking another quarterback.”

The trip to Fayetteville will likely be his last visit for about a month.

“I don't think I'm going to do anymore until June,” he said.