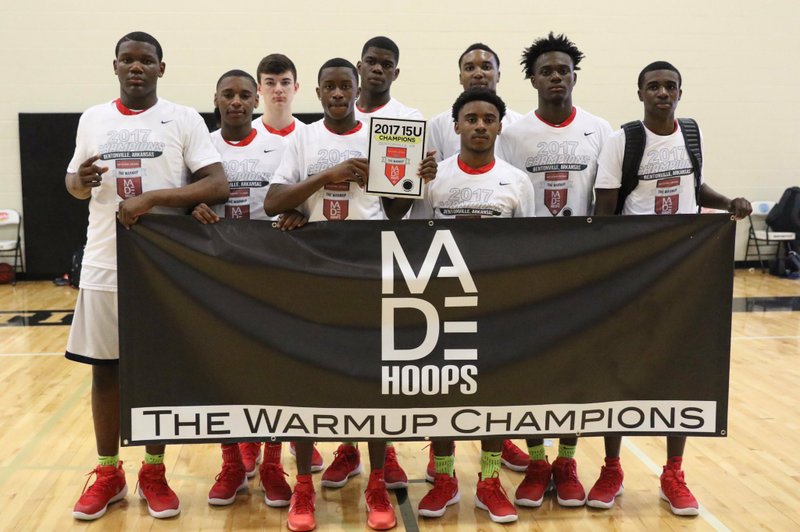 The 15-under Arkansas Wings Elite EYBL are undefeated and ranked No. 1 in the nation.

The 15-under Arkansas Wings Elite EYBL team is undefeated and ranked No. 1 in the nation by prephoops.com. College coaches are taking notice.

The Wings won their fourth straight championship in the spring with an 85-79 victory over Mac Irvin Fire EYBL at the Nike EYBL Session II in Indianapolis. They also won Real Deal in the Rock, Nike Made Hoops and King James Exposure.

Colleges liked what they saw, and Abilene Christian offered all four on Monday while London also received one from Southern Miss and Doakes was offered by Texas A&M.

“It really started after the game [Sunday] on the trip back to Arkansas,” Buchanan said. ”I started getting a lot of phone calls and text messages about the players.”

“A lot of schools have interest in him even though he’s just in the eighth grade,” Buchanan said. “They’re going to keep him on their radar and keep up with his progress. He’ll probably get offers as well — probably next year. Maybe the end of the summer.”

Moore also has offers from Memphis and Southern Miss. Doakes and Davis have offers from the Golden Eagles.

“Those kids are really hot,” Buchanan said. “All those guys were in double figures all weekend in something. Either rebounding, assists or points.”

College coaches usually focus their efforts on the 16-under and 17-under prospects, but the Wings had several coaches, including Arkansas associate head coach Melvin Watkins, who attended the Wings’ second game in pool play and the semifinals.

“Once we got out of pool play, I would say it was an average of five or six,” said Buchanan of the amount of coaches at games. “Of course, we had some come during pool play … about three or four.”

Moore, who has 24 consecutive double-doubles, had 12 points and 20 rebounds in the championship game.

“SMU called about him,” said Buchanan of Moore. “They’ll probably be offering in the next few days. Of course, Arkansas has interest. Texas A&M had a long conversation with me.”

“He’s also getting interest from Baylor and Arkansas as well and Memphis,” Buchanan said.

Davis had 18 points, 6 assists and 2 steals against Mac Irvin Fire. The Mustangs and Arkansas are also interested in Davis.

“Texas A&M also had a long conversation with me about him,” Buchanan said. “They just want to see a few more things on him. They want to see more of him when the live period comes back.”

London combined for 31 points and 20 rebounds in the semifinals and championship game.

“SMU has interest in him,” Buchanan said. “He performed very well. He also has interest from his hometown Memphis and UNLV is showing interest, too.”

The 17-under Arkansas Hawks have five Razorback commitments and are only the second spring and summer team to have five starters pledged to a high major program. Indiana was the first school to feature five committed members of an AAU team.

“You also have some big guys developing and in the long run as well," Buchana said.

Springdale Har-Ber guard Austin Garrett is also drawing interest and has a chance to be a major college prospect.

“He’s a 6-4 athletic kid, great defensive player and energy guy,” Buchanan said. “Once we get his offensive tools fixed, he’ll be a high major talent as well.”

Because most teams have players from several different cities and states, the Wings have struggled with practice time.

Despite the lack of team practice, the Wings have an average victory margin of more than 20 points a game.

“Coming into to Real Deal I didn’t know what to expect,” Buchanan said. “I knew individually the talent was there, but as far as team wise I just didn't know.”