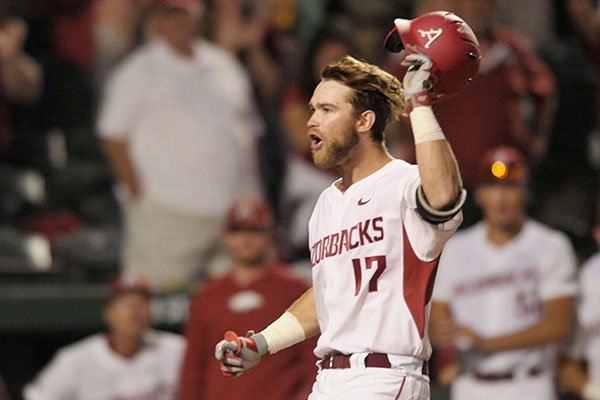 Luke Bonfield, Arkansas left fielder, runs the bases after hitting a home run Thursday, April 13, 2017, during the third inning against Georgia at Baum Stadium in Fayetteville.

FAYETTEVILLE -- Luke Bonfield is eager to play professional baseball, just like most of the rest of his teammates with the Arkansas Razorbacks.

But he's not in such a hurry that he feels he could turn his back on a coaching staff and a program that believed in him after his mighty struggles as a freshman.

Noteworthy Tied for third on the team with a .303 batting average, ranks second with 39 RBI, fifth with 7 home runs and leads the team with 7 catcher’s interference calls. … Only Razorback to start all 48 games, has started 35 in left field and 13 at designated hitter. … Arkansas has a 27-8 record with Bonfield in left and an 8-5 record with Bonfield as designated hitter. … Has batted in the 3 hole in 47 games and in the 2 hole in 1 game. … Batted .304 with 8 home runs and 39 RBI as a sophomore. … Hit .177 with 1 double and 7 RBI as a freshman.

Bonfield has passed on a couple of opportunities to start playing professionally and is anchored in the No. 3 spot in the Razorbacks' batting order with a .303 batting average, 7 home runs, 39 RBI and a .476 slugging percentage, as the No. 16 University of Arkansas, Fayetteville opens its final home series of the season Friday against Vanderbilt.

Bonfield turned down a hefty offer from the New York Mets, who picked him in the 21st round of the amateur draft in 2014 after he wrapped up his prep career at the IMG Academy in Bradenton, Fla. The outfielder was draft eligible again after his sophomore season, and he could have chosen to start his pro career after hitting .304 with a team-high eight home runs in 2016.

But the 6-3, 215-pounder set his asking price intentionally high and felt compelled to return this year for a couple of reasons, including the desire to help Arkansas bounce back from a 26-29 season.

He had another strong motivation.

"What a lot of people don't know is the coaches gave me my scholarship back my freshman year to my sophomore year because they believed in me, even though I had a really, really rough freshman year," Bonfield said. "So that was kind of in my mind, like they did that for me, I need to do something. And I wanted to come back for another year."

Bonfield, a native of Skillman, N.J., turned into a hot prospect after tearing up the field at the Perfect Game national camp in 2014, earning first-team Perfect Game All-America honors and a No. 57 national recruit ranking.

"I had like one offer before that [camp], and within a matter of weeks it was like every SEC school [made scholarship offers]," Bonfield said.

The Razorbacks signed him and Bonfield struggled as a freshman, with a .177 batting average, 1 extra-base hit and 7 RBI in 28 games.

But Arkansas Coach Dave Van Horn kept his scholarship commitment to Bonfield for the 2015-2016 school year and was rewarded for his confidence as Bonfield bounced back with a strong sophomore season. Van Horn said he appreciated Bonfield wanting to give the program another season in 2017.

"If they come in on scholarship and they don't have a good year, instead of feeling entitled, they feel like, 'Man, I've got to earn this. I've got to go out and prove that I'm better than that,' " Van Horn said. "If you get kids with that type of mentality, you're going to have a pretty good team."

Bonfield played a small role on Arkansas' College World Series team in 2015, started 48 games on the team that dipped last year and is the only player to start all 48 games for this year's team.

"Luke is just a consistent hitter that sees good pitches to hit, takes a lot of pitches he needs to take," Arkansas freshman outfielder Dominic Fletcher said. "He's really good at seeing the ball and is a consistent guy in the middle of the lineup that produces."

"In my opinion, he's the overall best hitter," shortstop Jax Biggers said. "He's the smartest hitter. Not the most pop, like Chad [Spanberger]. But as far as getting a hit when we need one, Bonfield's the guy I would go to."

Bonfield, who has been hitting better than .300 since March 22, referred to himself as steady.

"I just lead by example," he said. "I don't have the power that Chad might have, but I just staple that lineup. I get to protect him and just be a good baseball player. That's what it's all about, be a baseball player."

Bonfield said he worked to re-build his swing during the winter at a facility in Philadelphia, and the lessons he learned have helped lead to a strange statistic. Bonfield has reached base seven times on catcher's interference this season. No other Razorback has gotten on base due to interference, which occurs when the hitter's bat makes contact with the catcher's glove during his swing. Arkansas catcher Grant Koch has allowed only one runner all season because of it.

"So I can start my swing later than I feel some players do. That's why I think I get [the catcher's interference]. I start my swing so late, the catcher doesn't think I'm going to swing and kind of goes out to get the ball."

"He does this thing, it's called 'Rearward,' where you want to get in plane with the ball early," Fletcher said. "So when it's late in the count, usually he's trying to get on plane really early and catches the catcher's glove if they're a little too close. It's a good way to get on base."

"I guess it's part of the scouting report now," Bonfield said, laughing.

Bonfield's revamped swing has helped him cut down on strikeouts. He has 29 strikeouts in 185 at-bats through 48 games this season after striking out 41 times in 171 at-bats in 48 games last year.

Van Horn said he thinks Bonfield has followed up his big sophomore season with another good year, but he knows there's more in his left fielder's arsenal.

"I feel like he still hasn't hit his stride yet," Van Horn said. "We keep thinking he's going to turn it on. I hope it's this weekend. If not, I hope it's next weekend. Because there's more in there for him. There's more power. I think it's coming. I'm starting to see signs of it."