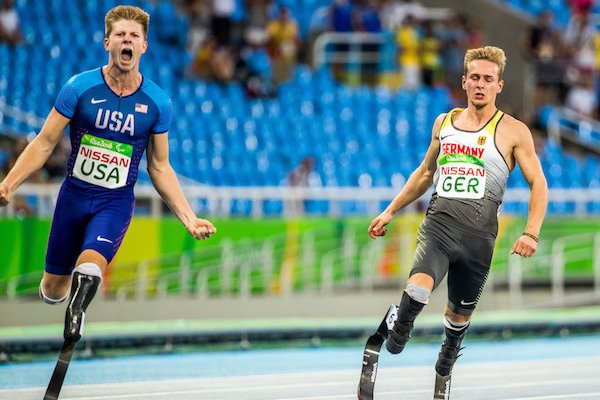 FAYETTEVILLE -- The first track and field athlete with prosthetic legs to sign with an NCAA Division I program will be running for the Arkansas Razorbacks.

Hunter Woodhall, a sprinter from Syracuse, Utah, signed with the University of Arkansas, Fayetteville earlier this month. He'll be a freshman during the 2018 season.

"Let's be frank: It is different," Arkansas Coach Chris Bucknam said of Woodhall's addition to the team. "But I've watched the kid run, his effort and how he goes about his business -- his passion to compete -- and I really like what I see.

"Then when he came here for an official visit, we got to know him and understand his goals and talk about running blades [prosthetic legs], we just felt like, 'This kid would be a great Razorback and can help us win conference and national championships.' "

"His times are impressive, period," Bucknam said. "We're obviously breaking some new ground here a little bit, but I think he's up to the challenge."

The NCAA allows athletes with prosthetic legs to compete in track and field.

In 2015, an NCAA committee overseeing the sport ruled athletes with prosthetics do not have an advantage over the rest of the field based on research by Alena Grabowski, a physiology assistant professor at the University of Colorado, which showed amputee athletes cannot push off the ground with as much force as able-bodied athletes.

"Our feeling is we just signed another good guy," Bucknam said. "We think he's an SEC-caliber sprinter."

After Woodhall won a silver medal in the 200 and a bronze medal in the 400 at the 2016 Summer Paralympics in Rio de Janeiro, he was approached by some apparel companies and an athletic technology company to see about sponsoring him after he graduated from high school.

Being sponsored would have made Woodhall ineligible to compete in college. Woodhall said he was determined to run for a Division I college team, not only for himself but for others with artificial limbs.

"There are plenty of guys who turn pro out of high school, but there's nobody that's ever done what we're doing right now in terms of breaking down some barriers," Woodhall said. "I think it's very important to change the perception of some people and show them what's possible and make them understand they can do amazing things.

"I feel that running in college -- especially for a school like Arkansas -- and what I can do for others is a little bit bigger than myself.

"Running for a college team has always been a dream of mine, too. I wasn't going to pass that up for a paycheck."

Woodhall was born with fibular hemimelia, a congenital bone deficiency that prevents both fibulas -- the calf bones -- to form.

After doctors told Woodhall's parents -- Barb and Steve -- he wouldn't be able to walk on two legs, the decision was made to amputate both limbs below the knee when he was 11 months old. He received his first prosthetic legs a few months later.

Unlike someone who lost a limb from an injury at an older age, using prosthetic legs is all Woodhall knows. He grew up playing football, basketball, baseball and soccer in addition to competing in wrestling and track and field.

"It's definitely natural to me," he said. "This is what I'm used to doing."

Earlier this year, Woodhall was asked to submit a bio for himself before a meet.

"In case you haven't noticed, I don't have legs," he wrote.

Woodhall said he likes to use humor to help people who may not be used to being around someone with artificial limbs.

"I love myself and I like to put myself out there, and I believe the differences we have make us very special. I want people to know I'm proud of myself and the fact I'm here and I'm doing this even without my legs."

Woodhall began concentrating on track as his only sport when he was a high school sophomore.

"My seventh- and eighth-grade year, I ran track for the junior high team, and I didn't even make the championship meet," he said. "I was really at the back of the pack.

"After that, I started training exclusively for track. That's when I started getting a lot better, because I was putting more hours into it. I learned a lot more about diet and rest. It all kind of came together."

Brian Berrong was Woodhall's track and field coach at Syracuse and also coached him in football when Woodhall played running back.

"If you knew Hunter's spirit and attitude, you got past the prosthetic issue really fast," Berrong said. "He just has such a great attitude and work ethic that it didn't even matter.

"For me, I wear glasses. I've got bad eyes. For Hunter, it's, 'My legs got amputated. I've got to use blades.' He's just an amazing young man."

Berrong became emotional talking about Woodhall's last race for Syracuse, when he anchored the 1,600 relay at the state meet.

Syracuse's time didn't count because of a disqualification in the exchange between the first and second legs after the baton was dropped and then tossed forward, but the runner on the third leg and Woodhall finished the race.

Berrong said Woodhall was about 50 meters behind the other runners when he got the baton, but he came within 3 meters of passing the winning team.

"Hunter probably ran a 44.9 or 45 flat split," Berrong said, his voice cracking. "He did everything he could. He passed every team but the front guy.

"If you saw that race, it spoke volumes about the effort that young man gives."

Woodhall said he never considered not finishing the relay.

"When I get a baton in my hand, I feel like it's up to me to bring it home for my team," he said. "Something takes hold of me.

"You're never going to catch me walking off the track without giving it my all."

Woodhall said BYU was the only scholarship offer he had from a Division I school by December, but in the spring more teams started showing interest.

Arkansas assistant coach Travis Geopfert said he got a call from Tracy Sundlun, manager for the U.S. men's Olympic team in 2016 and a longtime high school and college coach, who recommended recruiting Woodhall.

"Once we started looking at Hunter closely, it was really a pretty easy decision for us to go after him," Geopfert said. "He's a motivated young man that wants to be great, and he's run fast times.

"The beauty of our sport is, when you're fast, you're fast, and the kid is fast. So when we called him and he was interested, we wanted him to be a Razorback.

"We always ask in recruiting, 'Is this a young man that can come in and make a positive impact on our program?' The resounding answer was 'yes' from everyone about Hunter."

"It just goes to show our school is open-minded to anyone who participates and does well," Spearmon said. "I'll welcome him to Arkansas with open arms, and I'm excited to see what he can do in the future.

"He's showing a lot of courage. It's always more difficult when you're the first and you're developing the path and showing people what can be done. But what he accomplishes here will make it easier for the next person to have a road map to success.

"Having him run for Arkansas and being put on this stage is going to be really inspirational for a lot of people."

Berrong said he has no doubt Woodhall will succeed at Arkansas.

"Hunter's a great story with the challenges that he's overcome," Berrong said. "I think he'll be an amazing fit for Arkansas.

"He'll love the university and love the people of Arkansas, and likewise in return I think everyone there will come to love Hunter and appreciate all that he represents and how he carries himself. He's got a lot of heart."

Woodhall said it was humbling to get offers from Arkansas and Oregon.

"When you talk about track and field, they're the two most prestigious programs in the nation," Woodhall said. "It made for a very difficult decision.

"But I just decided Arkansas was the best place for me as an athlete and student and person in general. From the moment I got there on my recruiting visit, it was just a place I felt I belonged.

"On my other visits, I didn't feel the same energy I did at Arkansas."

Bucknam said Woodhall's decision to run in the SEC, which always is loaded in the sprints, shows he won't back down from a challenge.

"Hunter's really going into the belly of the beast when it comes to the SEC," Bucknam said. "It doesn't get anymore competitive than our conference, so that tells you something about the kid.

"He isn't shying away from the competition at all. He wants to see how good he can become, and we're here to help him do that."

Woodhall at a glance

COLLEGE Arkansas CLASS Freshman for 2017-2018 school year SPORT Track and field EVENTS 400, 200 and relays HOMETOWN Syracuse, Utah AGE 18 (born Feb. 2, 1999) HEIGHT 6-2 WEIGHT 160 pounds NOTEWORTHY Woodhall competes on two prosthetic legs also known as carbon-fiber blades. ... First track and field athlete with artificial legs to sign with an NCAA Division I program. ... Ranks seventh nationally in the 400 meters in the high school ranks this year with a time of 46.12 seconds, which also is a Utah record. ... Also holds Utah record in the 200 at 21.17. ... A seven-time Utah Class 5A state champion. ... Won a silver medal in the 200 and a bronze in the 400 at the 2016 Paralympics in Rio de Janeiro and silver in the 400 and bronze in the 200 at the 2015 Paralympic World Championships. ... Serves as an ambassador for Shriners Hospital for Children. ... Plans to major in business marketing at Arkansas and minor in communications. ... Parents are Barb and Steve Woodhall. ... Chose Arkansas over scholarship offers from Oregon, BYU, North Carolina and Long Beach State.