Neighbors looks to put his unique stamp on Arkansas basketball 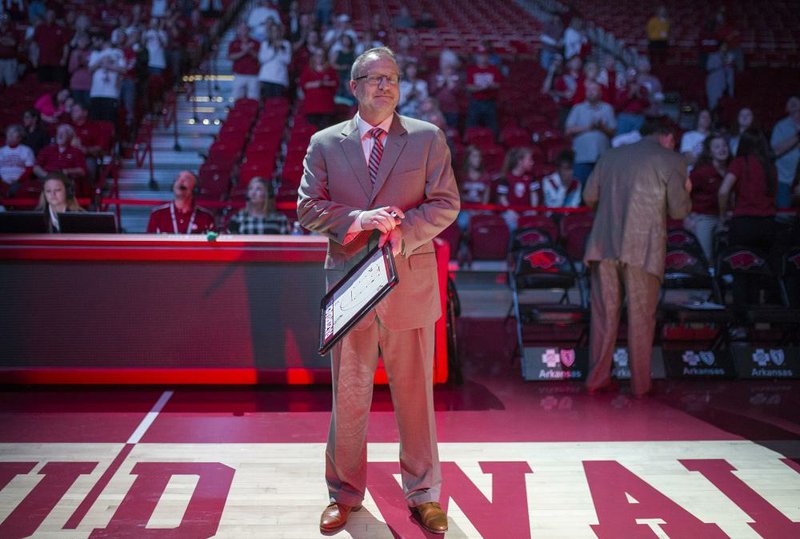 FAYETTEVILLE -- Arkansas women's basketball players and coaches lined up quietly at halfcourt and walked slowly together, collecting their thoughts prior to the start of practice at Bud Walton Arena.

"Everybody's like, 'Well I want to get behind you,' I said 'Don't get behind us, get beside us,'" the folksy Neighbors said. "Don't get too far out in front, which being a native Arkansan sometimes I'm guilty of doing. Let's just stay side-by-side together.

"And that's a perfect visual every day. That everybody's that's at practice that day that's a part of us, that travels with us on a road trip, they are going to be in there side-by-side. The girls tend to stay in the same spots, but I'll go between people now and then. We'll do it before every game."

The Razorbacks struggled a year ago, finishing last (2-14) in the Southeastern Conference and closing the season on an 11-game losing streak under former coch Jimmy Dykes. But players have adjusted quickly to the Greenwood native Neighbor's communication style and laid-back personality.

"He's very straight-up with us, tells us what's on his mind and what we need to do get better and where he sees us at," Junior Keiryn Swenson said. "The communication level between us this year, the coaches and the players is great."

Senior Devin Cosper, who will play her third season at Arkansas after transferring from Coffeyville (Kan.) Community College, said the fact Neighbors has children at or near the age of his players fills any communication gap.

"He's up-to-date on everything that's going on," Cosper said. "So we relate to that and so it's easier for us to relate to him."

Neighbors is a numbers guy. He believes in charting groups to determine the most effective. His staff has begun charting some of those things in practice already. And he stresses, the numbers don't lie.

"I love analytics," he said. "I use them as a tool, not the only tool. A lot of people think you have to have a lot of algorithms and all this fancy stuff. It's just simple math. What's the score when you're in the game?

"What I can tell you is we'll always have five out there that play well together. And sometimes it's not you're quote, best five. I think that's where a lot of people are dismissive of analytics. They don't want to see the numbers, because they're wrong."

He also acknowledged the numbers proved him wrong early on.

"When we really got to believe in it would be when I thought I knew who our best five were and I looked at the numbers and I could not have been more drastically wrong," Neighbors said. "It was a little ego-blasting.

"The kids realize when I'm in the game, I don't need to score but my team needs to score. And if all of a sudden, the kid shows up in the top six lineups, probably should play that kid the bulk of the minutes. It's how we ended up having a kid that was a walk-on at Washington start for us in the Final Four."

Neither Neighbors nor any of his staff had an answer why Alexus Atchley showed up in every one of their top lineups. But again, the numbers didn't lie that the team performed better with her on the floor.

"You start watching and you realize the ball moved a little bit better," Neighbors said. "She didn't take bad shots. The next thing you know those lineups start getting better, so you reward her with playing time."

Neighbors also brings a more up-tempo offensive style with him from Washington, where he led the Huskies to four consecutive postseason appearances, including one Final Four. It's something he'll utilize with the Razorbacks, too.

"It's the way we've played in the past," Neighbors said. "It's the way I want to continue to play here and obviously we're going to do what's best for our current team, but we're also going to get our blueprint started and part of that blueprint is getting the number of possessions per game up."

He combines the fast-paced offense with a pack line man-to-man defense. And Neighbors doesn't want to hear anyone call the pack line soft.

"Sagging man-to-man, I hear that all the time," Neighbors said. "Nothing soft about it. Try to play it for a while. It takes five people playing together, understanding each other and having a lot of practice at it. It will be a continued work in progress."

Neighbors' defense is more about contest and contain. He's looking for a lower field goal percentage for the opponent and good rebounding from his team.

"With our lack lack of size, we have to play together as a pack of five," Neighbors said. "If we count on individual defense, we're gonna struggle with that in this league. We play as a pack."

Swenson, who played in all 30 games and averaged 8 points per game a year ago, said Neighbors has made learning fun.

"He doesn't necessarily punish us," Swenson said. "He wants us to make mistakes so we can learn from those mistakes and encourage us to get better. In the process, we're laughing in practice. We're having a lot of fun, but we're also learning and improving at the same time."