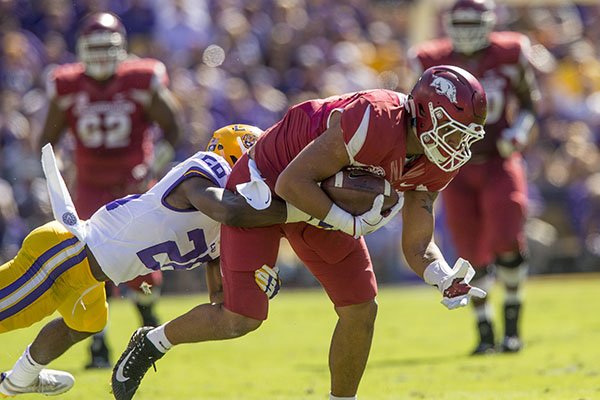 "And you have to understand they do a good job with their screen game as well as their boots [bootlegs], and you have to be able to defend it."

Tight end Will Gragg took a screen pass 33 yards against LSU last week and tailback Devwah Whaley had a 20-yard screen play to get the Hogs out from their 11 early in the game.

The previous week, tailback T.J. Hammonds took his first catch of the season 60 yards for a touchdown on a screen pass over the left edge against Coastal Carolina.

The University of Arkansas, Fayetteville has lacked deep-play connections in recent games, but screen passes have helped make up for it.

"We've been very good at our screen," Arkansas tight ends coach Barry Lunney Jr. said. "I think Dan does a great job of being creative in different ways. Those have been very effective for us in creating explosive plays.

"It doesn't matter how far the ball goes in the air, it's about the results. That's been something that's helped us compensate."

Additionally, Grantham pointed out how Mississippi State's young linebackers have to be wary for the mis-direction plays called by Arkansas offensive coordinator Dan Enos.

"You're thinking the ball is going to stay to the right ,and all of a sudden it's coming back to the left, based on what the initial flow is telling you," he said. "And you've got to be able to put your foot in the ground and come back.

"So it's a discipline thing, it's an eye thing. It is an experience thing I think, too, as you get comfortable."

Arkansas senior quarterback Austin Allen did not attend Tuesday interviews this week for the first time when healthy all season. Allen missed one media opportunity all of last season.

Arkansas Coach Bret Bielema pointed out that Allen met with members of the media after the Hogs' 33-10 loss at LSU last Saturday.

"He's never a guy who shies away from it," Bielema said. "But I just felt for him to get where he needed to be Saturday -- we knew Cole [Kelley] wasn't going to be playing. Everybody knows all the answers around the QB situation, and he, more than anybody, has risen to the occasion and talked to the media on every opportunity.

"I just wanted him to concentrate on playing good football and have a great practice and be ready to get out there."

"They've got an offensive line that, in my opinion, is one of the better O-lines that we've seen this year and overall probably a better O-line than we've seen in the past from Mississippi State," Arkansas Coach Bret Bielema said. "They're very big, very talented. Every one of them, from left tackle to right tackle, is a high-quality SEC lineman."

"They're athletic. They're big," he said. "They're going to be one of the bigger lines we've faced. And they're strong. That's going to be an issue.

"We're going to have to do a really good job of trying to hold on and knock those guys back a little if we can. They did a great job last week."

"He's coming around," Lunney said. "I think he's coming around with his conditioning getting better. ... If there was an area when he got here that he was more behind in, it would have been in the passing game. So the running game was a little bit more of an easier transition for him."

Patton had a team-high four catches for 44 yards at LSU last week. In the past two games, Patton has seven receptions for 93 yards, and for the season he has nine catches for 146 yards.

The Mississippi State press release this week touts that the Bulldogs have broken 112 individual and team, single-season and career records in Coach Dan Mullen's nine seasons.

"When you look at the guy that replaced at center, I think he's done a really good job of getting movement at the point of attack," Grantham said. "I think their offensive line has got really good size and they do a solid job. So we know it's going to be a challenge."

The CBS broadcast team Saturday will consist of Aaron Taylor and Rick Neuheisel as color analysts, Carter Blackburn on play by play and John Schriffen as the sideline reporter.

Blackburn and Taylor called the Razorbacks' 53-52 overtime victory at Ole Miss in 2015.

Mississippi State will be appearing on CBS for the first time since falling 31-6 at home to Alabama on Nov. 14, 2015.

• Arkansas tailback Devwah Whaley has scored a touchdown in four consecutive games, three on the ground and one on a pass reception.

• Mississippi State became the first team to score three rushing touchdowns in a game against a Nick Saban team at Alabama last week.