'Psycho' baseball strength coach got his start in NASCAR 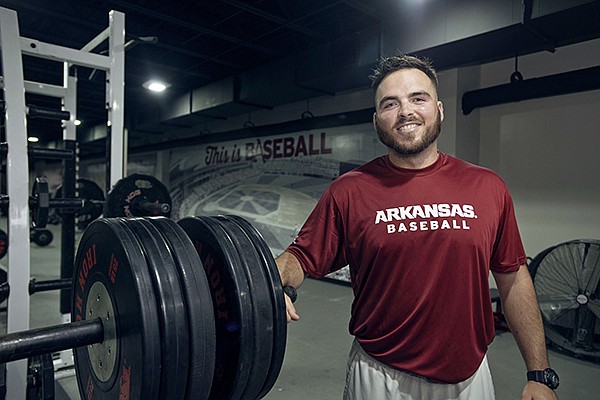 FAYETTEVILLE — Before he got his start training baseball players, Blaine Kinsley cut his teeth in sports training by working out NASCAR pit crews.

As an assistant strength coach for Hendrick Motorsports in Charlotte, N.C., Kinsley was responsible for keeping in shape the jackman, the gas man and all the other men on the teams of Jimmie Johnson, Jeff Gordon, Dale Earnhardt Jr. and Mark Martin. If you think that doesn’t sound like training real athletes, think again.

“They’ve gotten to the point to where they’ll go to the NFL and take people that get cut from practice teams,” Kinsley said. “The jackman for Mark Martin’s team at the time was a guy named Aaron Walker, who was a football player at Florida. He was a big tight end, which is what they want for a jackman - strong and quick and can move.

“They like going after ex-athletes, especially baseball and football. The caliber of the athlete has changed a lot.”

Kinsley said he enjoyed his NASCAR experience, but his true love was baseball. He was a setup man out of the bullpen at Lenoir-Rhyne, an NCAA Division II program in his home state of North Carolina, where he also played offensive line on the football team for two seasons.

Several pitstops later he finds himself in a spacious, mostly empty room that could only be described as the prototypical office for a strength coach, complete with a full-length mirror, a refrigerator and two-and-a-half empty shaker bottles on an old oak desk that, minus a computer monitor, is otherwise empty.

It’s there, adjacent to the loading dock at Randal Tyson Track Center, that Kinsley can look out over his domain, about a dozen or so machines and benches where his newest bunch of athletes from the Arkansas baseball team work out. He was hired this summer to replace Mike Strouhal, who left after 14 seasons to work for a private training company.

Kinsley had spent the previous 10 months with the St. Louis Cardinals’ Double-A affiliate in Springfield, Mo., and also had a chance to work with the big league team at spring training in Jupiter, Fla. Before that he was a strength coach at East Carolina after a two-year stint with the Chicago Cubs’ minor league teams.

“I remember the day when Soler signed,” Kinsley said. “That was a big deal.” 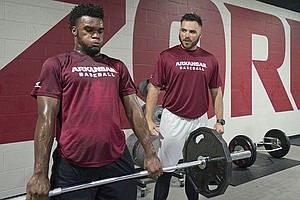 Arkansas coach Dave Van Horn cited Kinsley’s work with professional baseball as one reason he hired him to replace Strouhal this summer.

“We wanted to get someone who had experience in baseball at the highest level as far as collegiately, and the professional experience is great,” Van Horn said. “He’s kind of someone who has been there and done that.

“When this job came open he jumped at the opportunity to come here. I know the players have really taken to him.”

Kinsley’s emphasis on lower-body workouts has resulted in several notable weight gains this off-season. Infielder Hunter Wilson said he has gained 22 pounds and pitcher Blaine Knight is 172 pounds, which he said was “definitely the heaviest” he has been in his life.

“Let me tell you, that guy is a psycho in the weight room,” said Luke Bonfield, a senior who had gained 7 pounds in his first three weeks with Kinsley. “He works us out harder than we’ve ever worked out before, to the point where you’re just pouring sweat.”

Kinsley laughs at the psycho reference, but does admit his demeanor changes when it comes time to workout. His soft-spoken voice is replaced by a whistle in the weight room.

“I like to coach hard,” Kinsley said. “I like guys playing hard and competing. Baseball, you have to compete every pitch and if you don’t, that one pitch you take off might be the difference in the game. I like energy, enthusiasm and spirit. When we come in here, we tell them to bring the energy, bring the enthusiasm. You’ve got to get up for it. You’ve got to have a spirit that you want to compete, you want to win and want to get better.

“The things we do in here are going to mimmick the competitive nature of the game.”

Kinsley, who turns 30 next week, calls his philosophy the “meat and potatoes” of weight-lifting, full of squats and presses. He isn’t a believer in lifting heavy weights overhead.

“I like explosive stuff…pretty old school,” Kinsley said. “The game is from the ground up, so we’re going to hammer our legs quite a bit. You talk to the guys and we like to bend, to squat, power cleans. If you can’t catch the clean…we make adjustments there.

“In everything we do we want the player to excel on the field. Whether you’re a power guy or a speed guy, you’re a finesse pitcher guy - the whole plan is to be individualized for you to meet your potential on the field. If it’s a 6-6 first baseman or a 5-10 shortstop, we really take pride in here and try to get the full potential that translates to the field and their role on the team.”

Kinsley’s workouts jive well with Arkansas pitching coach Wes Johnson, who is known for his emphasis on lower-body training to gain endurance and power. The Razorbacks set a program record for strikeouts in a season in 2017, Johnson’s first season on the job.

“I’ll be honest with you, Wes Johnson is the best pitching coach in America,” Kinsley said. “He’s going to develop guys and he’s going to get them strong. I can’t tell you how much of an outstanding situation it is for a strength coach to work with him.”

Kinsley was aware of Johnson prior to coming to Arkansas. With the Cardinals, Kinsley trained Dakota Hudson, who developed into a first-round draft pick after spending one season with Johnson at Mississippi State.

“What he learned from Coach Johnson at Mississippi State, he’s actually taken with him and he’s going to have success in the big leagues,” Kinsley said. “I’m very fortunate to work with him. We’re on the same page about everything. We want to get people strong and we want to get people tough when it comes down to make the 0-2 pitch.

“I know pitching coaches all around from college and pro ball, and he’s the best.”

Arkansas’ workouts begin as early as 6:30 some mornings. The conditioning is scheduled around other time demands such as class, tutoring and practice.

The workouts during fall practice are limited to about three times each week - low-volume sessions that take into consideration the work on the field that day or the day before.

Heavier workouts are reserved for the coming months of November, December and January. That’s also when big leaguers typically are hanging around the facility. Kinsley said he already has been contacted by some pro players about training with him in Fayetteville.