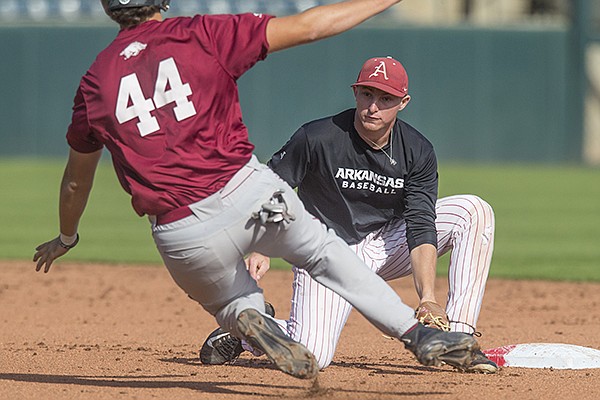 FAYETTEVILLE — Arkansas coach Dave Van Horn had a long talk with his team at the conclusion of the Razorbacks' Cardinal and Gray series Tuesday at Baum Stadium.

"We're going to Omaha - that was the main point of it," junior shortstop Jax Biggers said of his coach's speech. "If you're not on board, get off, and if you're on board then stay on board because we'll be in Omaha."

Van Horn indicated the final game of the series lacked the competitiveness he wanted to see from his team, projected to be a highly-ranked next preseason. The Gray won 6-0 in seven innings behind a strong start from Isaiah Campbell.

The Gray won the best-of-five series 3-1 despite losing the first game 13-0. In the final three games, the Gray outscored the Cardinal by a combined 24-2.

"The Gray team was the more confident team," Van Horn said. "They got it handed to them in Game 1 and put it behind them, and in the next three games just flat whipped the other team's rear.

"The other team didn't battle real hard to get out of that hole over there, in my opinion. I'm looking forward to (combining) the team up and putting the best players on one, and seeing what we can do come springtime."

Campbell struck out 5 and scattered 4 hits and 2 walks in his 5-inning start Tuesday. He worked around base runners in each of the first four innings, including runners on the corners with no outs in the third.

"Isaiah didn't have his best stuff today and still gave up zero runs," Biggers said. "When he's not on and gives up zero runs...that just shows how good he really is."

Campbell, a redshirt sophomore, figures to factor into the Razorbacks' starting rotation in 2018. The Olathe, Kan., native was projected to be a weekend starter last season but pitched only once because of bone spurs in his throwing elbow.

Campbell's velocity is lower than this time last year, in part because coaches have asked him not to throw as hard as he can this fall.

"He looks like he's just playing catch and it's still jumping in there 92, 94 (mph) pretty consistently," Van Horn said. "He popped a couple of 95s and that's where we wanted him this fall. He's done a good job of being mature about it and not trying to overthrow and pitch for a radar gun reading; he was just trying to get hitters out."

Campbell pitched with the lead from the second inning-on. Biggers doubled to leadoff the bottom of the first and scored the first of his three runs on a wild pitch by Cardinal starter Barrett Loseke.

Biggers and Jared Gates had consecutive RBI hits to extend the lead to 3-0 in the second inning, and Heston Kjerstad put the game away with a two-run single off freshman reliever Kole Ramage in the sixth.

Biggers played a key role in the Gray's series comeback. He finished the four-game series 7-for-17 with a home run, 4 doubles and 4 RBI. He also drew two walks and scored six times.

He was 3-for-4 Tuesday with two doubles.

"That's what I'm supposed to do in the leadoff spot," Biggers said.

Biggers has gained about 10 pounds of mostly lower-body weight after he skipped summer baseball to stay in Fayetteville and workout. The added strength was evident not only his home run in Game 3 Sunday, but also in his Game 4 doubles that landed in deep right field.

"The confidence is there because he has so much experience and had so much success last year," Van Horn said. "He's kind of been a tough luck hitter this fall as average, but he's hit as many balls hard as any of the guys. We're excited about him.

Loseke took the loss for the Cardinal by allowing 2 earned runs on 4 hits in 3 2/3 innings. The junior right-hander struck out three and walked one.

Sophomore left-hander Matt Cronin pitched two scoreless innings of relief for the Gray and struck out four of the seven batters he faced.