Freshman moves up in a hurry 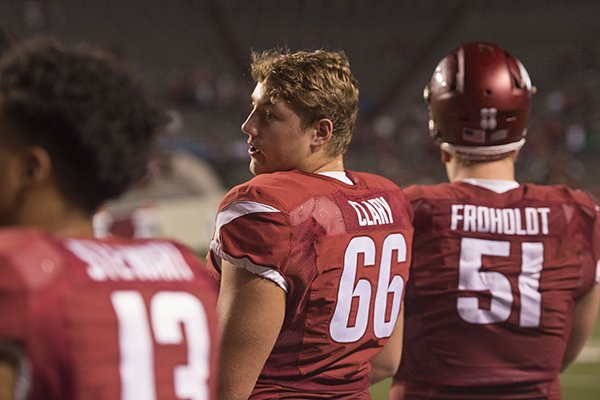 Arkansas offensive lineman Ty Clary stands on the sideline late during the Razorbacks' 49-7 win over Florida A&M on Thursday, Aug. 31, 2017, in Little Rock.

Clary is going into his third year as a starter for the hometown team. He's still at guard. He's continuing to play in a stadium close to Walton Arena.

In other ways Clary's football world has changed a lot.

Clary, who helped Fayetteville High School win back-to-back Class 7A state football championships as a starter the previous two seasons, is now starting for the Arkansas Razorbacks as a true freshman.

Instead of playing his games at Harmon Field, where the capacity is about 3,000, Clary will be in the lineup against No. 23 TCU today at Reynolds Razorback Stadium.

CBS will televise the game nationally and a sellout crowd in excess of 70,000 is expected.

"Ty's going to be fine," said Razorbacks senior center Frank Ragnow, a preseason first-team All-SEC pick. "He'll have to lean on me on the other guys a little bit, but nothing has seemed to be too big for him so far.

"Obviously, we haven't played on the biggest stages yet. I'm excited to see how he steps up to the challenge."

Clary, 6-4 and 286 pounds, was a surprise starter last week when the University of Arkansas, Fayetteville opened with a 49-7 victory over Florida A&M in Little Rock. He was listed at second-team right guard behind redshirt junior Johnny Gibson on the depth chart.

Clary worked with the first-team offensive line for several days leading into the game -- with Gibson as the starting right guard -- but Arkansas Coach Bret Bielema kept that under wraps.

"I didn't want it to be the chatter," Bielema said. "I wanted to protect him a little bit and let him prepare in a way that he needed to play."

Clary, who wasn't among the Razorbacks made available for interviews this week, graded at 91 percent against Florida A&M according to offensive line coach Kurt Anderson.

"He played extremely well," Anderson said. "But that's what he did the last two weeks of camp."

Clary came to Arkansas as a blueshirt, a term meaning he's a walk-on to start his college career, but will go on scholarship next semester.

"I'd like to prove that I'm worthy of a scholarship," Clary told the Arkansas Democrat-Gazette before the season. "I want to bring something to the team."

Anderson said Clary would have been offered a scholarship immediately, but the Razorbacks had a bigger need at tackle and signed Kirby Adcock, Shane Clenin and Dalton Wagner, who are expected to redshirt.

"I told Ty from Day 1 that if I had a guard position, you would be the first guard I offered in this country because of the way that he played," Anderson said. "I think that was part of the reason Ty came here."

Clary -- the Razorbacks' first true freshman offensive lineman to start his first game since Mitch Smothers in 2011 -- began training camp as a third-teamer, but by the second scrimmage he had moved up to the second team.

"He went out there against our No. 1 defense and was physical and assignment-sound and finishing and great in protection," Anderson said. "As the next two weeks progressed, he was able to put himself in position to where in my opinion it was clear he was a starting guard."

Tailback Devwah Whaley rushed for 12 yards on the Arkansas' first snap in the Florida A&M game.

"We ran a little (isolation) play right behind Ty and a guy tried to come across his face and he just buried him down, walled him off," Bielema said. "A pretty routine play, but it's not always routine for a newcomer, especially on the first snap of the game.

"Ty handled everything very, very well. He had maybe two mental errors or busts the entire game. He has feet as great as I've ever seen, great instincts and he's very intelligent."

Bielema said Clary has two things going for him against TCU.

"He already has one start under his belt and he's playing next to Frank Ragnow, who I think is one of the most intelligent players I've ever coached," Bielema said. "Frank's talking to him on every call. All he has to do is pay attention and block the right guy and good things will happen."

"He was composed in the huddle," Allen said. "He played his tail off. He got on the right guys. I think he's a really special player."

Ragnow said he expected Clary to play well in the opener, but he still was pleasantly surprised.

"He did amazing to be honest," Ragnow said. "He did pretty dang incredible.

"He's done a great job of just keeping his head down and working and figuring things out."