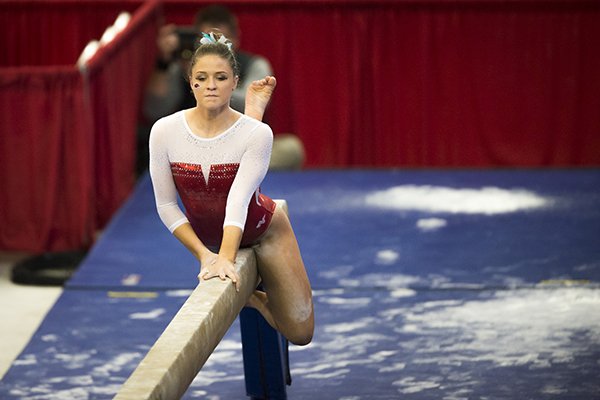 Arkansas gymnast Amanda Wellick performs on the beam during a meet against Georgia on Friday, Jan. 26, 2018, at Barnhill Arena in Fayetteville.

FAYETTEVILLE -- The torn Achilles tendon Amanda Wellick suffered early last season has taken a few of the most difficult elements out of the routines of the Arkansas Razorbacks' gymnast, but the three-time All-American is having a renaissance season anyway.

A big part of Wellick's rosy outlook has been the Razorbacks' performance this winter after a down year in 2017 without her. The University of Arkansas, Fayetteville will carry a No. 10 ranking and a two seed into today's NCAA Columbus (Ohio) Regional.

Arkansas will compete against No. 3 UCLA, No. 15 Boise State, No. 25 Ohio State, Pittsburgh and Kent State at the Buckeyes' St. John's Arena, with the top two teams advancing to the NCAA championships in two weeks.

The Razorbacks have bounced back in Wellick's senior year, breaking the school scoring record with a 197.3, drawing big crowds to Barnhill Arena and winning their session at the SEC championships. The next step is to earn a spot in the NCAA championships for the first time since 2013.

"This season has been wonderful, quite honestly," Wellick said. "We've broken so many records as a team, and just to be a part of that -- I always think everything happens for a reason -- and just to be able to experience this and be one of the top seeds going into a regional and being more confident going into it instead of being the underdog ... it feels really good."

Wellick had been held out of the floor exercise, her favorite event, for the first seven meets of the season to reduce the stress on her Achilles. But she got back on the floor Feb. 23 against Florida and has been an all-around performer the past five meets, joining sophomores Hailey Garner and Jessica Yamzon, and freshman Sarah Shaffer on all four events.

"Being back in the all-around feels more natural to me," said Wellick, who has scored 9.8 or better in 78 percent of her routines this season. "Not being in it and having that momentary break was weird."

"She's up there," Cook said. "I mean, she's been a consistent athlete for four years. She's just been a really steady competitor on all the events.

"To come back mentally and physically and do a fifth year like she's done is really unbelievable."

Wellick and senior Braie Speed, a top 30 performer on the vault and uneven bars, have provided leadership for a team ripe with young talent, such as Garner, Yamzon, Shaffer, sophomore Michaela Burton, and freshmen Sophia Carter and Sydney Laird.

"We're a pretty young team when you look at it," Wellick said. "The freshman contribution and really the sophomore contribution ... we couldn't be doing it without them. I can't wait to watch the future of this program, because they've come in with a lot of grit and a lot of heart and going after what they want. It's going to be remarkable for the program."

Wellick is in line to watch the Hogs' future. A graduate last May with a marketing degree, she is scheduled to work as a manager with the Razorbacks next season while pursuing her master's degree in sports management.

The Razorbacks are in a good place mentally and physically right now, Wellick said.

"We're feeling pretty confident," she said. "We just came off SECs, which was one of our top finishes in the history of the program. It was an away meet, so it was a good feel for how regionals will be, because it's a loud environment, a lot of things going on, distractions can happen. We're just going to build off of that going into regionals."

Wellick has the scar and another memento near the scar on the inside of her right ankle as a reminder of Jan. 13, 2017, when her Achilles popped during pre-meet warmups on the floor.

While the 5-6 Wellick was rehabbing her injury she looked up inspirational ideas and found the quote, "Knock down seven, stand up eight." She convinced the team to take it as its theme. She printed it out and posted it on the locker doors of her teammates, then took it a step further.

"A bunch of us actually got a tattoo of that, which I don't think a lot of people are aware of, just because last year was very impactful on our lives, not only in gymnastics, but it also taught us a huge life lesson," Wellick said.