Back in the big show: UA gymnastics team welcomes another trip to nationals 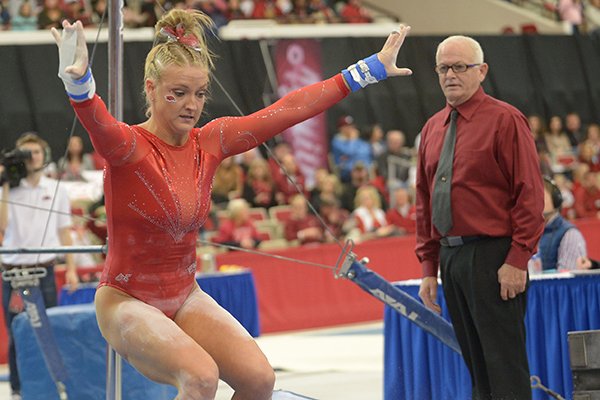 The NCAA championships at the same arena today will resemble an SEC invitational as a record six league teams will compete for the crown.

What The top 12 teams in the nation will compete in two sessions today, with the top three from each session vying for the NCAA title on Saturday

The No. 10 Arkansas Razorbacks, in their first appearance at nationals since 2013, will join SEC champion and No. 2 LSU, No. 4 Florida, No. 6 Alabama, No. 8 Kentucky and No. 12 Georgia in the 12-team field. The University of Arkansas, Fayetteville will compete in today's noon session along with LSU, No. 3 UCLA, Alabama, No. 7 Nebraska and Georgia with an eye on the program's third appearance in the Super Six finals.

The Razorbacks are ending a four-year NCAA championships drought, the longest since Mark Cook co-founded the program in 2003.

"It's really nice to get back to the big show, on that stage," said Cook, who has led Arkansas to eight NCAA finals appearances in his 16 seasons.

Arkansas will rotate with individual qualifier Lauren Bridgens of Penn State and start with a bye before moving to the floor exercise, vault, bye, uneven bars and concluding on its strongest event, the balance beam.

Amanda Wellick and Braie Speed are the senior leaders for the Razorbacks, a team for which 18 of 24 routines will be performed by freshmen or sophomores. The seniors have been to nationals as individuals but never as part of a team.

"It means the world to me," said Wellick, who competed as an individual all-arounder at the NCAAs in 2014 and 2016. "I've been there two times myself and I wish nothing more than to have my teammates by my side."

Speed tied for 13th on the vault at last year's NCAAs.

"I'm very happy and just very blessed that I get to end my career with Amanda at nationals, and for the rest of the team, we're just really happy, really excited," Speed said.

"This program deserves it, the coaches deserve it and the gymnasts deserve it. We've been through a lot, especially from last year with the injuries and the adversity that we faced."

Arkansas has 40 event scores of 49 or better this season, more than doubling its 18 such scores last year.

Sophomores Jessica Yamzon and Hailey Garner and freshman Sarah Shaffer are likely to join Wellick in the all-around. Freshman Sophia Carter is expected to go up on three events, while Speed and sophomore Michaela Burton project on two events each. Freshman Sydney Laird will be on the bars and might get the call on the beam, while senior Mia Bargiacchi could see the floor exercise.

Cook said the key to advancing to the Super Six is for the athletes to stay relaxed and focused on their jobs.

"We just need to be clean," Cook said. "It's all about the landings, and just being sharp and being relaxed.

"If you get too tense, you start changing things, and gymnastics is like taking a putt. If you get tense, you can pull it or push it. Same thing in gymnastics. We've just got to keep our minds relaxed, we've got to be aggressive, have fun and be clean."

Winning an NCAA gymnastics title has come to only an exclusive few programs.

Up until 2013, only four teams had won NCAA championships in Georgia (10 titles), Utah (9), Alabama (6) and UCLA (6). Florida broke into the elite company by winning in 2013. The Gators and Oklahoma shared the title in 2014, Florida made it a three-peat in 2015, before the Sooners snared the crown the last two years.