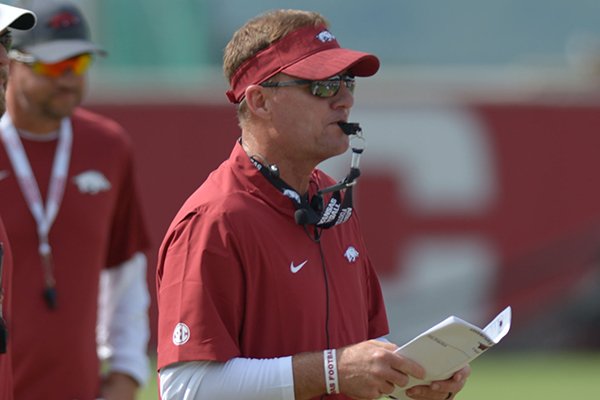 • Chad Morris says Kim Dameron, the EIU head coach and former Razorback, is "very well though of in the profession" and "is no stranger to big games" during his time as an assistant coach.

• Morris calls EIU a "dangerous" team that is good on offense and defense. He calls Saturday an opportunity to write a new story in Arkansas' history.

• Morris says the Razorbacks "are nowhere near a finished product" offensively, but have gotten better in a short amount of time.

• Morris says there is a lot of uncertainty against EIU. He calls the Panthers "a scary team."

• Morris expects EIU to play two quarterbacks - Harry Woodbery, a transfer from Navarro Junior College, and Johnathan Brantley, a transfer from Tulane. Woodbery was quarterback for EIU's new offensive coordinator at Navarro, and Morris said he has coached against Brantley while he was at SMU.

• Morris says all quarterbacks had "substantial reps" during camp. He indicated that Kelley was the most consistent over his time as the Razorbacks' coach. He knew late last week that Kelley had the upper hand, but Storey continues to get some first-team snaps in practice.

• Kelley earned the right to start, Morris said, but "it doesn't ensure he's the finisher."

• Morris said he has played two quarterbacks in the past, including at SMU.

• Dalton Wagner has been cleared to practice again after having his appendix removed last week. There is no update on Jalen Merrick.

• Asked about the freshman quarterbacks, Morris says both are fierce competitors who support one another. He says the entire quarterback competition has been healthy and Morris says he wants to continue to see that as the season progresses.

• Morris says John Stephen Jones and Connor Noland will play at some point this season, maybe as early as Saturday. "I want them ready and prepared and engaged as if they were the starter," Morris said.

• Chase Harrell, the transfer from Kansas, has been battling a hamstring injury but is expected to play, Morris said. Harrell is the backup to La'Michael Pettway at the boundary receiver position.

• Ryder Lucas and Michael Woods, who both were arrested during the off-season, will be suspended for the first game.

• When the players were shown the inside of the stadium renovation over the weekend, Morris said the reaction was great with players yelling, jumping up and down, and taking photos and videos.

• Morris said there are a lot of similarities to the Dallas Cowboys' AT&T Stadium in the players' entrance to the renovated stadium.

• D'Vone McClure, Grant Morgan and Connor Limpert were awarded scholarships last night. All three previously were walk-ons. Morris said the decision was made based on their performances during the preseason camp.

• The office area in the Fred W. Smith Center has been renovated the past few weeks. Morris said staff sizes were much smaller when the building was finished in 2013, and the upgrades were needed to address office space for everyone on the staff.

• Chavis reiterates that Arkansas expects to see two quarterbacks from EIU on Saturday. He indicates it is tough to fully prepare because of all of the unknowns for the Panthers, who changed offensive schemes in the off-season.

• Chavis says Arkansas could play as many as six defensive ends and seven defensive tackles against EIU.

• Nate Dalton and Derrick Munson will back up D'Vone McClure at nickel back. The two-deep depth chart lists three linebackers, but the Razorbacks are likely to play five defensive backs in several situations.

• Craddock, like Chavis and Morris before him, calls the new game-day locker room a "game changer," and says it is among the best in the nation.

• Craddock says Cole Kelley was more consistent over the past two weeks and more routinely led the team to points in scrimmages.

• Craddock says he feels good about the offensive line, where three players - left tackle Shane Clenin, left guard Kirby Adcock and center Hjalte Froholdt - will make their first start in their position Saturday. He indicates Froholdt's past on the line helps from a leadership standpoint.

• Kelley has shown the courage and ability to take big hits, Craddock said. Those, along with his big arm, are his best attributes at the position.

• Craddock says he expects a lot of different looks and blitzes from EIU's defense Saturday.

• Craddock says receiver Chase Harrell was able to go through eight practices. He calls Harrell a "big body that not a lot of defensive backs want to bring down."

That is the end of the press conference.