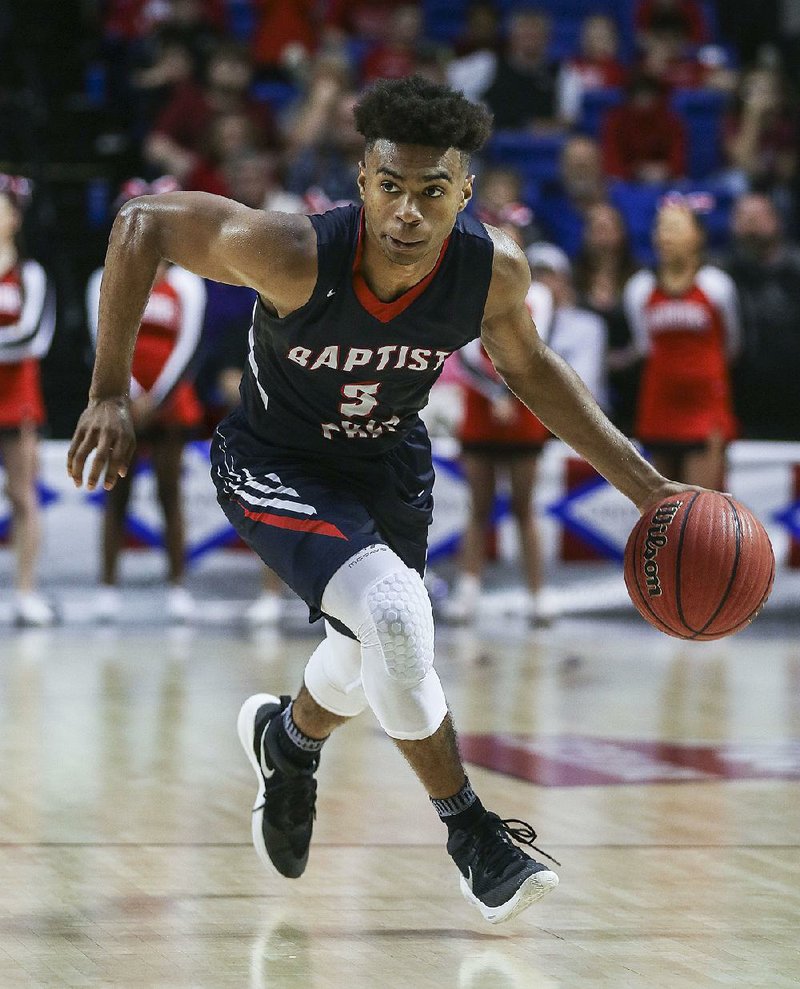 Baptist Prep guard Issac McBride, who played for the 17-under Joe Johnson Arkansas Hawks this spring and summer, received an Arkansas offer Monday.

McBride (6-1, 185) added several offers — including Kansas, TCU, Auburn and Tennessee — after an outstanding showing at the FAB 48 in Las Vegas in late July.

Thoughts on the Arkansas offer?

“I feel like it was an honor. Arkansas has always had a great program, and they’ve always tried to do things the right way, and they’ve had some successful people, so it was really cool.”

“I have visits to those four places mainly in the month of September. I know TCU is on the 15th, then after that it’s Auburn and after that is Kansas, and then I don’t know. We’re not set in stone about the Tennessee visit yet.”

What does the Arkansas offer do for the Hogs’ chances to get the last visit?

“I really haven’t discussed that, to be honest. We’re still looking at what we can fit in. We’re going to pray about it and talk with my family and see concerning the visits.”

How did the Arkansas offer happen?

“Coach [Mike] Anderson and Coach [Melvin] Watkins called my dad. They told him first. and then Coach Anderson called me.”

What did Coach Anderson have to say?

“They just talked about how they’ve been watching me since the ninth grade and how they wanted to see how I developed and if I checked their boxes with the way I played. That’s pretty much it — how I developed.”

Have you talked to Hawks teammate and Arkansas point guard commitment Justice Hill?

When do you think you’ll make a decision on the last visit?

“To be honest, I have no idea. I’m trying to see what days are left for visiting and what my parents think about it, and we’ll sit down and discuss that and see what happens with that situation.”

The Arkansas offer came later than the others. Does that impact their chances?

“Really, to be honest, I feel like them coming late was just a decision made by them. Coming late is better than not coming at all. I’m really praying about which school is best for me, consulting God and seeing where he’ll want me to go and talking to my parents. I feel like coming late, it really doesn’t matter. It’s really just ultimately up to me — and with the help of my parents to make the decision — where I’d like to continue my next four years and where I would like to develop. I really don’t have any comments on that; I’m just taking it day-by-day.”

Any other schools you’re considering for that fifth visit?

“I really haven’t thought about it, to be honest. I had those four dates set because those are the four dates that were open. We’ll sit down and talk about it, and most likely we’ll have a decision soon if I’ll take the fifth visit or not. There’s just a lot of stuff going on right now. I’m just trying to ultimately stay in the gym and get better, and I’ll probably end up making that decision soon.”

Plan to sign during the early signing period in November?

“I’m planning to be able to make a decision very early. Not too early, but early, considering the long season. I want to make it before basketball season gets here and be able to sign. And if I have the opportunity to sign early, I would love to do that.”