Arkansas OL pledge Rathcke has a date with the Dome 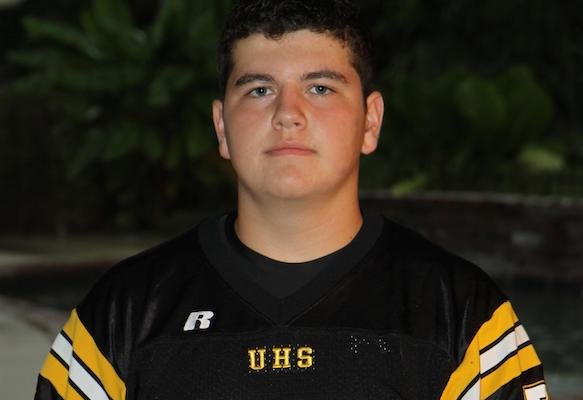 FAYETTEVILLE — Unlike Arkansas’ other six official visitors this weekend, Razorback offensive lineman commit Dylan Rathcke won’t be around for any Friday festivities.

It’s because he’s got a date with the Dome once again.

Lab will be trying to extend its winning streak to 27 straight games and will be doing it against the last team to defeat the Cubs in 2016.

“We went there last year to win the state championship and it was crazy,” Rathcke said. “It definitely looks bigger from down on the field than in the stands and it is just an awesome experience. We have worked hard this season to get back and experience that feeling again.”

The Cubs are averaging 48.1 points per game this season and have scored 40 or more points in every game but one.

“Really the team that we have right now has been together for a long time,” Rathcke said. “Over the years we have just gotten to know each other and molded together into a good team and I think they is the reason we have been winning so much.”

Lab has outscored its opponents 578-114 this season for head coach Chad Mahaffey. The team is loaded, with four of its stars heading to play at SEC schools.

Linebacker Christian Harris (6-2, 240) flipped his commitment from Texas A&M to Alabama earlier this week; Rathcke is headed to Arkansas; linebacker Makiya Tongue (6-2, 210) to Georgia; and tailback Tyrion Davis (6-1, 230) to LSU.

“I have to give credit to Coach Mahaffey, who has had some great strategies and play calling,” Rathcke said. “Not only that, but we have a lot of talent on our team and so we have been able to put up a lot of points each game.”

Rathcke chose Arkansas over Kentucky, Louisville, UAB and others.

“Really is was just sitting down and talking to Coach Dustin Fry and Coach Chad Morris,” Rathcke said. “It was really an eye-opening trip to Arkansas because we didn’t know much about it and had never been there.

“But after we left, my whole family started talking about it and we couldn't find nothing that we didn’t like about the situation. Usually when we had gone to visit schools, at least one of us had some reservations about that place, but that was not the case with Arkansas. It was nothing but good.”

Rathcke wasn’t bothered by the Razorbacks’ 2-10 season because of the 2019 recruiting class, which is ranked 12th nationally by Rivals.

“I definitely believe that we have a bright future at Arkansas,” Rathcke said. “I have talked to the other offensive lineman commits, not in person, but on the phone, just getting to know them and I really believe they are good people.

“I think we are all going to come in and fight to get Arkansas back on track to being a great, great program.”

Rathcke’s development has been advanced by working with two former NFL players in Kevin Mawae and Dillon Farrell, and strength trainer Keith Ballard.

“Keith Ballard has helped me with agility and just being fast-twitch on the field, while Kevin Mawae and Dillon Ferrell have helped with footwork and just honing down on abilities," he said.

Rathcke has been to several LSU games while growing up in Baton Rouge, but hasn’t been a die-hard Tigers supporter.

“I think it is going to be awesome being able to play against them," he said.