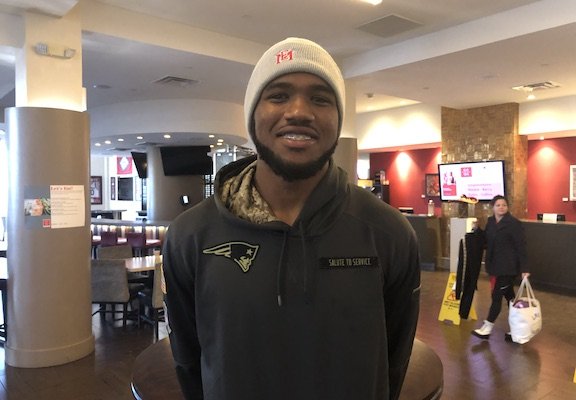 Arkansas defensive coordinator John Chavis loves to rush the passer when he has the talent to do so.

It could be a match made in heaven, according to Martin, who finished up his official visit to Arkansas on Sunday.

"Being able to rush the passer is what I like to do,” Martin said. “That’s a good fit.”

Chavis, who was the defensive coordinator at LSU from 2009-2014, is looking at Martin as a outside linebacker and he welcomes the chance to play for a man dubbed 'Chief.'

"A great guy, a loyal guy,” Martin said. “He goes back to LSU, so I've got history. His resume speaks for itself."

Martin signed with LSU out of high school after having 33 sacks his senior season for New Orleans, La., McDonough 35, where he was a teammate of Razorbacks safety Joe Foucha.

He played in five games for LSU as a true freshman before heading to EMCC, where he had 36 tackles and 6.5 sacks this season as the program won its second straight national title.

Martin, hosted this weekend by Razorbacks linebacker and Louisiana native De'Jon "Scoota" Harris, ballooned to 255 pounds while at LSU, but got his mind and body right at EMCC.

"It helped me off the field to humble myself," he said, "and finding myself to be sincere to my craft and do things that I didn't normally do in the beginning.”

Martin has not ruled out committing to Arkansas, but also may take visits to Oklahoma and Kansas before making a decision.

"I have one more lined up, maybe two, depending on how it goes with certain things,” Martin said.