State of the Hogs: Fletcher ready for West Coast competition 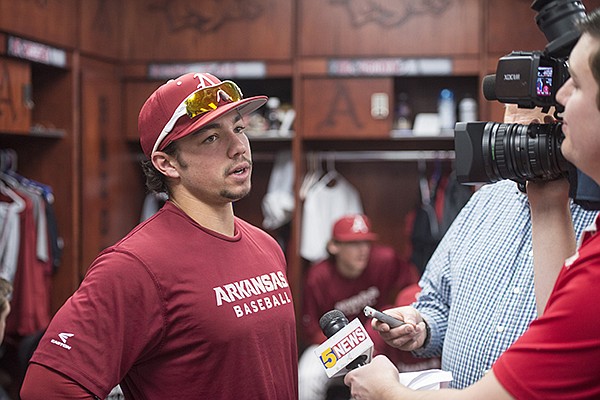 FAYETTEVILLE — Arkansas will see lots of teams from the West Coast in the coming month. There's a trip to San Diego for four games, along with a three-game series in Baum Stadium against Southern California.

It's an inviting slate for Cypress, Calif., product Dominic Fletcher, the sophomore center fielder for the Razorbacks.

“Yes, I'm excited,” said Fletcher, noting there were a lot of old friends scattered throughout the rosters of the early-season foes that also include Arizona, Cal-Poly, San Diego State and San Diego.

Fletcher is expected to hit early in the lineup. He's stepped up to that challenge in winter scrimmages, leading the team with four home runs when the team has been outside in Baum Stadium this preseason. It's hard to measure home runs when they are hitting inside the Fowler Family Indoor Center and that has been often with cold weather in the last week.

Arkansas coach Dave Van Horn saw enough of Fletcher in the first weekend of practice to recall what it was like to watch Andrew Benintendi slam 20 homers as a sophomore. It was enough to put him into the first round of that summer's draft.

“I'm just glad Fletcher is not draft eligible like Benintendi was as a sophomore,” Van Horn said. “Fletcher had a good freshman year, but not great. He hit 12 homers and that's pretty good, but I wouldn't be surprised to see him hit a lot of home runs this season. I think he's ready for a great sophomore season.”

Fletcher has some lift to his lefty swing that does naturally lead to home runs. He's listed as 5-9, 175 pounds, but he's clearly bigger than that after a strong fall in the weight room.

New strength and conditioning coach Blaine Kinsley has helped Fletcher with his legs. There's a lot of new muscle there.

“Coach Kinsley's drills are a lot different than what we've had in the weight program,” Fletcher said. “What we did in the past was more geared to flexibility and mobility. What we are doing now – with still some components for flexibility – are designed to gain strength and add weight.

“I got bigger fast. I also wanted to get faster and the leg strength helped there. I am faster. I think this strength will lead to more home runs, too. I am up 10 pounds.”

There are also some new drills from hitting coach Nate Thompson that seemed perfect for Fletcher's already solid stroke.

“What Coach Thompson brings plays into what I was trying to do,” Fletcher said. “I am a drive-the-ball guy. He gives you freedom and we know he’s had success. He has drills to get you warmed up, heavy bats and things to create extension. It’s all things to create more power.”

Some of those drills include new “toys” in the indoor facility. There is a boxing heavy punching bag, longer bats and also some wooden bats with screws attached to the barrel to hook to elastic bands.

“We have enjoyed what he's given us,” Fletcher said. “He doesn't make you change anything. He just shows you knew things. He's not going to try to fix something that's not broken, but we know he's really good on the technical aspects of the swing. He's helped us.”

The Hogs open the season Feb. 16 with a three-game set against Bucknell. Then, there's the four games in San Diego, three of them in the Tony Gwynn Challenge. There is a game against Arizona on Feb. 21 that is not part of the event.

It's part of one of the most difficult schedules Van Horn has ever attempted. Fletcher said the Hogs embrace the tough slate.

“It's very tough,” Fletcher said. “We wanted it and I love playing the west coast teams. We want a chance to be a national seed, host a super regional. You do that by competing against the best over the course of the season.”

Fletcher was recruited by most of those teams they'll see from the coast.

“Yes, but it really wasn't ever something that I thought might happen,” he said. “I told them all when I was a sophomore in high school that I was going to the SEC. I visited Arkansas and committed right away and it was over. So I never really got involved with those schools.”

Fletcher thinks the Hogs will improve as a team. They were good last year when they finished 45-19 overall and 18-11 in the SEC.

“We've got a lot of veterans and a lot of guys who have done well,” he said. “The freshmen are terrific, all very talented. They jumped in and followed the older players. I think our leadership is very good. We've got about eight guys who could be captains.”

The captains are Grant Koch, Isaiah Campbell and Jax Biggers.

“I like the mentality throughout the team," Fletcher said. "It's a great blend from our older guys to the young ones, all really good talent.”

The pitching is deep.

“What we have with the return of Isaiah Campbell, Keaton McKinney and Cody Scroggins and then addition of some of the new guys like Jackson Rutledge, Bryce Bonnin and Caleb Bolden is that we have a lot more options on the mound," Fletcher said.

“I have faced Campbell since we came back. He's consistently 95 to 96 (mph) and with just great stuff. Not many will be scoring runs off of him.

“What I see is that everyone on our staff is better than last year. Of course, Blaine Knight and Isaiah Campbell stand out, but the rest of the guys are all better, too. You see better curves, better change-ups.

“We've got depth on the mound, but depth in our lineup, too. There is depth everywhere.”

The Hogs did lose some studs to the draft. Power man Chad Spanberger with 20 homers did not return for his senior season. That wasn't all bad. Fletcher got his jersey number. He'll wear No. 24 this season.

It could be that Fletcher hits in the same two hole in the lineup as Spanberger did last season.

“You see that a lot more, a power guy up front,” Van Horn said. “You get him more at bats and it kind of jump starts things a little faster.”

That brought a big smile to Fletcher's face. Things are shaping up for a fun season, especially with the early West Coast flavor to the schedule.

“It's a challenge,” Van Horn said. “Those teams have an advantage. They are outside in 70-degree weather right now. We understand that. It helps to be outside. We'll catch up to them (with weather) eventually.”