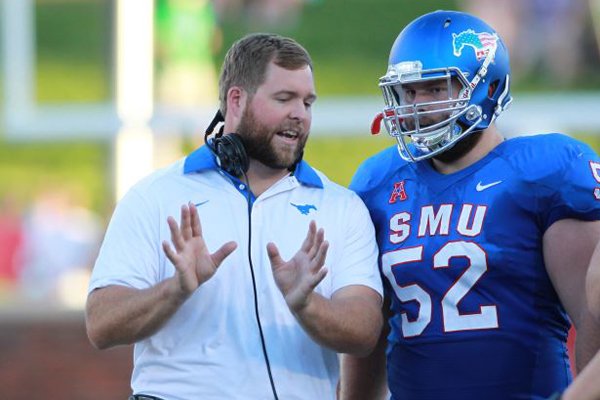 Dustin Fry spent three seasons as offensive line coach at SMU. Fry is expected to have the same position on Chad Morris' staff at Arkansas, but no hires have been officially announced one month after Morris was hired as head coach.

Arkansas football received its first commitment for the 2019 class Saturday after hosting multiple top prospects, and there’s a chance another pledge could come from another weekend visitor.

Offensive lineman Joseph Stone, 6-8, 340, of Hewitt-Trussville High School in Alabama was one of about 40 visitors Saturday, and he left Fayetteville impressed.

“I thought the campus and coaching staff was amazing and coach Chad was really motivated,” Stone said. “The program as a whole is really nice, and their educational center just for athletes is really nice.”

He received an offer from the Hogs during the visit, and he now has the Razorbacks at the top of his list.

“Arkansas is definitely at the top,” Stone said. “I really enjoyed my visit this weekend.”

Hewitt-Trussville has several other highly regarded prospects that have offers from the Hogs and others. Stone plans to encourage his teammates to check out Arkansas.

“Going to tell them they definitely need to visit,” Stone said. “It’s an awesome experience, and the coaching staff, facility, and atmosphere are amazing.”

Stone, who plans to major in business management, was able to spend one-on-one time with offensive line coach Dustin Fry.

He said he wasn’t tempted to commit to the Razorbacks during the visit.

“No, I’ll end up committing before spring or after spring,” Stone said.